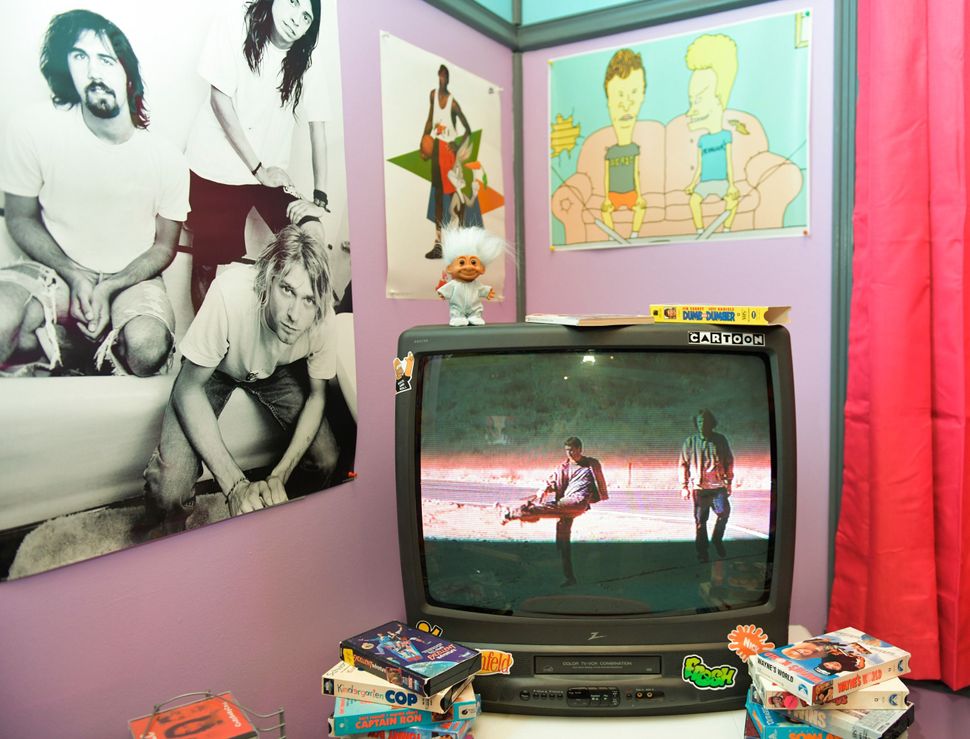 A “Beavis and Butt-Head” poster in a model ’90s bedroom. Image by Getty/Rodin Eckenroth/Contributor

Beavis and Butt-Head, those eternally immature adolescents, are returning right when we need them most — this time on Comedy Central. It’s good news, but this fan counts himself hesitant.

The reboot is said to be a re-imagining of the franchise, and I’m comfortable knowing show creator Mike Judge is behind the project. But I fear that the show’s new distance from MTV might mean we lose one of the cartoon’s calling cards: Music video commentary. Fearing that we may never get the boys’ take on Billie Eilish or Greta Van Fleet, I revisited some of my favorite clips. I know I can’t be alone in my apprehensions, so I’ve decided to share Mssrs. Beavis and Butt-Head’s best reactions to Jewish musical artists.

Beavis encourages a teacher to slap and kick a student who defaced a textbook before launching into a verbatim recitation of said teacher’s dressing down of his pupil. Beavis and Butt-Head’s enthusiasm soon wanes, however, lamenting a lack of explosions and calling Dee Snider and crew “old fat guys in clown makeup.”

KISS “I Love it Loud”

We learn a lot about Butt-Head here. He loves KISS. He likes it when Gene Simmons wags his long tongue. But most disturbingly, he claims to have made a habit of assaulting mimes at fairs. Per Beavis: “These mimes [the bandmembers of KISS] are cool ‘cause they like, make lots of noise and scream.”

When these two high schoolers establish that this music video from the chanteuse often referred to as “the Israeli Madonna” is in fact “foreign,” they can’t contain their laughter — cultural sensitivity is not their strong suit. Referring to Haza’s headdress, Butt-Head suggests she’ll use its coin-shaped medallions at the arcade. He later queries Beavis if the video, filmed in the Middle East is “about Jesus.” Unlikely — Haza’s a Yemeni Jew.

Butt-Head loves watching the Beastie Boys break stuff and run around on rooftops. He likes it so much that he tells Beavis (who appears to think the Spike Jonze video is in fact a preview for the video) to shut up and let the clip play. He is unsuccessful.

These two make a snap judgment about Susanna Hoffs, declaring her and her bandmates “rich chicks” who would never date them. Given that Hoffs was often busy batting away the advances of this song’s writer (friggin’ Prince), this checks out.

Did you know Daryl Hall converted to Judaism to marry his first wife? They split a few years later, but he’s still Jewish. Anyway, Beavis sagely notes that Hall’s “hair is cool cause it looks like mine.” Indeed.

David Lee Roth “Just A Gigolo/I Ain’t Got Nobody”

As Roth entered his solo career, he made many missteps, including this jaunty cover of a 1920s Austrian tango popularized by such names as Fats Waller and Bing Crosby. The singer looks ridiculous riffing on other, more popular artists of his time, twirling up a spiral staircase and modeling a Fabio-ready white blouse. Butt-Head: “This dude used to be the lead singer for Van Halen. They’ve got that video “Right Now”… right now David wishes he had his old job back.”

The gruesome twosome find the cold open for this Ramones video rather sedate, but Beavis perks up when he thinks he sees Butt-Head’s alcoholic uncle Jack making a cameo. Butt-Head counterpunches Beavis’ reminder of an embarrassing family member by calling his mom a prostitute. Beavis proposes introducing “Prostitute teachers” to their school.

Beavis and Butt-Head do not handle Bolton’s transition to rock well. Realizing the soft pop idol had turned to harder fare, Butt-Head admits to soiling himself before opining, “He could probably make any kind of music suck.” (Clearly Mike Judge is no fan of Bolton’s.)