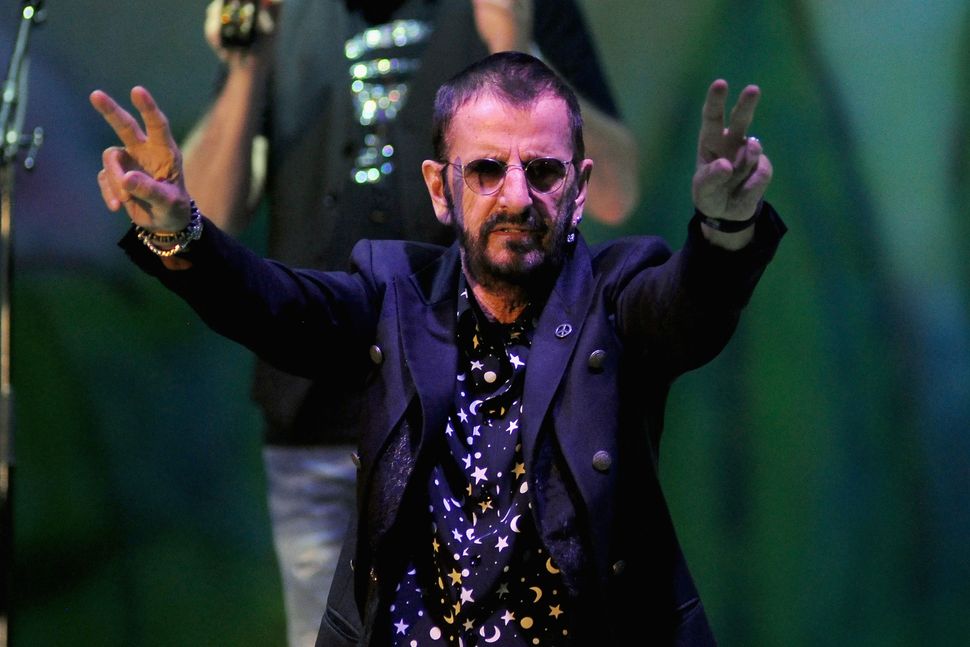 Editor’s Note; An earlier version of this story was published on July 7, 2020.

Ringo Starr isn’t Jewish, but that didn’t stop a group of Canadian separatists from issuing a death threat against Starr for “being Jewish” in September 1964, before the Beatles were scheduled to perform in Montreal. Starr reportedly wound up playing the concert with an armed bodyguard seated beside him, with his ride cymbal angled upwards the better to shield him from the crowd. Starr recalled in The Beatles Anthology, “Some people decided to make an example of me, as an English Jew. The one major fault is I’m not Jewish.” The Beatles never did play Montreal again.

No one can trace how the rumor that Starr was Jewish originated. All the speculative reasons that have been floated fall flat upon logical examination: because his real name was Richard Starkey; because his parents were confectioners; because he just simply “looked Jewish.”

The Liverpool-born drummer and member of the Beatles, born 82 years ago on July 7, 1940, did in fact have a Jewish stepfather. His biological father, Richard Starkey, only stuck around for a few years and then disappeared, presumably in a haze of alcohol and gambling. His mother, Elise Gleave, remarried to a Jewish man named Harry Graves when young Ritchie, as he was called to distinguish between him and his ne’er-do-well father, was 14 years old. Ritchie grew up in Dingle, one of the poorer, rougher neighborhoods in Liverpool. Even today, Beatles-themed bus tours of Liverpool that take fans to all the Beatles’ childhood homes skirt the area where Ringo grew up, with guides just pointing down a long street, curtly noting, “Ringo lived down there.”

A sickly child, Ritchie spent much of his youth in hospitals and convalescent homes, having variously contracted appendicitis, peritonitis and tuberculosis. His love of drums was an outgrowth of a stint playing in a hospital band. His stepfather Graves was an ardent fan of big-band music and vocals; one of his favorites was Dinah Shore, born Fannye Rose Shore to Russian-Jewish immigrant shopkeepers in Winchester, Tenn. Seeing how much Ritchie was devoted to music and particularly to the drums, Graves gave Ritchie his first drum kit as a Christmas gift in 1957.

Ringo shared his stepfather’s enthusiasm for the music of that era, whose influence would be made manifest on Starr’s debut solo album, “Sentimental Journey,” which featured Starr – previously known for singing such Beatles novelties as “Yellow Submarine” and “Octopus’s Garden” – tackling pre-rock pop standards, including “Love Is a Many Splendoured Thing” by Sammy Fain (the son of a cantor, born Samuel E. Feinberg in the Catskills) and Mort Dixon’s “Bye Bye Blackbird.”

The Beatles were more than just the Fab Four. They were a corporation, and other than record producer George Martin, almost all the significant corporate roles were filled by Jews, from manager Brian Epstein to lawyer David Jacobs to concert promoter Sid Bernstein to New York City DJs Murray the K (Kaufman) and Cousin Brucie (Meyerowitz). Slovakian-Jewish photographer Dezo Hoffman was their “official photographer” for a number of years in the mid-1960s; filmmaker Richard Lester (born Richard Lester Liebman) directed their two comedy films, “A Hard Day’s Night” and “Help!”; and Jewish hairdresser Leslie Cavendish — who learned his craft from Anglo-Jewish hairstylist Vidal Sassoon and who volunteered in Israel in June 1967 in the wake of the Six-Day War — styled the Beatles’ tresses in the mid-to-late 1960s.

Influential British music journalist Penny Valentine, born of Jewish and Italian ancestry, was a huge booster of the Beatles in print and elsewhere. In 1965 she recorded the novelty tune, “I Want to Kiss Ringo Goodbye.” According to the Guardian’s 2003 obituary, “Her combination of Jewish pessimism and Italian passion did not always make the easiest basis from which to tackle life.”

In 1968, Ringo arranged for Frank Sinatra to record a revised version of the latter’s hit song, “The Lady Is a Tramp,” as “The Lady Is a Champ,” for his wife, Maureen Cox. Famed songwriter Sammy Cahn (born Samuel Cohen on New York City’s Lower East Side, and the lyricist who turned “Bay Mir Bistu Sheyn” — a Yiddish theater tune by Sholom Secunda — into a global pop hit for the Andrews Sisters by penning English lyrics to “Bei Mir Bist Du Schoen”) was engaged to customize new lyrics for the original Rodgers and Hart tune. Trivia fans take note: The resulting single was the very first recording released by the Beatles’ own label, Apple; it was therefore Apple 1 in the company catalog.

After the Beatles broke up as a performing and recording unit, Starr enjoyed some modicum of success as a solo recording artist. He had Top 10 hits with a couple of songs penned by his former bandmate, George Harrison, including “It Don’t Come Easy” and “Photograph.” He took an oldie, “You’re Sixteen,” written by the Sherman Brothers, a Jewish-American songwriting duo, all the way to number one in 1974. (Robert B. Sherman and Richard M. Sherman were the sons of Tin Pan Alley songwriter Al Sherman. Their grandfather, Samuel Sherman, was a violinist in Kiev until he fled a Cossack pogrom on 1903, settling in Prague before immigrating with his family to New York City in 1909.

In 1974, Starr became romantically involved with English singer-songwriter Lynsey de Paul. Ringo played tambourine on a song she wrote and produced for Vera Lynn, “Don’t You Remember When,” and he inspired another de Paul song, “If I Don’t Get You the Next One Will,” which she described as being about revenge after he missed a dinner appointment with her because he fell asleep in his office. Born Lyndsey Monckton Rubin into a Jewish family with Dutch, Austrian and German background, de Paul was the first British female artist to hit number one with a self-written song.

Eventually, like Paul McCartney before him with Linda Eastman, Starr wound up in a long, happy marriage to a Jewish woman. Starr and one-time Bond girl and Playboy model Barbara Bach — born Barbara Goldbach, a native of Jackson Heights, Queens — recently celebrated 39 years of matrimony. They met on the set of the movie “Caveman” in 1980 and married the following year.

Ringo Starr and Bob Dylan crossed musical paths a number of times. In addition to appearing together at George Harrison’s superstar benefit “Concert for Bangladesh,” Starr and Bob Dylan performed at The Band’s “The Last Waltz.” Subsequently, Ringo played drums on Dylan’s “Shot of Love” album.

In 1989, Starr fell upon the idea to tour with an ever-changing lineup of fellow musicians, many of whom were given their own moments in the spotlight. The first iteration included Rick Danko and Levon Helm of The Band; Dr. John; and Bruce Springsteen saxophonist Clarence Clemons. Starr continues the annual practice to this day, although this summer’s concerts have been postponed until next summer due to the COVID-19 pandemic. Starr reportedly made it a practice to call his longtime concert promoter, David Fishoff, an observant Jew, every Friday afternoon before sundown to wish him a “good Shabbat.”

In 2018, the Rock and Roll Hall of Famer and His All-Starr Band performed in Israel for the first time, defying calls from fellow English rockers and BDS supporters Roger Waters and Elvis Costello to boycott the Jewish nation. The Beatles had actually been scheduled to play Tel Aviv in 1966, but the Israeli government put the kibosh on that concert, fearing that the Fab Four would “corrupt” Zionist youth. The Israeli government issued a formal apology to the Beatles for the ban in 2008, the same year that Starr’s erstwhile bandmate, Paul McCartney, paved the way for Starr with his first Tel Aviv concert in 2008. The All-Starr Band that performed in Israel included 10cc frontman Graham Gouldman, whose teen rock band, the Whirlwinds – featuring musicians named Jacobson, Cohen, and Sperling — became the house band at his local Jewish Lads’ Brigade back in the mid-1960s.

You say it’s your birthday, Ringo. You’re going to have a good time. Ad me’ah v’esrim.