How did we forget Lucy Dawidowicz? 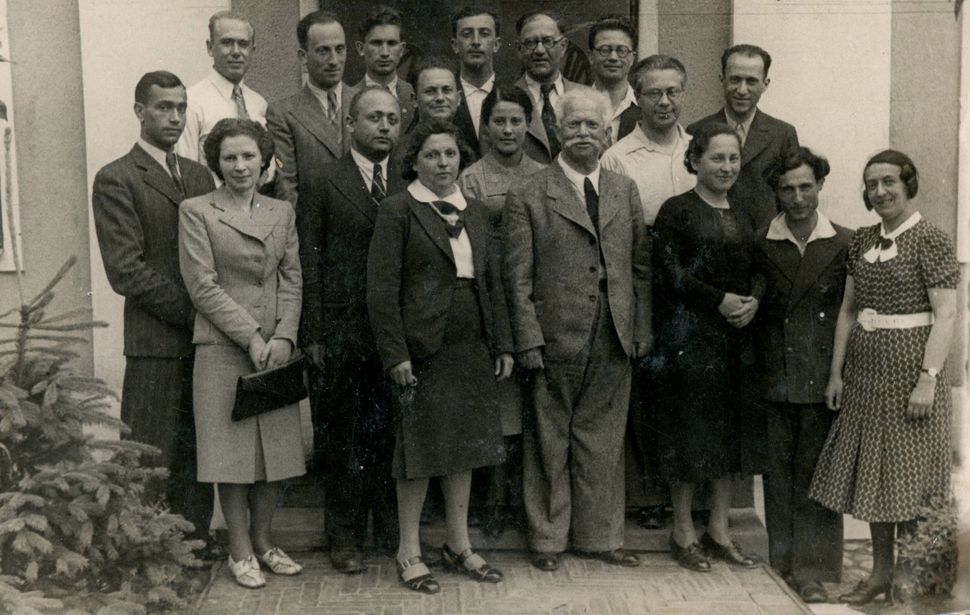 The book — which is still in print — is a popular history of both Nazi anti-Semitism and the Jewish communal response to the Nazis’ assault. The book, along with Dawidowicz’s 1967 anthology “The Golden Tradition: Jewish Life in Eastern Europe,” catapulted Dawidowicz into the public eye. Through the late 1970s and 1980s, she, along with survivor Elie Wiesel, was one of the most sought-after lecturers on the Holocaust. In 1979, she was one of the few women invited to join the President’s Commission on the Holocaust under Jimmy Carter. (She left in protest a year later.)

But today, Dawidowicz’s name and work have been largely forgotten. 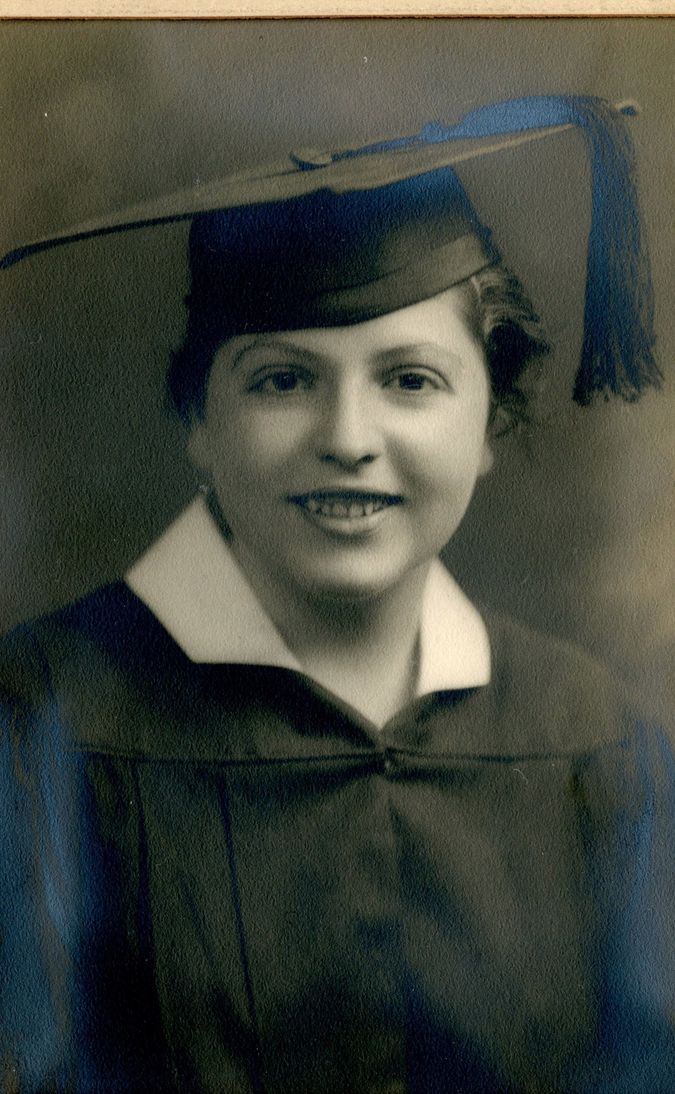 Lucy Dawidowicz, photographed at her graduation from Hunter College. Image by Courtesy of Nancy Sinkoff

Yet Dawidowicz’s person, scholarship and worldview are worth revisiting today not only to recall her seminal work on the Holocaust before it was a central feature of American Jewish consciousness, but also because of her political journey from left to right — a journey that mirrored the shift of some of the famous male New York intellectuals, like Irving Kristol and Norman Podhoretz, in the postwar years.

Born Lucy Shildkret in 1915 in a Yiddish-speaking socialist home in New York City, Dawidowicz’s life paralleled that of those male peers. She was a youthful leftist who joined the Young Communist League when she was a student at Hunter College, became an ardent Roosevelt Democrat in the 1940s, and then, in the late 1960s and early 1970s, moved to identify with neoconservatism. Like Kristol and Podhoretz — and their peers Irving Howe and Alfred Kazin — Dawidowicz had a passion for English literature and the life of the mind and always relished a political argument. She had personal relationships with many of the New York intellectuals — her archives contain marvelous exchanges with Podhoretz, as well as Howe, Kazin, Sidney Hook and Nathan Glazer — but she was different from them in one key way: Her work and identity were always deeply rooted in the particular and distinctive culture and history of Eastern European Jewry, which she tirelessly defended.

Alienation from America and discomfort with Jewish identity were the cultural prerequisites of the New York intellectuals in the 1930s and 1940s. Though some of Dawidowicz’s male peers had passive knowledge of Jewish languages and culture, they minimized, both consciously and not, the significance of their Jewish backgrounds. Their Jewishness provided a context to their identities, but little more. But Dawidowicz was driven by a deep sense of belonging to the Jewish people, and a strong connection to European Jewry.

As a child and adolescent, Dawidowicz attended the Sholem Aleichem Folk Institute’s Yiddish supplementary schools and camp, and she regularly wrote and read in Yiddish. In 1938, she made a fateful decision to sail to Vilna, Poland — now Vilnius, Lithuania — to be part of the fourth cohort of the Aspirantur, a research fellowship sponsored by the Yiddish Scientific Institute — now YIVO — through which she worked closely with YIVO director Max Weinreich. In Vilna, she met many of the Yiddishist luminaries of interwar Poland while working on a thesis on the Anglo-Yiddish press, a topic that was central to her lifelong interest in language and print culture.

Dawidowicz fled Poland after the signing of the Hitler-Stalin pact in late August 1939, taking a series of trains from Vilna to Copenhagen, where she eventually was able to board a ship home to New York. In “From that Place and Time, 1938-1947: A Memoir” (1989), she described a surreal encounter in her train compartment en route to Copenhagen from Berlin with an English-speaking German man sporting a swastika pin on his lapel. He was courteous and calm, even as he preached myths about Poland’s alleged militancy, which were a pretext for the German invasion on September 1, 1939. “It was like listening to a very polite lunatic,” she wrote.

During the war, Dawidowicz once again worked with Weinreich, who had been able to flee to the United States, joining him at the skeletal American branch of the YIVO Institute in New York. Together with a group of refugee scholars, they endeavored to keep the Institute going while watching, terrified, as the war unfolded. After the war, Dawidowicz returned to Europe as an educational officer of the Joint Distribution Committee. While her official responsibilities for the JDC were prosaic, she soon found herself on the haunting front lines of postwar Jewish cultural restoration. Her most enduring achievement from the postwar period was organizing the restitution of the remnants of Vilna’s libraries and archives from the vast repository of stolen Jewish books known as the Offenbach Archival Depot and ensuring their safe shipment to New York in June of 1947. Between her work in New York and Europe, Dawidowicz’s efforts helped to establish the New York YIVO as both a distinguished American Jewish research center and as a critical institutional link to the East European Jewish past.

Back in New York, Dawidowicz married Szymon Dawidowicz, a Polish Jewish immigrant who had lost his family during the Holocaust, including a beloved daughter who perished in the Warsaw Ghetto Uprising. Dawidowicz soon went to work for the American Jewish Committee, first as a secretary, then as part of its research team. Her department was central to the AJC’s Cold War liberalism, which worked to combat communism by championing American political pluralism, capitalism and faith as a bulwark against Soviet totalitarianism.

With her expertise in Yiddish, the history of Jewish communism and the Jewish press, Dawidowicz authored countless anti-communist memos to debunk the myth of the Jewish communist, which had been a foundational trope in Hitler’s anti-Semitic arsenal. Dawidowicz was also deeply involved with the Committee’s work on what were then called “Negro-Jewish” relations, analyzing the urban crisis of the mid-1960s and the growing radicalization of the civil rights movement. Her third field of expertise was church-state relations. Her memos from that period show that Dawidowicz had begun to question the wisdom, in terms of Jewish communal cohesion, of the Committee’s stance on the inviolability of allowing religious expression in the public sphere.

Over the next two decades, that questioning would lead to a full-fledged political turnaround motivated, in great part, by Dawidowicz’s fear that American civil society was breaking apart.

By the late 1960s the fabric of the democratic liberal America that Dawidowicz, like so many East European Jewish immigrant children, had taken for granted — and which had been so hospitable to Jewish integration — seemed irrevocably torn by the decade’s culture wars and political and social upheavals. And the almost universal euphoria that had, in America, greeted the establishment of the State of Israel in 1948 had been replaced by a steadily mounting opprobrium that reached an ugly denouement in the 1975 “Zionism is racism” resolution at the United Nations. Israel’s 1977 and 1982 wars with Lebanon and “cold peace” with Sadat’s Egypt had additionally put American Jewish liberals on the defensive.

Though never a full-throated Zionist, Dawidowicz recoiled at the steadily mounting opprobrium against Israel on the political left. Writing to Howe in the aftermath of the 1982 Lebanon conflict, Dawidowicz made her commitment to Israel clear. “The political character of the [Israeli] government,” was not the point, she wrote. “Israel [is] the embodiment of Jewish civilization and the Jewish will to survive,” and American Jews who cared about Jewish existence were obligated to support it.

By the 1980s, Dawidowicz found herself firmly ensconced in the neoconservative political camp, motivated by her fear of what she perceived as the growing anti-Semitism of the Democratic Party. She believed the views of that party’s left-wing activists had begun to poison American intellectual and political life, denying the legitimacy of Jewish group identity on its own terms. In 1984, chosen to give the prestigious annual “State of World Jewry” lecture at the 92nd Street YM-YWHA , she used her speech to implore her audience to pull the lever for Ronald Reagan. Dawidowicz came to reject the alleged innate association of Jewishness with liberalism, and remained unapologetically committed to the idea that Jewishness is a distinctive identity, viewpoints that fit uneasily into the purportedly post-ethnic, multi-cultural landscape of late 20th-century America.

At the time of her death in 1990, as today, the majority of American Jews remained aligned with the Democratic party. If in the 1980s Dawidowicz miscalculated American Jewish political inclinations, it still serves to remember her prescience. Dawidowicz presaged the deepening fissure between American Jews who consider liberalism to be a “Jewish” value and those who do not. It feels, in 2020, as if the polarization between Jews on the political left and right is more intense than ever. In her insistence that the hallowed “American Jewish liberal tradition” was historically contingent, Dawidowicz anticipated many of today’s political polarities and cultural challenges.

Nancy Sinkoff is the Academic Director of the Allen and Joan Bildner Center for the Study of Jewish Life, professor of Jewish studies and history at Rutgers University—New Brunswick and author of “From Left to Right: Lucy S. Dawidowicz, the New York Intellectuals, and the Politics of Jewish History”

How did we forget Lucy Dawidowicz?