The secret Jewish history of Santana 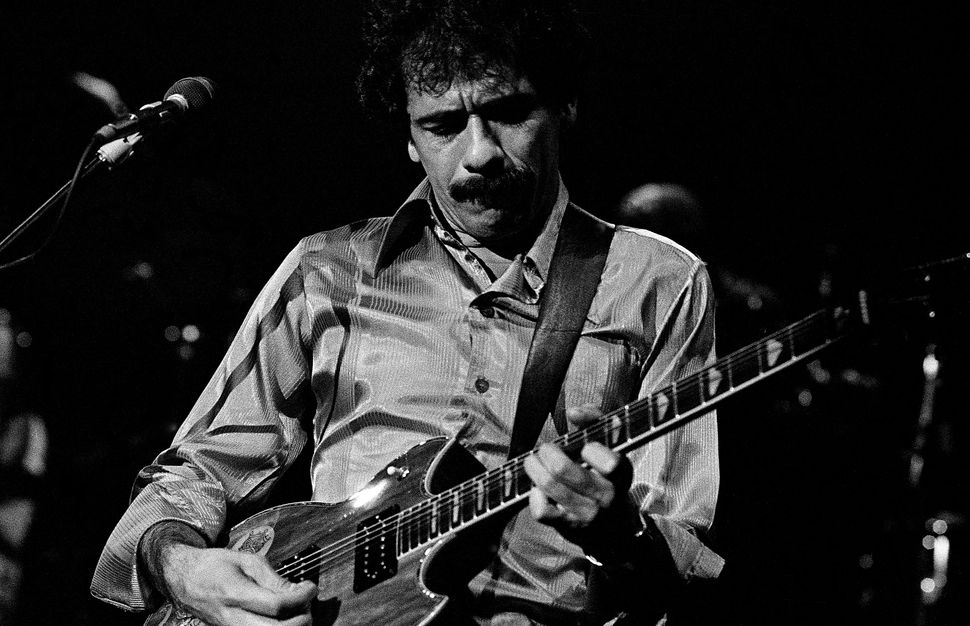 Carlos Santana isn’t Jewish. But that doesn’t stop the Latin-rock bandleader and guitar hero — who turns 73 on Monday, July 20, 2020 — from speculating on his Jewish roots, performing in Israel, peppering his dialogue with choice bits of Yiddish, or conversing with a Kabbalistic angel.

Santana, whose million-selling namesake band was founded in 1966, was born in Autlán, Mexico, and grew up in Tijuana before his family moved to San Francisco in 1962. His father was a working musician, and like any good klezmer paterfamilias, he taught his son to play violin starting at age five. By the time young Carlos was eight years old, he insisted on switching over to guitar, setting himself on a path towards becoming one of the most heralded guitarists of the rock era.

In his autobiography, “The Universal Tone: Bringing My Story to Light” (Orion, 2014), Santana describes his father as being dark-skinned and presumably of native American heritage. Of his maternal lineage he writes, “My mom’s family was lighter-skinned, European. I once saw my family tree, and there’s some Hebrew on that side of the family – there were many Jews who came over from Spain the New World after 1492. We Santanas ate pork, but my mom had some strange rules about food – what we could and couldn’t eat and when; foods that couldn’t be eaten at the same time. Some of that could have been handed-down kosher stuff.”

Perhaps this also explains his eventual fondness for a legendary Lower East Side dairy restaurant. Brought to New York City to perform at Bill Graham’s Fillmore East nightclub in the late-1960s, he recounts how “… we got to know the city on that first visit – we stayed in some hotel on 5th Avenue and walked around a lot. Bill turned us on to Ratner’s, a kosher restaurant next to the Fillmore East.”

Graham, as it turns out, played a longtime role in Santana’s life and career. One part manager, one part father-figure, the German-Jewish refugee who survived the Holocaust gave the band its first big break by presenting them at the original Fillmore in San Francisco and getting them booked at the Woodstock Festival in August 1969, where the then-unknown band played an explosive, scorching set that propelled them into the spotlight. In his memoir, Santana wrote of Graham, “he was so important in my life and had such a huge effect on my career.”

Graham died tragically in a helicopter accident in 1991. Santana paid tribute to his mentor in the 1992 song, “Gypsy/Grajonca”; Grajonca was Graham’s given name. In his memoir, Santana testifies to Graham’s oversized personality: “I have never heard someone use the word schmuck as many times as Bill did. I didn’t even know it was a word until I met him.”

In May 2019, Santana visited the Florida Holocaust Museum, the day before performing in St. Petersburg. On display at the museum was the traveling exhibition “Bill Graham and the Rock & Roll Revolution,” which includes some of Santana’s own memorabilia. While at the museum, Santana explained to the museum’s board chairperson that Graham had been like a father to him and how much he missed having Graham in his life.

Two of Santana’s greatest hits were penned by Jewish songwriters. The band’s calling card, “Black Magic Woman,” was written by Peter Green, a cofounder of the English blues-rock group Fleetwood Mac, which first recorded the song in 1968. Green was born Peter Allen Greenbaum in London, the youngest of Joe and Ann Greenbaum’s four children. Santana took the song to number four on the American pop charts in 1970. “Black Magic Woman” appeared on Santana’s second album, “Abraxas,” which featured cover art by the late German-Jewish exile Mati Klarwein, who grew up in Mandatory Palestine.

It would be nearly 30 years before Santana topped the charts again, when the group hit number-one with the song, “Smooth,” once again the work of a Jewish songwriter. The composer, Itaal Shur, was born in Los Angeles to the Russian-born Israeli-American, Bonia Shur, a composer of Israeli and Jewish music and director of liturgic arts at Hebrew Union College in Cincinnati. His mother was the Chicago-born Fanchon Wechsler, a former dancer and choreographer. Shur shared a Grammy Award for Song of the Year in 1999 with singer-lyricist Rob Thomas of Matchbox Twenty. One of Shur’s solo albums is entitled “Milk & Honey.”

While B.B. King was Santana’s number-one guitar hero, close behind was a Chicago-born-and- bred Jewish blues guitarist named Mike Bloomfield, about whom Santana wrote, “he was my number two hero, just behind B.B. [King].” In the foreword Santana wrote to a 2000 biography of Bloomfield, he recounted, “The first time I saw Michael Bloomfield play the guitar was when the [Paul] Butterfield Blues Band came to San Francisco. I was still in Mission High School. And it literally changed my life enough for me to say, ‘This is what I want to do and want to be for the rest of my life’.”

Santana continued, “We had a bond, Michael and I. He passed something to me and I have to guard it very, very carefully because what he passed down to me is that the art of music is about making a bridge between the flesh and the spirit. He did that very well.” In discussing the universality of the blues in his autobiography, Santana writes, “The Hebrew people in their prayers have got the blues. The blues is like chicken soup — it wasn’t invented in America, and we don’t own the recipe.”

Santana also reveals in his memoir that he is on a first-name basis with the angel Metatron, a figure found in Kabbalistic and Talmudic writings who is sometimes identified with Enoch, a Biblical figure taken up by G-d to be an angel with the new name Metatron. Santana recounts a Robert Johnson-at-the-crossroads-type understanding he came to have with Metatron.

Metatron promised Santana that the album “Supernatural” would be a great success, would garner widespread radio play, and ultimately be heard more widely than any of his music had been previously. After that scenario played itself out just as Metatron had promised, the angel came to collect his end of the bargain: “’We kept our promise,’ [Metatron] told [Santana]. ‘We’ve given you what we said we would. Now we’re going to ask something from you.’”

“That was when the angel Metatron said to me that it’s a must—I had to speak publicly about my past,” writes Carlos. Santana had been sexually abused as a child by a family friend, a secret he had closely guarded for many decades. One night in London, while Santana was meditating, Metatron laid out the specifics of the deal: “Now that you’re on the radio … we want you to reveal that you were abused sexually, because there’re a lot of people walking around with that same kind of wound. Invite them to look in the mirror and say, ‘I am not what happened to me.’”

As Santana tells it, he resisted at first, but Metatron kept the pressure on. Finally, in an interview with Rolling Stone, Santana recounted the tale of his childhood molestation. He also included Metatron’s role in his decision to go public with his story.

The following year, for Hanukkah, Santana appeared at the annual Bill Graham Memorial Chanukah celebration in San Francisco presented by Chabad, the Orthodox Jewish outreach group. Santana took on the role of the annual “ambassador of light” and was lifted in a cherry-picker to light the first night’s candle on a giant public Hanukkah menorah. The ceremony was presided over by Rabbi Israel Langer, a Chabad-affiliated rabbi who had been close to Graham.

In 2016, after a gap of 29 years, Santana brought his band back to Tel Aviv in defiance of calls that he abide by a cultural boycott of Israel. Rather than boycott, Santana donated proceeds of the concert to Hand in Hand: Center for Jewish-Arab Education in Israel, which brings Arabs and Jews together in classrooms in six schools throughout the country. Santana’s charitable Milagro Foundation had already been providing funding to the organization since 2005.

Seth Rogovoy is a contributing editor at the Forward. He frequently mines popular culture for hidden Jewish stories.

The secret Jewish history of Santana