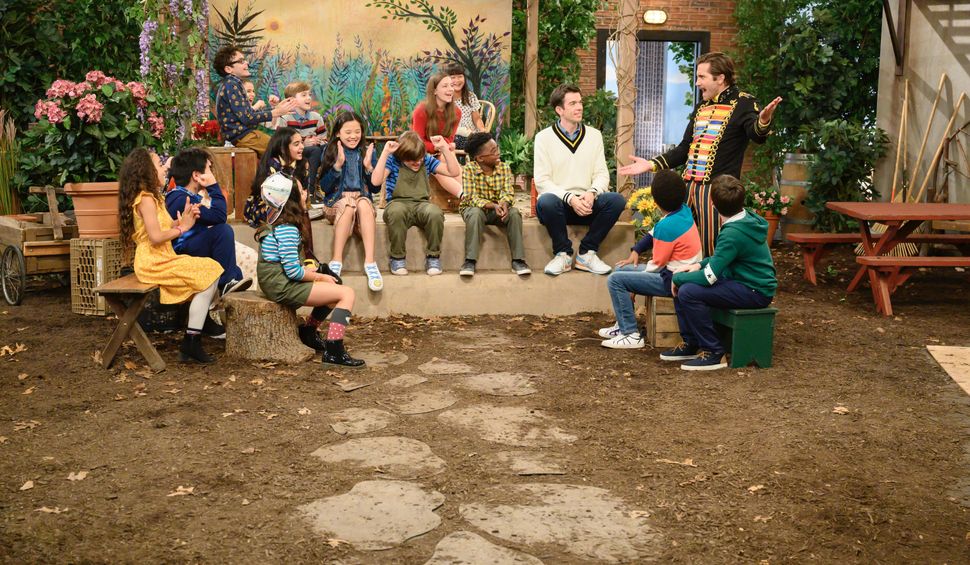 Jake Gyllenhaal appears as Mr. Music in Netflix’s “John Mulaney and the Sack Lunch Bunch.” Image by Courtesy of Netflix

This weekend, my brother Jacob sent my mother and me a tweet by the writer Emery Lord, the sort of lightly despairing social media dispatch that the coronavirus has made so common: “my toddler,” Lord wrote, “yelling from the other room while I get her a snack: ‘I am LONELY and I want a BAGEL.’”

In early March, I came home to Denver, wanting to be with my family through the pandemic. Since then, I’ve spent my working days in my parents’ sunroom, the same room in which, eons ago, Jacob and I spent our babydom squalling over who got to hold which dinosaur toys. While I’d like to think I’ve continued to professionally resemble the 27-year-old journalist who was formerly rather prideful about her independence, I’ve regressed in my personal life. Early in the pandemic, I would sometimes stand at the base of the stairs to my parents’ attic offices and let out wordless shrieks. (I called it “vocalizing existential distress;” they called it “Talya, please, we also have jobs to focus on.”) Now, too lazy to walk from my “office” to theirs, I call whoever I think is most likely to be free, and plead with them to come down two stories and visit me.

But even when I’m lonely, I know I’m not alone. Wherever he is, Jake Gyllenhaal understands me.

In late December, when we were all blindly toasting the start of 2020 and the presumable gifts it would bring, the comedian John Mulaney released a Netflix children’s special: “John Mulaney & the Sack Lunch Bunch.” At the time the special struck me as sweet in a weird way, but not particularly notable. But since I came home in March, I’ve become increasingly preoccupied by the special’s most absolutely bonkers segment, in which Gyllenhaal, in the guise of a deeply frazzled music teacher named Mr. Music, has a complete breakdown while attempting to teach the aforementioned Sack Lunch Bunch about, well, music.

When I first saw the special, I thought that Gyllenhaal’s appearance made for a nice, if unhinged, way to teach children about empathy. But since I returned to my childhood home, I’ve gone back to it time and again for a different reason: Not to feel empathy, but because it’s become increasingly clear that somehow, months before any of us had a real inkling about the dismal, head-spinning, identity-melting pandemic limbo that awaited us, Gyllenhaal managed to comprehensively capture the feeling of being alive in that purgatory. Yes, I’ll say it: Despite not actually dating from the pandemic, Jake Gyllenhaal’s performance as Mr. Music in “John Mulaney & the Sack Lunch Bunch” is the single greatest piece of pandemic art there is.

Observe: Gyllenhaal, decked out in stripes in a dizzying number of colors, enters after a vocal offstage battle with a door. For about ten seconds, things go well; then one of the children pulls out her clarinet. “Put away your skinny trumpet!” he demands, in a vaguely Italian accent. “Instruments are stupid!” The child is befuddled but quickly recovers, whereas Gyllenhaal appears, by dint of their brief confrontation, to have been forced to consider the very meat of existence: His eyes widen and lose focus; his face hollows; and he sways and shakes his head, the picture of someone who has abruptly lost every last ounce of faith in humanity. Mulaney prompts him — once, twice — to snap out of it, which eventually, he does, projecting the sort of extremely hyper energy of someone desperately trying to convince those around him that he is not on the verge of collapse. “Follow me!” he instructs the children, gleefully. Then, desperately: “But also, give me space, ok?”

Things, as you might guess, only go downhill from there.

By the end, Mr. Music has sprained his ankle, slashed open his foot, lost half his mustache, thrown that poor child’s clarinet out a window and found his only solace in the idea that nobody in the world even remotely cares what he does. In Gyllenhaal’s hands, the character is both a mystery and completely identifiable. Hanging on by a thread, Mr. Music is simultaneously terrified of and giddy at the thought of letting go. He knows that he has a great passion — he loves music — yet has become so completely frantic that he can’t take pleasure in it. He’s consumed by a profound internal void, but in a detached way, he’s also genuinely amused by the absurdity of living on such an unrelenting brink. It is very clear that the emotion that most controls him is a profound wish for someone to just fix everything. (A few minutes after shattering a wine bottle — “listen to the ruckus as you swirl Bordeaux!” he sings — he predictably steps on its shards. “There’s glass here,” he wails. “Who put glass here?”)

In other words, he is all of us, living through a pandemic. I can’t claim to have ever achieved Jake Gyllenhaal levels of suave attractiveness, but there was a not-so-distant time in my life when I was sometimes at least neatly put together. Now, it is easy for me to imagine that I, too, might soon find myself wearing an inexplicable outfit, sitting next to a toilet with my head in my hands, wondering if I will ever do a single meaningful thing again in my life. Mr. Music — manic, tragic, searching for respite, full of unrealized dreams — feels like a soul mate, a product of the same instincts that make me, an adult, occasionally feel that the world will disintegrate if my mother does not drop everything to make me a grilled cheese. By the time he’s decided it would be a wise to swing a cat by its tail so the children can experience the tonal nuance of its screech — don’t worry, the cat escapes unswung — I feel I’ve found a true companion, someone whose increasingly poor decision-making reflects my own sense of wildness in a world in which things feel, each day, more and more unglued.

“The Sack Lunch Bunch” is a children’s special, so Mr. Music’s brief, chaotic cameo has a happy ending. Welcomed into the group with open arms, despite his ever more tenuous grasp on reality, Mr. Music joins Mulaney and the children as they dance on a pleasantly neon-lit stage. His mustache is still falling off his face, he’s lost the brightly-hued military jacket he was wearing when he entered and his shirt has come loopily untucked. But he seems, at last, to have found some sense of fleeting peace. In a hopeless time, his redemption is a low-stakes gift, a basic reminder that people can be good, and that even the most distressed among us can, with enough love from those around them, find relief. At this moment, the world may not, as Mr. Music so frequently attests, appear to be thrillingly rife with natural sources of art and joy. But he leaves me with the feeling that, given time and care, that sense of easy beauty can maybe, just maybe, come back.