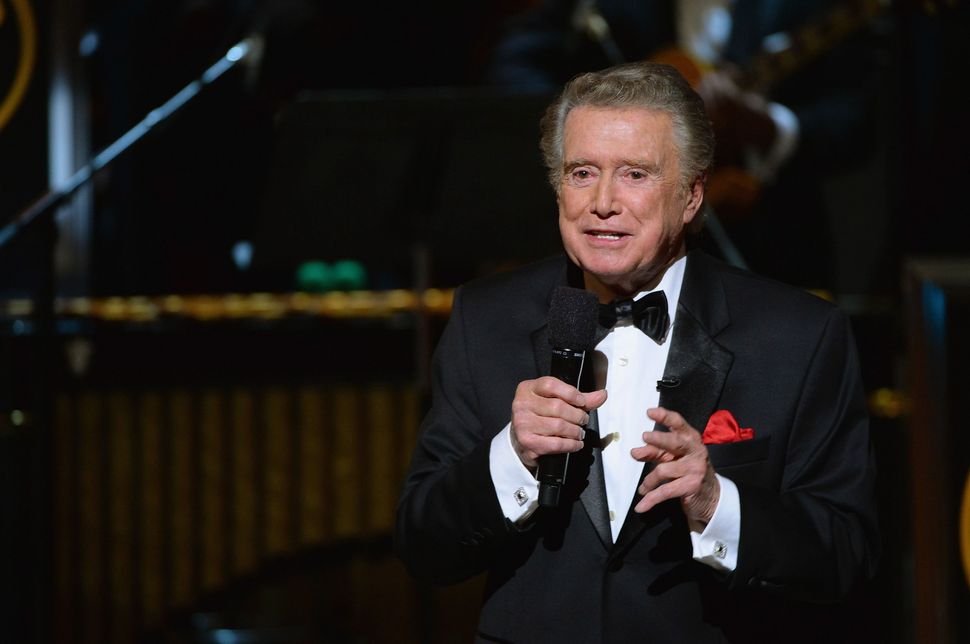 “I will never forget that silence, nor will I ever get over it,” Regis Philbin wrote in his 2011 memoir “How I Got This Way.” The moment, as Philbin describes it, was gutting. And to think it was all because of a show about nothing.

Philbin, a talk show staple who began his on-camera career as Joey Bishop’s sidekick, passed away this weekend at the age of 88. His life saw innumerable encounters with celebrities and a litany of cameos on TV and film. But a “minor (but everlasting!) quibble” was reserved for the writers of “Seinfeld.”

The beef began during the filming of the 1994 episode “The Opposite.” In it, Kramer makes a guest appearance on “Live! With Regis & Kathie Lee” to promote his coffee table book about coffee tables. Kramer ends up spilling hot coffee on Kathy Lee while demonstrating the book’s foldout legs (thus ending his book tour on its first leg), but Philbin’s problem with the script arrived before Michael Richards, as Kramer, even stumbled onto the set.

For Kramer’s introduction, the script called for Philbin to say that “this guy can be a little bonkos.” In fact, “bonkos” was to be the word of the day for all of Kramer’s antics.

Philbin objected. “’I had never said the word ‘bonkos’ in my life. I’d never even heard of the word!” he wrote in his memoir. “I mean, it just wasn’t funny — and why should I become the only ‘Seinfeld’ guest in history who never got a laugh?”

The tape doesn’t lie. The first time Philbin says “bonkos,” there are a couple titters from the crowd. The second and third times? Crickets. One could make the argument that Philbin was going too hard for the laugh, but truly, the line just didn’t work even though “Jerry, too, thought bonkos was hilarious.”

For years Philbin fulminated about this tiny feud But we can assume that Philbin wasn’t too burned by the dud of a line. He was, in fact, likely playing the situation itself for laughs.

So much of the late host’s appeal came from his unique blend of cheeriness and curmudgeonliness. Take for example, the time he surprised his buddy David Letterman while made-up like Shrek (who, ostensibly a Scottish ogre, was created by a Jew and takes his name from Yiddish).

Regis kvetched on air about Letterman’s non-reaction for all the hours of makeup and waiting in the green room. But it’s pretty clear this was all showmanship — the real gag. It made us laugh. Unlike “bonkos.”