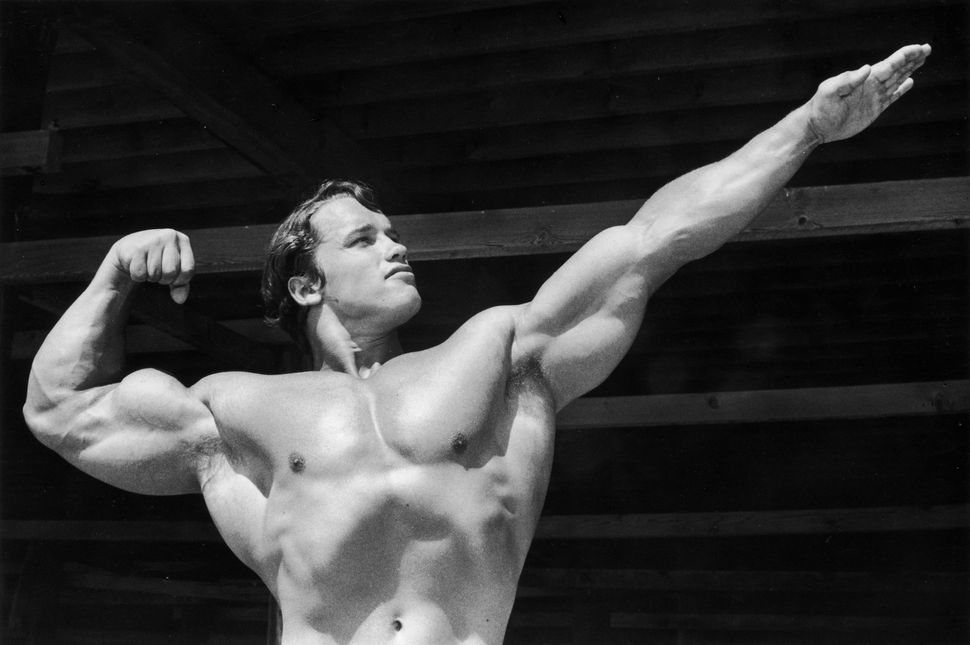 Arnold Schwarzenegger, who turns 73 on Thursday, July 30, had, at best an ambivalent and, at worst a difficult relationship with his father, Gustav. A police chief and former member of the Nazi party, Gustav was a strict disciplinarian who favored Arnold’s older brother, Meinhard. Gustav supposedly harbored doubts that he was even Arnold’s biological father. In hindsight, Schwarzenegger has described himself as a victim of child abuse. It is perhaps then of little surprise that he sought out a series of surrogate father-figures on his way toward becoming the world-famous bodybuilder, actor and politician; perhaps it’s not a surprise, either, that Schwarzenegger was drawn to men utterly unlike and even opposed to his father—Schwarzenegger’s mentors were all Jews.

Schwarzenegger grew up in Thal, a small town of about 2,000 inhabitants on the outskirts of Graz, Austria’s second-largest city. As a youth, he befriended Karl Gerstl, a medical student and bodybuilder. Gerstl’s father, Alfred Gerstl, had been a resistance fighter during the war, and later became a youth sports coach. He once told an interviewer, “I gathered the young people together for sports, but the condition was they had to listen…. Arnold was very inquisitive. He always wanted to know why we were against the Nazis. He always understood the need to protect the weak.”

Gerstl himself was the son of a Jewish father and an Austrian Catholic mother who converted to Judaism for their marriage. His paternal grandfather was a cantor in Brooklyn. Gerstl, who would eventually become president of the upper house of the Austrian parliament, took it upon himself to teach his young charges about the role of Austria in the rise of Nazism and about the dangers of anti-Semitism and fascism. Schwarzenegger became a frequent guest at the Gerstl home, and the two enjoyed a lifelong bond. In 1999, Schwarzenegger served as Gerstl’s best man when the widower finally remarried. Gerstl came to Schwarzenegger’s defense when the latter, as a gubernatorial candidate in 2003, was accused of being an admirer of Hitler’s. Gerstl recounted a story wherein Schwarzenegger and a group of bodybuilders chased a group of neo-Nazis out of Graz. Schwarzenegger returned to Graz in 2007 to celebrate Alfred Gerstl’s 84th birthday. (Schwarzenegger won office and served two terms as California governor, from 2003 through 2011.)

When Schwarzenegger first moved to the United States in 1968 at age 21, he made a beeline to Venice Beach — or “Muscle Beach,” as it was known — in Los Angeles. It was there that he met the two men who would foster his career as a bodybuilder on his way to winning the Mr. Universe and Mr. Olympia contests multiple times.

Like most aspiring bodybuilders at Venice Beach, Schwarzenegger began working out at a local gym named Gold’s, run by Sidney “Joe” Gold, whose parents, Max Gold (born Abraham Mordechai Goldglejt) and Jennie (born Zelda Feierman) had immigrated to Los Angeles from Belarus. Schwarzenegger would later describe Gold as “a trusted friend and father figure.” Gold sold the Venice Beach gym in 1970, but later on, in the wake of the 1977 film “Pumping Iron,” starring Schwarzenegger and taking place largely at Gold’s, the subsequent owners were able to parlay the gym’s newfound celebrity into a worldwide empire of over 700 locations. (Earlier this year, Gold’s filed for bankruptcy, having fallen victim to the COVID-19 shutdown.)

While Joe Gold provided the space and support for Schwarzenegger’s initial foray into the bodybuilding scene, it was a guy named Joe Weider who really gave Schwarzenegger a leg up in that world. Weider, who was born in Montreal to Polish-Jewish emigrants Louis and Anna Weider, virtually invented the sport of bodybuilding. In the 1940s, he began publishing muscle magazines like Muscle & Fitness, Flex, Muscle Power, and Muscle Builder. He co-founded the International Federation of BodyBuilders (IFBB) with his brother, Ben, and he was the founder of the Mr. Olympia and the Masters Olympia bodybuilding contests. His other ventures included bodybuilding equipment, bodybuilding programs, and one of the first lines of nutritional supplements.

In Schwarzenegger, Weider found the man who would become the face (and body) of the sport. He became Schwarzenegger’s personal trainer, working with him at Gold’s Gym. Weider’s muscle-boosting supplements featured images of the young bodybuilder on their labels. Schwarzenegger penned columns for Weider’s publications, and with his string of victories in Weider’s Mr. Olympia contests, he became the most famous bodybuilder in the world.

Schwarzenegger, however, had his sights set even higher than becoming the living incarnation of Atlas. In addition to being ground-zero for bodybuilding, Los Angeles, of course, was home to Hollywood. Early roles in the Bob Rafelson comedy “Stay Hungry” and the bodybuilding documentary “Pumping Iron” caught the attention of mainstream producers, leading to Schwarzenegger’s breakthrough playing the title character in the fantasy epic “Conan the Barbarian.” It made him a Hollywood action star and gave Jewish director-writer John Milius his greatest commercial success. In addition to the “Terminator” series of films that followed, Schwarzenegger would stretch his acting talents in three films — “Twins,” “Kindergarten Cop,” and “Junior” — he made with director Ivan Reitman, whose mother had survived Auschwitz and whose father — like Alfred Gerstl — had been an underground resistance fighter.

In spite of the influence of all those Jewish father figures, Schwarzenegger did not exactly grow up to be a mensch. Over the years he faced various accusations of sexual and personal misconduct. His marriage to Maria Shriver — a scion of the Kennedy family dynasty whom he began dating in 1978 and married in 1986 — ended when Shriver learned that her husband was the father of a child belonging to a member of their household staff.

Throughout his political career and beyond, Schwarzenegger has been an outspoken supporter of the Simon Wiesenthal Center and the nation of Israel. Facing charges that his father was a Nazi while campaigning for governor, he commissioned the former to research his father’s wartime record. The study produced no evidence that Gustav had been directly involved in crimes against humanity. Schwarzenegger paid numerous visits to the Jewish state, and frequently spoke up loudly in support of Israel, calling it a “beacon of democracy and human rights” in May 2011.

More recently, Schwarzenegger has been outspoken against the rise of the far-right here at home. In the wake of the “Unite the Right” white supremacist rally in Charlottesville, Va., in August 2017, Schwarzenegger condemned the presence of hate groups in the U.S., calling on President Donald Trump to reject the support of white nationalists and neo-Nazis. “I knew the original Nazis, because you see, I was born in Austria in 1947, shortly after the second world war,” Schwarzenegger said. “I can tell you that these ghosts [that hate groups] idolize spent the rest of their lives living in shame and right now, they’re resting in hell.” Schwarzenegger pledged an additional $100,000 to the Simon Wiesenthal Center in the wake of Charlottesville, tweeting, “There is no white America — there is only the United States of America.”

Alfred Gerstl would have been proud.

Seth Rogovoy is a contributing editor at the Forward. He frequently mines popular culture for hidden Jewish stories.