Should Billy Graham — evangelist with an anti-Semitism scandal — get a statue in the Capitol? 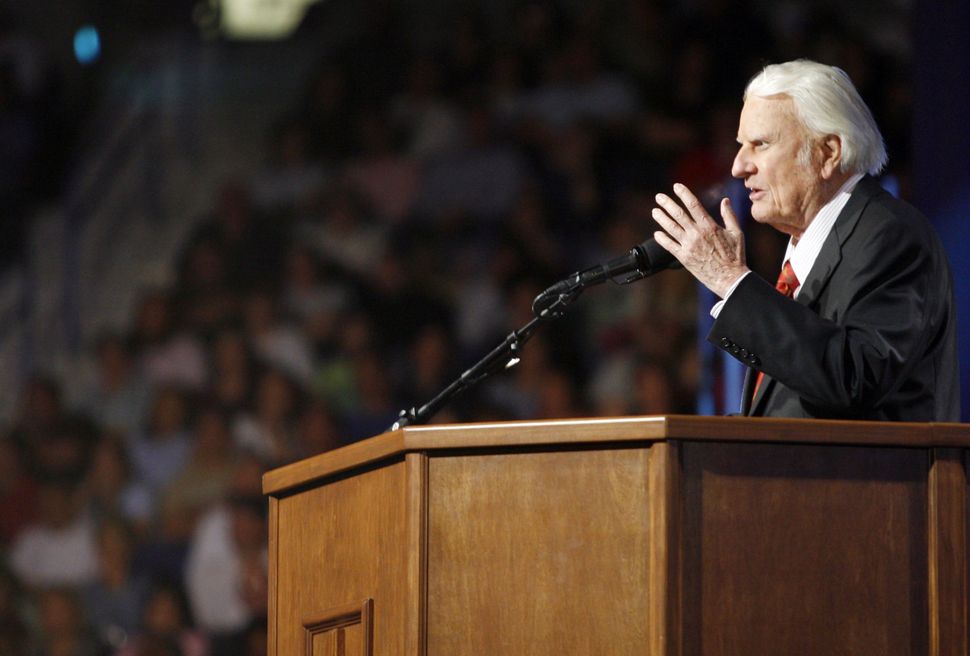 The U.S. Capitol’s Statuary Hall, where two iconic figures from every state hold court, will soon have a new resident: A clay likeness of the late Reverend Billy Graham, the popular televangelist who brought the word of Jesus Christ to the masses through a series of high-profile “crusades,” evangelistic campaigns that saw massive rallies across the United States.

For Jews and groups concerned with the separation of church and state, the prospect is a problematic one.

Last week, a North Carolina legislative committee approved a scale model of the 10-foot, 10-inch Graham statue, which would be placed at the Capitol sometime next year pending the approval of a congressional committee. If that approval comes through, Graham’s effigy will replace a statue of Charles Brantley Aycock, a North Carolina governor and white supremacist named in a House Appropriations bill calling for the removal of the likenesses of Confederates and white supremacists from the Statuary Hall.

Graham, who died in 2018 at the age of 99, was beloved by many and is certainly an improvement over Aycock, who helped engineer the overthrow of a largely Black government in Wilmington, N.C. But the preacher is controversial on several fronts. His record with regard to civil rights was mixed, as he accepted segregation at some of his crusades and critiqued the tactics of marches and sit-ins to end Jim Crow laws. Like many Evangelicals, he also believed homosexuality to be a sin, calling it a “sinister form of perversion.” And while he had a reputation for building interfaith bridges, a major rift with his relationship with the Jewish community emerged in 1994, when Nixon Chief of Staff H.R. Haldeman’s White House diaries became public.

Haldeman wrote that Nixon and Graham, alone in the Oval Office after a prayer breakfast in February of 1972, discussed Jewish control of the media. Graham denied having this conversation, but in 2002, the tape was released by the National Archives.

In the recording, Graham agreed with Nixon that liberal Jews had too much influence, saying, “This stranglehold has got to be broken or the country’s going down the drain.” Graham further accused Jews of “putting out the pornographic stuff” in the culture and contended that, while he was friendly with Jews who “swarm around me and are friendly to me because they know that I’m friendly with Israel,” those Jews “don’t know how I really feel about what they are doing to this country. And I have no power, no way to handle them, but I would stand up if under proper circumstances.”

Graham apologized after the tape became public, telling a group of Jewish leaders he was on his “hands and knees” to make up for the harm of his remarks.

Rabbi A. James Rudin, the former director of interreligious affairs of the American Jewish Committee, said Graham repeated that apology in private. In a one-on-one meeting in 2005, during Graham’s last crusade in New York, the evangelist — whom Rudin had known since the 1970s — “admitted he was wrong and he also admitted that he was wrong to be involved directly in Republican politics,” Rudin said.

Rudin believes Graham was sincere in his teshuva, and that his recorded remarks and affirmations of Nixon’s anti-Semitic comments were the result of his being “awed” by being alone in the presence of the President of the United States.

The Graham he knew, Rudin said, was an individual who did a lot of good for the Jewish community, speaking out against the oppression of Soviet Jewry and producing a pro-Israel film called “His Land” for his churches. Most notably, Rudin said, Graham deflated the ambitions of Key ‘73, an Evangelical initiative to expose every individual in the United States and Canada to the Christian gospel. In a 1973 meeting with Rabbi Marc Tannenbaum, Rudin’s predecessor at the AJC, Graham disavowed attempts to target Jews for conversion, a position he soon after made public.

“I believe God has always had a special relationship with the Jewish people,” Graham wrote in a 1973 Christianity Today article. “In my evangelistic efforts, I have never felt called to single out Jews as Jews… Just as Judaism frowns on proselytizing that is coercive, or that seeks to commit men against their will, so do I.”

But whether or not Graham approved of the “coercive” conversion of Jews, his theology was exclusivist, a point of concern for Rabbi Jack Moline, the president of the Interfaith Alliance, an organization committed to preserving the boundaries between religion and government and individual religious freedom. “Reverend Graham was an eloquent and admirable advocate of his particular form of religious belief,” Moline said “Is that what we as a country want to lift up and see as the paragon of the American experience?”

Moline said that Graham had performed teshuva for his remarks about Jews, saying “I think it is not fair to judge the man’s life by a mistake he acknowledges.” He also defended North Carolina’s prerogative to choose Graham as a representative of their state. But Moline did question what values the state means to highlight by selecting him.

“If the reason that North Carolina is putting Billy Graham forward is because of his particular religious approach, then I think we’re going to be revisiting his statue at some time in the future,” said Moline. “I would say that not including Christians — who will have their own issues with Billy Graham — 100 percent of the others in this country will find him to be representing something with which they do not agree.”

Former North Carolina State Sen. Dan Soucek, who introduced the idea for the statue in 2015, told Religion News Service that Graham was a good pick for the state because , “From a Christian religious point of view, Billy Graham is an undeniable worldwide icon.”

Graham would not be the only figure in the Statuary Hall with divisive religious beliefs. The Mormon prophet Brigham Young, the nun Mother Joseph (Esther Pariseau) and missionaries like Hawaii’s Father Damien (Jozef De Veuster) — whose statue Representative Alexandria Ocasio-Cortez recently called an “example of white supremacist culture” — are currently on view. There is also no real legal church and state issue with placing Graham in this pantheon, experts say, as the funds for the statue will come from fundraising through the Billy Graham Evangelistic Association and not state funds.

“I don’t see much of a problem with the Billy Graham statue,” Perry Dane, a law professor of with an expertise in law and religion at Rutgers University, wrote in an email. “It is not a religious symbol such as a cross. It is not a religious relic or shrine. It is not a statement of religious belief or devotion, as the much-litigated Ten Commandments monuments are.”

Rather, Dane sees a statue to Graham as a monument to a person who had an undeniable impact on the history and culture of the United States.

“My only concern as a strict separationist would be if the statue included some sort of plaque or inscription that might constitute a declaration of faith,” Dane said.

Yet the statue of Graham, whom President Trump also recently named as a sculpture subject in an executive order establishing a “Garden of American Heroes,” is controversial to some seperationist hardliners. Rob Boston, senior adviser at Americans United for Separation of Church and State, commended North Carolina officials for removing Aycock, but called the Graham statue a “poor alternative.”

“We respect that many Christians revere Graham,” Boston said in a statement to the Forward. “But his legacy also includes derogatory statements about Jews, a crusade against LGBTQ equality, and a less-than-stellar record on advancing civil rights for Black Americans. North Carolina should not swap one divisive, exclusionary figure for another; two wrongs don’t make a right.”

“I don’t think we should foreclose religious figures, but it is a question,” said Rudin. “John Lewis, from Georgia — or from Alabama, where he was born — maybe someday they’ll want to put him in there. Well, he was a congressperson, but he was also an ordained Baptist Minister. Martin Luther King, of course, has his own monument in Washington. I don’t think there should be a restriction.”

“He certainly did a lot of good and he certainly did less damage than some of the missionaries that are there,” said Moline, “but is he what we want to put forward about who we are? I don’t know the answer to that question.”

Should Billy Graham — evangelist with an anti-Semitism scandal — get a statue in the Capitol?