In 2017, a Texan governmental body voted to secede from the United States.

No, it wasn’t the state’s legislature. It was a group of rebellious participants in Boys State, a summer program founded in 1935 by the American Legion that aims to inculcate the values of civil discourse in a population not known for that virtue: high school boys. Students nominated by their teachers spend a week trotting around a college campus in matching lanyards as they build a mock government by creating parties, forming platforms, and campaigning in tense elections. The ultimate prize: becoming governor of the entire makeshift polity.

The notable collapse of civil discourse in the program in 2017 became a minor scandal and caught the eyes of Jesse Moss and Amanda McBaine, husband-and-wife documentary filmmakers who developed their understated, cinéma vérité style in features like “The Overnighters,” a documentary that follows workers who flocked to North Dakota during the state’s oil boom. The next year, they attended Boys State themselves, hoping to find out, as Moss put it, whether the next generation of aspiring politicians would “come together and heal” or “fall apart into disunion.”

The product of their journey, the documentary “Boys State,” focuses on four participants in the program. René, a Black, suffer-no-fools debater rocking a pair of Chuck Schumer spectacles, rises to power despite racist tactics employed by other boys. Ben, a double amputee, emerges as a Machiavellian strategist. Strong-jawed Robert, a born glad-hander, turns out to be less of a good ol’ boy than he initially seems. And Steven, the son of undocumented Mexican immigrants and an activist with March For Our Lives, wins allies against the odds by relentlessly asking other boys, “What issues matter to you?”

“Boys State” is a portrait of an American institution that’s both deeply anachronistic and working to become more representative of Texas’s diverse, modern population. It’s a surprising meditation on teenage masculinity, capturing a group of boys who can be found screaming “Our masculinity shall not be infringed!” one moment and tenderly swaying in a dark auditorium while one of their number performs “Hallelujah” the next. And it’s a film that attempts, by searching for consensus in a fraught and polarized summer program, to examine the future of consensus in our fraught and polarized democracy.

Moss and McBaine spoke to me over the phone about returning to the world of summer camp. The following conversation has been edited and condensed for clarity.

Irene Connelly: My boyfriend and I watched “Boys State” together. We loved it, but he said it gave him a little “camp trauma.” What was it like for you to immerse yourselves in this very niche teen ecosystem?

McBaine: What you hope for in a documentary is that what you expect is not what you find. That was especially true in this scenario. We got there and there was definitely stuff to see that scared us and startled us, and cynicism on a level I thought was extreme for 17-year-olds. But in the course of the week, there was so much more that was the opposite of that. We saw listening, and compromise, and vulnerability. So being able to hold both those feelings at the same time was my takeaway.

Moss: I was deprived of a true summer camp experience. I still hold my mother accountable for that. I don’t have that camp trauma. But I am a documentary filmmaker, by nature an outsider, not a joiner. I’m not comfortable in a room full of chanting boys, I’m the guy holding the camera. What made it OK for us to enter the space is that we were already deeply connected with three of the four main characters of the film. We had already met Steven, Ben and Robert. I channelled my own anxieties through them and they all experienced the program in different ways. 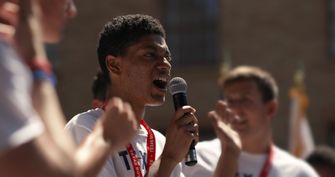 How did you choose the boys you profiled in depth, and how did you know they’d be so charismatic?

Moss: Well, we joke that we developed a proprietary algorithm that casts all our films for us. But the real answer is, a little bit of leg work.

McBaine: A lot of leg work! We spent three months whittling a hundred potential candidates down to four.

Moss: It was kind of a film unto itself to go into these living rooms and meet these teenage boys and their parents. We loved firing random questions at them, like, “Tell me what issues you’ve changed your mind on.” There was a set of hard criteria we were looking for: diversity in socioeconomic background and politics. But then there was the intangible x-factor of charisma. When a 17-year-old quotes Napoleon at you, you make a note. The day we met Steven, we had a two-hour conversation and covered so much ground. He was clearly so reflective and vulnerable but also strong. I think that’s a combination they all experience to some degree, strength and vulnerability.

McBaine: I remember when we arrived at Robert’s house. He was actually late to the interview and then he descended the staircase in his family’s amazing house, and I was like “Oh my God, there’s Matt Dillon.” I had this high school reaction to seeing him. Then he starts speaking and I’m like, “OK you’re interesting to me. Your outside-inside thing is interesting.” We couldn’t have known what his tactics were going to be, because he didn’t share that with us. [Editors note: Robert, who admits to the filmmakers that he’s pro-choice, runs for governer on a fiery anti-abortion platform, hoping it’ll help him win friends and influence people. It doesn’t.] Watching his actions and contrasting them with what he told us was really one of the great experiences we had.

I thought Robert would be a kind of villain, but that’s not how he turned out at all.

Moss: He’s so honest about his respect for Steven and owning his own miscalculations. Robert did come to “know thyself” in a short period of time in a deep way. That’s what we had been told was possible, that this crucible of a week could really transform some of these young men. We thought that was just hype — how much can someone change? But that’s what we saw with Robert. 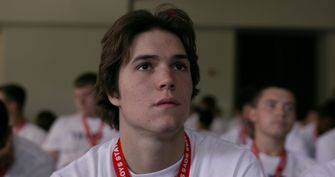 Robert, a born glad-hander who turns out to be much less of a good-old-boy than he initially seems. Image by Apple TV+

You profiled characters from a wide range of backgrounds. But in most of the speeches you film, participants recite pretty standard conservative talking points on hot-button issues like abortion and gun-control. And as René puts it, he’s never “been with so many white people. Ever.” Do you think Boys State lives up to its ideals of promoting consensus and civil discourse?

McBaine: The program has one foot in the 1950s and one foot in the future. They’re doing a lot of work to diversify. They’re not done with that work, but they’re moving in that direction to better represent the population of Texas.

Moss: And if you think about it, that’s really the project of our country too. We have a foot in the ’50s, unfortunately, and we’re uneasily moving into a more equitable shared future that acknowledges all of its citizens. The story that emerged for us was these voices, Steven’s and René’s, challenging the white conversative power structure. That’s part of the story of our moment.

With the speeches, we didn’t cherry pick. Some of the statements were so outrageous. How can you not include a guy who’s saying his masculinity “will not be infringed?” But we also had René giving a barn-burner of a speech when he ran for the party chair position.

McBaine: There’s also the fact that the talking points they’ve all heard didn’t actually generate the people in power. Those who ended up percolating to the top were thinking for themselves, although they had a crazy combination of ideas.

Throughout the film we see Steven, an incredibly sympathetic character, gaining traction among the boys. But things don’t turn out as he planned. What’s it like for you as filmmakers to see this very powerful narrative building and then watch it veer off the tracks?

Moss: I experienced some of the deepest feelings making this film that I have ever felt in my life, besides with marriage and parenthood. It’s hard to describe what it was like being with Steven on this journey, feeling the ecstasy and the agony, and struggling with the non-Hollywood ending. I love what Steven says, quoting Napoleon, that “you become strong by defying defeat.” We wrestled with that. 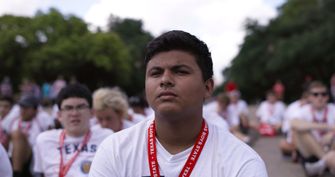 Steven, a soft-spoken teenage activist who rises to the top despite the odds. Image by Apple TV+

At the end of the film, Ben says he doesn’t regret the “shock and awe” techniques he employed against his opponents, including spreading disparaging memes on Instagram and smearing Steven for his involvement in gun control activism. What do you think Boys State attendees really learn about politics by the end?

McBaine: I can’t know what the takeaway is for all these kids, but I do know what it was for the four we followed. Ben’s journey through the program and then the film, watching his actions now as a 20-year-old, has been one of the deeper experiences for me as a filmmaker. He talks about the film as this sort of mirror that allows him to understand how he couldn’t humanize the other side at the time. He really questions the “win-at-all-costs” strategy, not only because he now knows Steven and René, but also because of where we are with this country. He recognizes that with our democracy so fragile, that kind of behavior can’t happen in electoral politics.

Ben, the Machiavelli of “Boys State.” Image by Apple TV+

How much contact have you had with the boys since filming?

Moss: We were in contact with them throughout the [filming and editing] process. This conversation Amanda is talking about has really been part of the life of the movie, because they’re not actors. They’re people, and their lives keep going. When we shared the rough cut with them, Ben actually gave us two pages of detailed notes — better notes than I get from executives at certain unnamed networks. And we shared the stage with them at Sundance. Steven’s mom was there and she got a standing ovation; everyone was in tears. With COVID, we aren’t able to physically travel but we’ve done screenings and conversations with all four boys, just to step back and let them speak about the experience and reflect on our national politics.

McBaine: Their dialogue too is extraordinary, as different as they are. At Sundance, we would have three-hour dinners where René and Ben would get into a conversation about something, historical or present-tense. They’re so evenly matched that, watching the dialogue, I would get out my phone to keep filming.