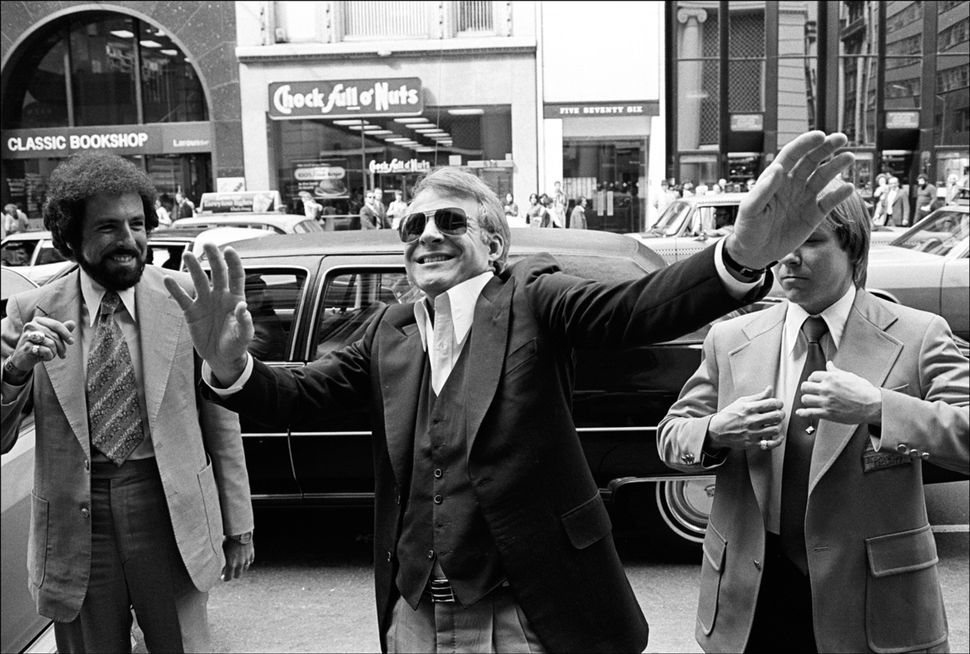 Toward the end of the 1983 comedy “The Man with Two Brains,” Steve Martin, as Dr. Michael Hfuhruhurr, is blasted with a drumfire of ethnic slurs.

Learning that his sadistic wife, Dolores (Kathleen Turner), withheld the news of his grandmother’s death, he reaches his breaking point and fights with her for the first time. During the screaming match, Dolores calls him, in a single breath, a string of epithets referring to Black people, Jews and Italians before he heaves her into a mud puddle. It’s a ridiculous moment, even for a film about a neurosurgeon who falls in love with a disembodied brain, because none of those epithets apply to Martin or his character. That’s what makes the joke work, and what makes Martin — who co-wrote the film with director Carl Reiner and George Gipe — such a unique voice.

When Martin, who turns 75 on August 14, hit the comedy scene in the late 1960s as a writer on “The Smothers Brothers Comedy Hour,” the atmosphere of TV comedy had acquired a fresh whiff of the old establishment. To speak more plainly: After years of domination by the likes of the Jewish, Bronx-born Sid Caesar and his cadre of coreligionist writers, the marquee names were WASPs. Acts like the Smotherses gained traction; on the East Coast, Johnny Carson drew eyes as the host of “The Late Show,” often booking Martin as a guest.

Yet as his career progressed, Martin, prematurely gray and Wonder-Bread-handsome, would find unprecedented inroads with TV’s old Jewish guard, who had by then mostly flocked to film. His talent for ironic, earnest and borderline anti-comedic comedy offered something fresh to the old Borscht Belt-derived formula of the Chosen people. Martin, in a three-piece suit and bunny ears, was a Christian who wasn’t the least bit ethnic, but also didn’t play the straight man. His persona was of a fearless — yet harmless — lunatic shielded from self-awareness by dint of his background’s exalted place in America.

In the mid-1970s, Martin would prance around as an albino King Tut on Lorne Michaels’ newly-minted “S.N.L.” between stints as one half of the Festrunk Brothers’ “Wild and Crazy Guys.” After he put out a couple of hit comedy records and the odd novelty single, Carl Reiner — seeing Martin as a combination of Dick Van Dyke’s profile and Mel Brooks’ mania — gave him his first star turn in a feature film, directing a script from Martin that could only succeed with someone like Martin in the lead.

“The Jerk” (1979) has a premise that would raise eyebrows today. Navin R. Johnson (Martin), was “born a poor Black child” to a sharecropping family. On his birthday — we don’t know which, but it’s too late in life for what comes next — he digs into his favorite meal of TaB, tuna fish salad on white bread with mayonnaise and two Twinkies in the presence of his loving Black family. After an emotional exchange of gifts, Navin, who is, of course, white, learns that he was adopted. It shakes him to his core.

Navin leaves home to find himself, an effort that turns out to not be a huge cultural journey, as Twinkies and mayo are positioned as the full extent of white culture. While he’s working at a gas station, a crazed gunman, who picks his name from the phone book as his next “random victim bastard” starts shooting at Navin as he minds the pumps. Somehow, the madman appears to know Navin’s origins, calling him a “half-breed” before firing in his direction — one of the most bizarre instances of a hate crime in the history of film. Navin, never suspecting he’s being targeted (remember, he’s white) believes the shooter is trying to take out a row of oil cans.

“He hates these cans!” Navin screams in a show of white obliviousness while he runs through the filling station.

It goes without saying that this joke would not be nearly as funny if played by, say, Mel Brooks or Gene Wilder. It takes someone whose presence is not just tolerated, but accepted as foundational to America — a WASPy-looking dude who was actually Baptist — for the sequence to click. A white, presumably Christian guy hunting another white Christian guy while calling him “milkface” is patently bonkers.

The scene might scan as somewhat offensive, or just a classic gag in a movie full of them. But it was emblematic of the clarity with which Martin, who wrote “The Jerk” with Carl Gottlieb and Michael Elias, understood his place in American culture — and what he had to offer to comedy. With his clean-cut establishment image, he burst on the scene doing awkward kiddy magic with the haughty presentation of a master who deserves applause. His mission, as a man whose pedigree was considered the default, was deconstructing that identity’s comfort and surety by adopting a persona that seemed like it was always failing upward.

In Navin R. Johnson, he did that by creating a naif who glides with outstanding ease from fortune to failure and, ultimately, fortune once more. As the brash grifter Freddy Benson in “Dirty Rotten Scoundrels” (1988) he played a boorish American abroad humbled by a British mentor who degrades his unfounded confidence by making him play a series of demeaning parts. Playing scamming film producer Bobby Bowfinger in “Bowfinger” (1999), he skewered a particular kind of Hollywood wannabe of the Ed Wood variety — a kind that succeeds by blind optimism, empty promises and a deluded belief in their so-called “vision.” In each, he bumbles, playing up his character’s lack of understanding of his own absurdity and entitlement.

In the ‘90s, following Nancy Meyers and Charles Shyers’ epiphany that he would be the perfect man for the titular role in “Father of the Bride,” Martin started writing plays. His best-known effort, “Picasso at the Lapin Agile,” was an imagined meeting of the minds between Albert Einstein and Pablo Picasso in the early 20th century. (A less-famous one-act, “WASP,” a florid evisceration of the repressed domestic life of America’s erstwhile ruling class, brought Martin’s derision for the mundane and the monocultural full circle.)

Through it all, Martin knew where he came from. Even as his career led to more commercial fare — the “Cheaper by the Dozen” franchise or the “Pink Panther” reboot — his genius for self-understanding never waned. Recently, he’s cultivated his reputation as a polymath who does a little bit of everything, from bluegrass albums to Tony-nominated musicals. Our acceptance of all his roles, from the bonkers to the banal, speaks to the message he’s been communicating all along: Any idiot can do whatever they want — so long as he’s the right kind of idiot. Luckily for us, unlike his characters, Martin’s the smart kind.