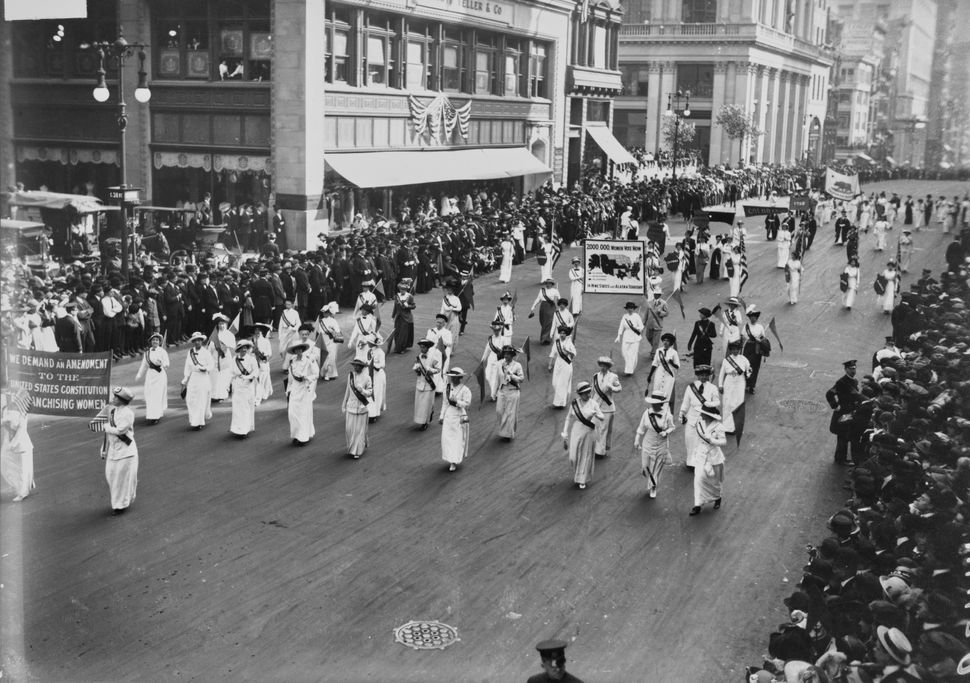 Suffragettes of the Congressional Union for Woman Suffrage marching during a parade in New York City, US, circa 1913. Image by FPG/Getty Images

On August 8, 1920, a freshman legislator from Tennessee, Joseph Hanover, was summoned to the elegant Hermitage Hotel in Nashville by Carrie Chapman Catt, head of the National American Woman Suffrage Association.

A friend and longtime ally of Susan B. Anthony, Catt had been pushing for women’s suffrage since the 1880s, and had assumed leadership of NAWSA after Anthony’s death. Now she was anointing Hanover to lead the fight for ratification of the 19th Amendment on the floor of the Tennessee House of Representatives, the final showdown in a seven-decade-plus struggle. 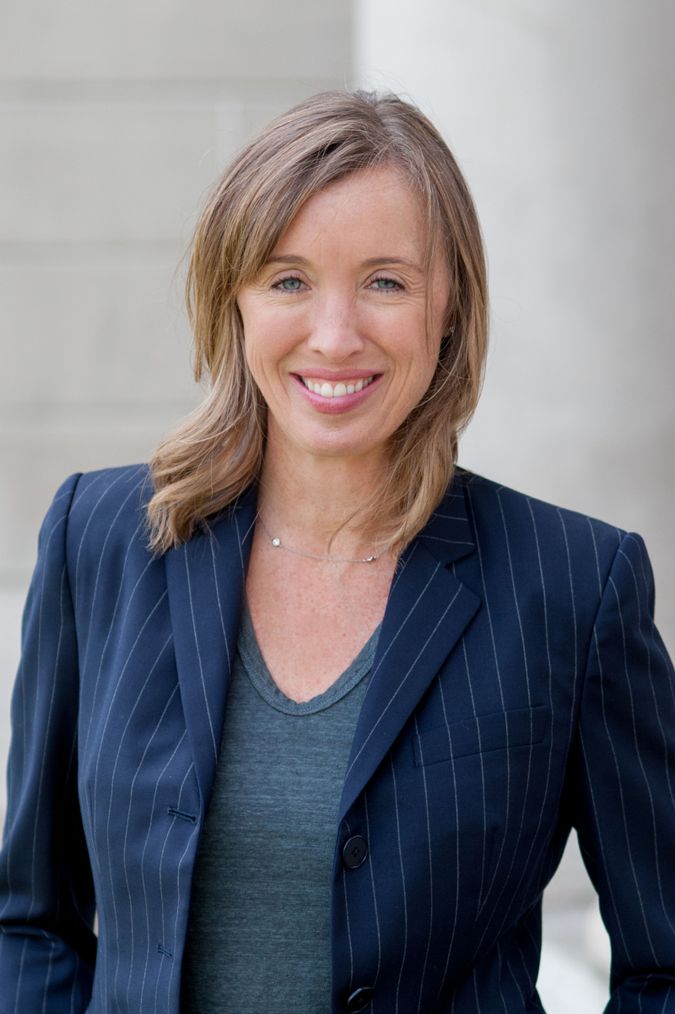 30 years old, a lawyer, natty dresser, lover of horses and the Missouri River, Hanover was in one way the perfect specimen of Southern manhood. But far from holding any Confederate pedigree, Hanover was a Jewish immigrant who understood better than most the shining promise of American democracy, for everyone. And though he’d been in the Tennessee House for less than two years, as an Independent who’d been invaluable to men on both sides of the aisle, he was uniquely positioned for this particular showdown.

Hanover had fled Russian pogroms as a child, crossing a frozen lake in eastern Poland with his mother, Esther, and two older brothers to reach a ship that would reunite them with Wolfe Hanover, their husband and father, who’d left for America two years before, after the family lost everything to the czar.

Eventually, the Hanovers settled in Memphis, where Wolfe sold wares by peddler’s cart before opening W.C. Hanover & Sons, a dry goods shop in nearby Binghampton. Joe Hanover left school after eighth grade to work at the shop and in his older brother’s business, Benjamin’s Saloon. But by 1911 he was taking night classes at Southern Law School. By 1914 he’d passed the state bar, and by 1918 he won a seat in the Tennessee House of Representatives. Two years later, the potential votes of 17 million American women relied on his steady leadership and will.

Hanover’s immigrant family revered the freedoms of the United States. After his parents passed their citizenship tests, they made their sons study the Declaration of Independence and the U.S. Constitution at home. Hanover remembered finding it strange that while the Constitution promised equal rights, Jim Crow laws blocked Black Americans from equality. And his mother did not enjoy equal rights, either. “Why can’t mother vote?” he’d demanded as a child. The answers never made sense. So as an adult, when it looked like Esther and other American women had a shot at that vote — at last — he wanted to fight for it. He left his job as Memphis city attorney to safeguard his place in the legislature, specifically to work for ratification of the 19th amendment. Epithets followed — among them “Kike” and “Bolshevik” — along with threats, and a brief assault in a hotel elevator. The governor assigned him a bodyguard.

But progress was on the march. After decades of attempts, the so-called Susan B. Anthony Amendment had finally passed both houses of the United States congress on June 4, 1919. An amendment to the Constitution requires ratification by a three-fourths majority of states, and in 1920 America had 48 states — Alaska and Hawaii were still territories — which meant 36 of them needed to vote to ratify if any amendment was to become part of the U.S. Constitution. That would mean a lot of men in favor of giving women power. And yet things went pretty smoothly — early on. By the summer of 1920, 35 states had voted yes; eight had voted the amendment down. This meant ratification required just one more “yes” state. From that point on the battle grew complicated, in the way political power struggles always are, but suffice to say: it came down to Tennessee.

By mid-July 1920 pro- and anti- ratification forces, known colloquially as Suffs and Antis, had descended on Nashville, where the lobbying, grandstanding, bribery and dirty tricks came thick and fast. Surprisingly, ratification passed the Tennessee Senate by a margin of 25 to 4 on Friday, August 13. But rhetoric on the floor was ugly, questioning the virtue of suffragists and spouting racist conspiracies, along with personal attacks on Catt. Whatever. As she wrote hopefully, “We are one half of one state away from victory.”

Ratification now went to the House, where Suffs and Antis were neck-and-neck. Two nights before the vote, House Speaker Seth Walker — the Anti hero of the House — crowed to reporters, “We’ve got ‘em whipped to a frazzle. We have ratification beaten, that is all there is to it.”

On Wednesday, August 18, Joe Hanover watched Walker cross the House floor, glad-handing farmers-turned-legislators from every corner of the state. Hanover was thumbing through his list of promised pro-ratification voters, doing a slow, careful count. His own persuasive technique was very different from Walker’s. That weekend when a longtime ally told him, “Sorry, Joe, but I’m going to have to leave you suffrage boys. The Antis just paid me three hundred dollars,” Hanover hadn’t flinched. “Well, you’re a pretty cheap vote,” he’d said, “I hear they’re paying the others a thousand.” Enraged, the man switched his vote back and said this time he wouldn’t budge.

Bribes were among the easiest Anti tactics to counter. Harder was keeping Hanover’s men out of the Jack Daniel’s room at the Hermitage hotel, where Anti whiskey flowed like water despite Prohibition. Tougher still were phone calls from soft-voiced ladies late at night, claiming to be Suffs and inviting men to their rooms, where photographers waited to capture compromising shots. It was ridiculous, but it worked. When Hanover came to the end of his list, there weren’t enough votes.

What happened next is the stuff of legend, with enough political machinations to give Machievelli pause. While Hanover coolly held pro-ratification legislators in line without bribery or blackmail, Tennessee governor Albert Roberts strong-armed the red-headed farmer Banks Turner into reluctantly turning Suff. It was good progress, but only good enough for a tie, meaning total defeat of the ratification amendment.

But that morning, Febb Ensminger Burn, mother of 22-year-old representative Harry Burn, had sent her son a seven-page letter that kicked off, “Hurrah and vote for suffrage and don’t keep them in doubt.” On the spot, Burn switched his vote from Anti to Suff.

Jubilation and outrage followed. While Suffs celebrated, Anti forces cooked up witnesses claiming to have seen Hanover roughing up Burn in a House antechamber, while offering Burn a bribe of $10,000 to switch his vote. Fortunately, the stenographer brought in to take down the sworn affidavits was a Suff. She recorded everything, including the part where witnesses were making it up, and then turned it over to the press.

The day after the vote, Harry Burn spoke on the floor of the House, saying, “I knew that a mother’s advice is always safest for a boy to follow, and my mother wanted me to vote for ratification.” Harry Burn had changed his vote, while Joe Hanover had held the line that made it possible. Good sons, looking out for their mothers.

Bridget Quinn is the author of “She Votes: How U.S. Women Won Suffrage, and What Happened Next”