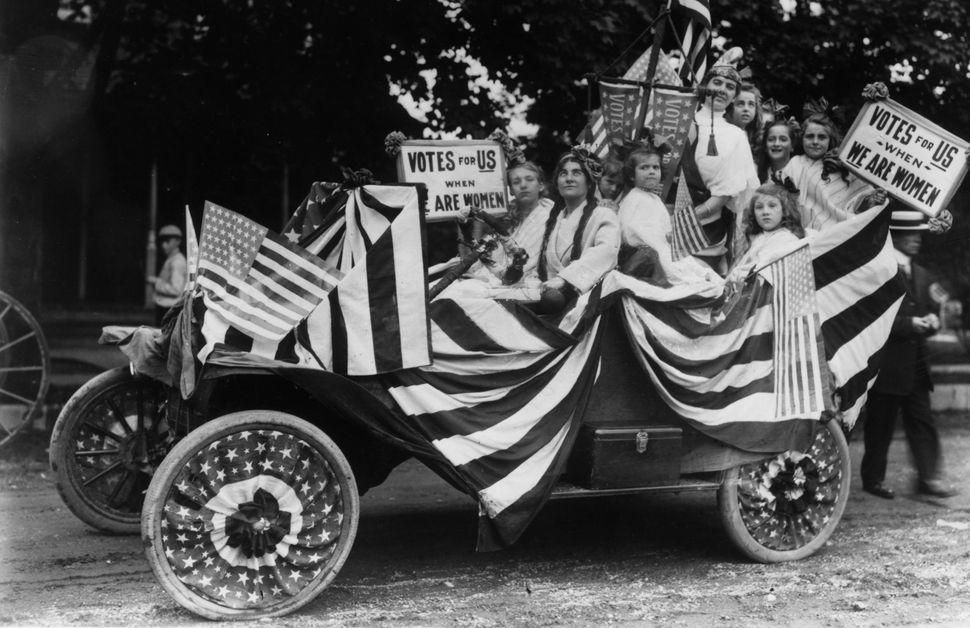 This year, leading up to the centenary of the ratification of the 19th Amendment, newspapers, podcasts, documentaries and museum exhibitions — indeed, three in the nation’s capital alone — have been filled with stories of the brave women who, for three-quarters of a century, fought for the vote. But Jewish women rarely appear in these narratives. Here are the stories of two.

By the early 1880s, Nina Morais’s reputation as a writer had spread far beyond her Philadelphia Jewish community. A quarter of a century later, the charity worker Sofia Monte Neuberger Loebinger clambered up a ladder to exhort a New York crowd of men to give women the vote. 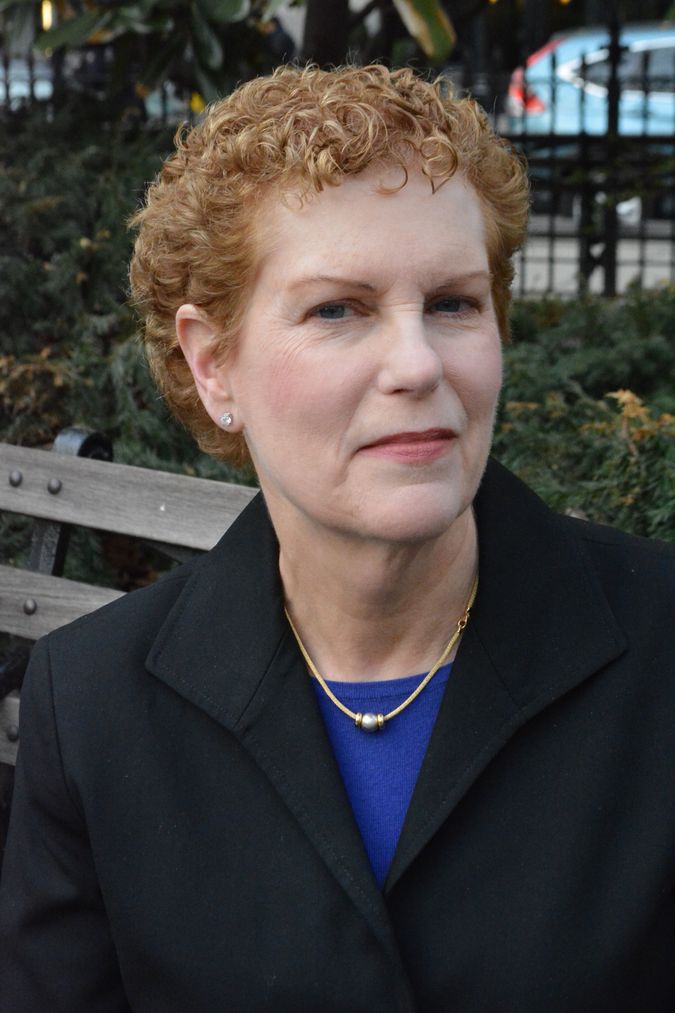 Pamela Nadell, author of “America’s Jewish Women: A History from Colonial Times to Today.” Image by Courtesy of Pamela Nadell

Morais came to the attention of a wider public in 1881, when she was 25, in the pages of the well-respected North American Review. By that time, Morais, the eldest daughter of a rabbi, had spent much of her life running her father’s household and raising her six siblings. (The youngest was just two at the time of her mother’s death a decade before.) It’s unknown whether Morais joined either of the competing national woman’s suffrage associations — back then the singular “woman” stood for all women — when she took up woman’s rights. But she gave an early inkling of her thinking in a prize-winning essay written in 1877 for the Young Men’s Hebrew Association, in which she claimed: “[I]f we educate our will-power as the medium by which we can master circumstance, then we can rise.”

Her dispatch for the North American Review was prompted by fury at the outrageous claim, published six months before in its pages by a female student of philosophy, that her sex’s smaller brains limited their intelligence, correspondingly restricting their world to children and the home. Writing in objection, Morais burst out as a champion for women’s rights. She proved that science did not equate brain size with intellect. Women’s inadequate educations and their “household Tyrannus [who] has riveted closer chains than the political one,” she argued, had impeded their advancement. But the “revolution” she awaited, although “tardy,” was finally underway. It would bring “equality, intellectual and moral” to the sexes.

Two years later, again in the North American Review, she denounced those who called the demand for woman’s suffrage “an hysterical outburst.” Recounting the already long history of women’s fight for the vote, she reminded her readers that “women who pay both direct and indirect taxes are entitled to the same civil rights and privileges that the men of the Revolution demanded from the stubborn king.”

But Morais’s interest in social justice wasn’t restricted to women’s rights. After making a splash in her rebuttal of the philosophy student, she next published in the North American Review an exposé of Americans’ prejudice against Jews. In less than a dozen hard-hitting pages, she revealed the spate of educational, social, institutional and even legal discriminations Jews like her — well-to-do, educated, responsible citizens — faced in the United States. Taunted as Christ-killers in schoolrooms, turned away from hotels, blackballed by clubs and mocked in garish cartoons in the press, she documented “Jewish Ostracism in America.” She even quoted a teacher telling her best pupil: “I am sorry for you… it is your misfortune, not your fault, that you are a Jew.” Had she once heard these words, and never forgot them?

When she married, she changed her byline to Nina Morais Cohen and relocated to Minneapolis. Her reputation as a suffragist had preceded her. When the National American Woman Suffrage Association met in the City of Lakes in 1901, Honorary President Susan B. Anthony stayed at her house. By then, Morais Cohen was also the founding president of the Minneapolis branch of the National Council of Jewish Women.

Morais Cohen died on February 28, 1918. She did not live to see Minnesota grant women the vote in presidential elections in 1919, then ratify the 19th Amendment later that year. At her death, the Minnesota Woman Suffrage Association and the National Council of Jewish Women praised the “moral and intellectual power” of this woman who had, in her lifetime, championed her sex and her people.

A quarter of a century later, atop that ladder planted in a sea of men, Sofia Monte Neuberger Loebinger wore the banner of a suffragette, not a suffragist.

What was the difference? The suffragette movement arose in England in the early 1900s when a newspaper ridiculed militant suffragists with the diminutive “ette.” Unexpectedly, the women proudly adopted the label. As Loebinger — an American who had studied British suffragettes’ methods during a visit to the U.K. — explained, suffragists hosted tea parties: They cajoled, pleaded and persuaded, waiting with “feminine patience for the coming of the millennium.” Suffragettes were militant, unafraid to be called “unwomanly.” They headed out into the streets to compel men to give them the vote. Hoodlums, throwing ink pots and bananas, jeered at them. But they persisted, certain that rousing public opinion was the key to success.

As a young wife in the 1890s, before becoming a suffragette, Loebinger lived a life of privilege in a brownstone bordering a Harlem park, when that neighborhood was home to affluent Jewish families. She honed her organizational chops as president of the eponymous Monte Relief Society. Its members, well-to-do Jewish women, distributed food and clothing to the city’s poor. The Society’s fundraising capers portended Loebinger’s antics as a suffragette. At one of its affairs in 1894, the women shockingly took to the stage in tights and short skirts.

When, in 1907, Loebinger became a founding member of the National Progressive Woman Suffrage Union and editor of its paper, she became a suffragette. Headquartered in New York, the association campaigned for women’s suffrage and equal rights. Many members — although not Loebinger — were working women, immigrants speaking Yiddish and German. Its tactics — like the open-air meetings that found her perched atop a ladder — were decidedly unladylike.

At such meetings, Loebinger waded into the crowds, shaking a tambourine festooned with yellow ribbons, the suffragettes’ color. As an organ grinder cranked a hurdy-gurdy, she passed the tambourine collecting money for her cause. During an election in 1908, she disguised herself as a waitress working in a bakery serving as a polling place. Then she had a Board of Elections inspector arrested for illegally voting there, since he didn’t live in that district. (He later sued her for damages.) At a meeting of the group’s Harlem branch, where she was president, she got the members to agree not to marry any man who did not support their cause.

The National Progressive Woman Suffrage Union was the first modern American suffrage organization to adopt these tactics. Although historians credit the turn to militancy to the Equality League of Self-Supporting Women, headed by Harriet Stanton Blatch, Loebinger and the Progressive Woman Suffrage Union were first on the scene. And suffrage led Loebinger to other civic causes. During World War I, as patriotic suffragists around the country stepped up to protect the home front and to prove that they deserved the vote, Captain Sophia Loebinger joined the Women’s Police Reserve Force. By then the State of New York had granted women suffrage, a measure the state implemented in 1917, and she began casting her own ballots.

When Loebinger died on March 7, 1943, she was remembered as a suffragist, not a suffragette. The story of her unladylike activism was lost until a grandniece, Ann Goldsmith Miller, uncovered documents revealing her true history.

Whose story gets told? The many stories told this year, leading up to the centennial of the 19th Amendment, have largely glossed over suffragists’ religious and ethnic diversity, with the exception of exposing the real and disturbing racism Black women faced not only from their allies in the suffrage struggle, but also from those opposed to it, who raised the spectre of overturning Jim Crow by giving African-American women the vote.

But the movement was, in fact, a diverse one. Now, it’s time to fully restore memories of the broad range of women who put themselves on the line in support of the cause. Neither Nina Morais Cohen, Sofia Loebinger, nor the National Progressive Woman’s Suffrage Union, with its many Jewish members, appeared in the “History of Woman Suffrage,” written by movement leaders Elizabeth Cady Stanton and Susan B. Anthony. Jewish women rarely appeared in the hundreds of pages of its three volumes. In telling the long history of the struggle for female suffrage, other such differences and contributions are pushed aside. Nevertheless, American Jews were in the fight. These are just two stories of American women who championed women’s rights and did so proudly as Jews.

Pamela S. Nadell is the author of “America’s Jewish Women: A History from Colonial Times to Today,” which won the 2019 National Jewish Book Award Book of the Year