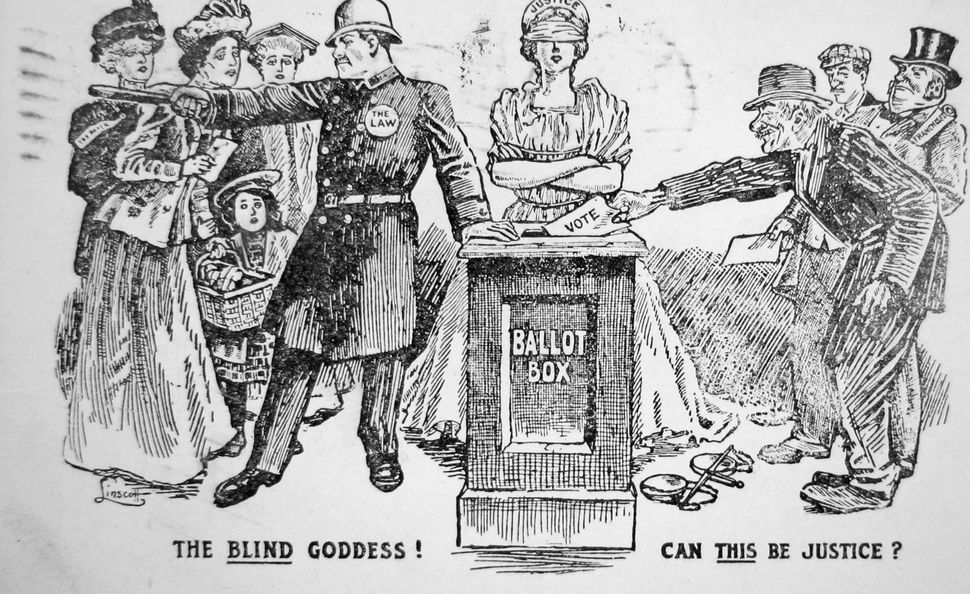 A card depicts disreputable men voting while a law officer keeps women away from a ballot box that is supervised by a blindfolded, female personification of Justice, captioned “The blind goddess! Can this be justice?” published for the American market, 1900. Image by Ken Florey Suffrage Collection/Gado/Getty Images

Women have had the right to vote in the United States for 100 years. We should celebrate that, but our understanding of what exactly this right entails remains superficial. Many think that the right to vote is in itself sufficient: If they have in fact voted, they think, they have exercised this right and fulfilled their civic duty. And if their candidate wins, well, they have won, too. 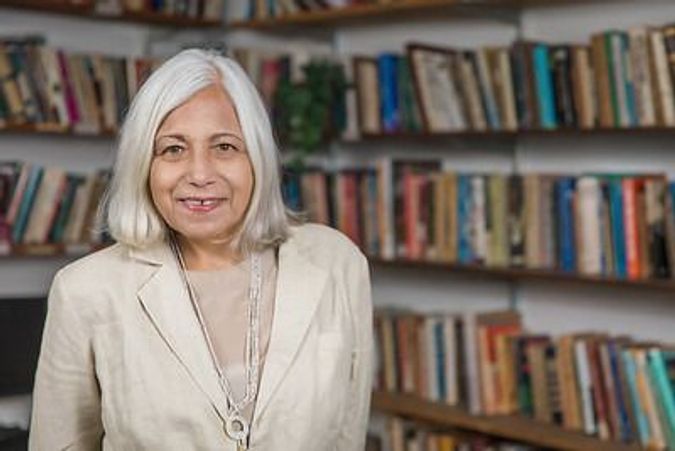 There is some truth in this, but not enough. The right to vote is a distinction of citizenship, and voting itself is an obligation that often requires effort and inconvenience. But women have yet to fully make the most of the opportunity that right presents to help create a government and society that will support our basic life needs and allow for personal fulfillment. To do so requires not only voting, but carefully examining candidates and their agendas and holding them accountable after they are elected. If the person you voted for wins, your work has just begun: You need to see if they are doing the job you and others elected them for, give them feedback, and vote them in or out next time. If the person you voted for doesn’t win, you have to track and anticipate the actions of the winner.

The Women’s March on January 21, 2017, the largest protest in U.S. history, is proof that a century after gaining the vote, there remains much more for us to do with it. Beyond being a splendid, pussy-cat hat-adorned act of mass expression, that protest set the stage for a record number of women to be elected to state and federal office during the 2018 midterm elections. Why did it take a catalyst as extreme as the election of Donald Trump to lead to that result?

No presidential administration since 1920 has wholeheartedly supported the lives of women. During the second half of the 20th century, the majority of women with school-age children entered the workforce. Most did not take that step for self-fulfillment, but because they needed to contribute to family earnings or were single mothers.

COVID-19 has kept many of them at home, with or without work, in secure or insecure households. Why has 100 years of women’s suffrage not yielded a national child care program that operates 24 hours a day, seven days a week, 365 days a year? Those legislators reluctant to fund a national childcare program or support local ones may have been ambivalent about mothers working outside the home. But now, in order to restart the economy, officials with similar ideologies want to precipitously reopen schools, exactly so that women can go back to work. When childcare was provided for the children of essential workers during the surge in New York State, not a single case of COVID-19 infection or death was reported. Now more than ever, it’s clear that formal education and childcare services are distinct, and it’s time for women to use our votes to demand that these two things be provided separately. The need for safe, accessible, regular neighborhood childcare — already taken for granted in many European cities — is a COVID-19 lesson that American women who vote can and should demand.

Joe Biden’s pick of Kamala Harris as his running mate presents women voters with another historic opportunity. Those women who vote for the Biden-Harris ticket this November, in addition to celebrating the historic first of a Black multi-racial vice presidential candidate, should treat their vote as an opportunity to demand change.

While Harris’ selection was undeniably motivated by public sentiment concerning the murder of George Floyd and the subsequent Black Lives Matter Movement, she has a prosecutorial record of protecting overly-aggressive police officers. Will woman voters hold her accountable to her commitment to police reform, and see that she follows through? Harris’s advocacy of reparations for slavery and stronger funding for COVID-19 treatment and vaccination in communities of color has already drawn backlash from conservatives. Will women voting because Harris is on the ticket — as some surely will — ask her to concretely establish how she will carry out such COVID-19-focused programs in ways that include all vulnerable populations, and specifically the poor, disabled and elderly of all races? Will they insist that the reparations for which she advocates include unfulfilled Native American treaties? Will women who vote for Biden and Harris follow through, if their ticket is elected, by tracking their administration’s implementation of campaign commitments as a condition for their re-election in 2024? Will they keep an eye on voter suppression?

At stake with these and other issues, some of which came to light during COVID-19 and others of which are perennial, is no abstract feminist doctrine, but the quality of life for real women and those they know and love. The full power of women’s right to vote has only begun to be tapped in the first 100 years. As women learn more about it in fully entering politics and civic life, there could be real changes in women’s lives, but not just that. Because women take care of so many, who are both the same and different from them, their full engagement in politics is the lever by which to raise the world.

Naomi Zack is Professor of Philosophy at Lehman College, CUNY. Her most recent book is “Reviving the Social Compact” (2018). Out this December is “Progressive Anonymity.” She is at work on The “Pandemic and the Police” (due in Spring 2021)