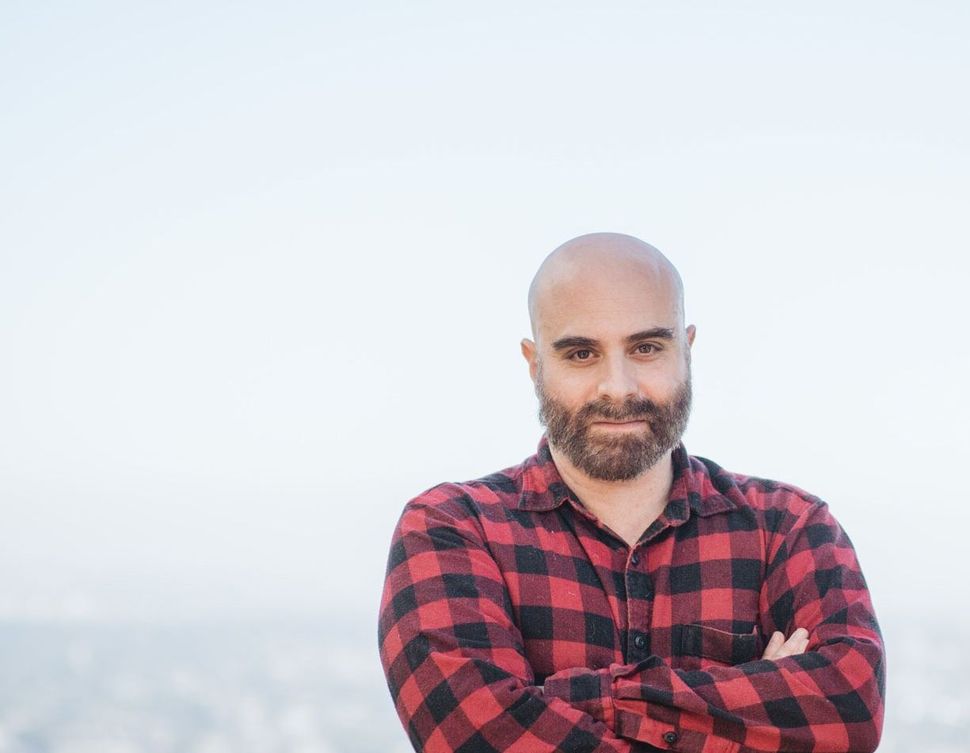 On a sweltering day in New York, and a milder one in Los Angeles, David Adjmi moved our Facetime conversation up to his terrace and showed me the view: trees and white facades melting into the greenery of the Hollywood Hills.

Adjmi, 47, like many New York playwrights, moved West to try his hand at television — with mixed success. He likes that he’s in the realm of his current play subject Arnold Schoenberg and, he tells me, Schoenberg’s favorite neighbor, Shirley Temple, and his frenemy, Thomas Mann. Like Schoenberg, Adjmi’s a transplant if not something of an expat, tracing his origins from the Syrian Jewish enclave of Midwood, Brooklyn.

In his new memoir, “Lot Six,” Adjmi paints a picture of adaptability as survival. Named for a shorthand for homosexuals that comes from the world of retail (six is the pricing code for three, i.e. “queer as a three dollar bill”), Adjmi lived in fear of being labelled a Lot Six. The Syrian Jewish — or SY — community of the late 70s and early 80s was an inhospitable place for a young gay man. Adjmi tells me he’s heard, anecdotally, that the same is true today.

He was able to muddle through by assuming different personas and affectations. He struggled at the Modern Orthodox Yeshiva he attended (unlike most kids he was there through financial aid) and ultimately transferred to a secular school in Manhattan where he tried to conquer his Brooklyn accent and got a job at a boutique clothing store by pretending to be French. In college, he dreaded up his hair and dubbed himself “Dread.” Over time, he came out as gay, but still felt the nagging need to conform to other’s expectations. At his master’s playwrighting program at Juilliard, he convinced himself to like puffy musicals to impress a chilly professor.

Adjmi had a breakthrough when he embraced a brutal honesty. His monologue “Elective Affinities,” his first work to gain widespread attention, emerged when he used a vulnerable moment of his indomitable professor – called “Gloria” in the memoir – as inspiration. Since then, his work, including a harsh critique of SY culture (“Stunning”) and a serio-comic exploration of being trapped in the closet (“3C”) has been known for its candor, intensity and eclectic use of different styles, which range from the absurd to the naturalistic. But putting his insights on the stage was not the same as telling his own story.

Structuring the memoir, a wholly different enterprise than a play, was about an “experiment with this plasticity of identity,” Adjmi, clad in a gray tank top, told me. He uses words like “plasticity” – perhaps a throwback to his time obsessed with Nietszche — with a casual ease peppered with many “likes” (his prose is fond of “rococo” adjectives like “lapidary.”) His deep-set eyes and dark, animated eyebrows sit on a sturdy head, bald and bearded. In photos the intensity of his profile is striking and often seems deadly serious. Over a video call, his anchor tattoo visible on his upper arm, he’s vivacious, smiling, hugging a pillow to his chest as we chat, his Brooklynese peeking out in the odd mention of a “cawffee table.”

This quality of duality – the charged and the frivolous — matches his plays, which oscillate in tone. They are at once erudite and steeped in pop culture.

“3C,” for instance, riffs on “Three’s Company.” (The rights holders to the sitcom shut him down; Adjmi sued and won.) Only in Adjmi’s version, the Jack Tripper analogue is actually gay — while also playacting as a gay man to stay with his female roommates. In this guise the broad comedy becomes a psychosexual nightmare.

Meanwhile, Admi’s breakout play, “Stunning,” which premiered at Washington, D.C.’s Woolly Mammoth Theatre Company in 2008, concerned a young Syrian woman who has a lesbian affair, was a succès de scandale, eviscerating the pieties of the Syrian Jewish community. Before the memoir, the play was the closest Adjmi had come to autobiography, and there were consequences.

In “Lot Six,” Adjmi describes his terror when he ran into his cousin at a performance. As the play’s 2009 run at Lincoln Center, more people from Midwood turned up and some heckled the actors by screaming the word “Dyke.” When Adjmi’s father died – sometime after remarrying and only telling one of his children about it – his sister-in-law denounced him at the shiva, calling the play “disgusting.” When “Stunning” was still new, he told the Forward that it “terrified” him for how close it was often came to his own life story.

For all the agita it caused, the play landed Adjmi a nonfiction book deal. He would once again undergo the difficult process of exploring his roots — only this time he didn’t have the smokescreen of fiction. He didn’t like it or find it easy.

“It was kind of a tortuous experience,” said Adjmi, who spent the better of a decade writing the memoir, a task that has “as much to do with playwriting as set design has to do with building a skyscraper.”

Even when Adjmi got going — writing what seemed like reams about Kafka, Edmund Husserl and Hitchcock – his editor had to guide him back to his own story of becoming. The essays about other figures, like his many adolescent alter-egos, were a dodge. Most of the names in the book are changed, even those of his family, but there was no hiding from the book’s subject: Himself.

“It’s not my favorite thing to do,” Adjmi said. “I did it because I felt that it was my charge and I felt that I had to have integrity in how I approached this the same way that I do with my plays. My plays are rigorously true even though they’re fictional. They’re true in the sense that they have to ring those bells that art has to ring.”

While writing is a throughline to Adjmi’s self-discovery, it is a late development in the book. Touchstones of his sensibility, like his childhood viewing of the original Broadway production of “Sweeney Todd,” the Lincoln Center run of “Six Degrees of Separation” and his college fascination with Rainer Werner Fassbinder’s muse Margit Carstensen, are woven throughout, each suggesting a different way to assume a new identity.

Adjmi realized that, in order to be truthful, he had to be frank about his family’s turbulent home life. But more painfully, he had to be forthcoming about his long life of dissembling to fit in. Up until now, the act continued through his career as a writer.

Adjmi says that his work is his therapy – the arena where he can best interrogate his place in the world. But he never did it with a straightforward mouthpiece, preferring a genteel old woman promoting torture (“Elective Affinities”) or the ill-starred queen of France (“Marie Antoinette”) to speak to what he abhors or values or simply finds fascinating (he says he hates message plays). But he realized toward the end of writing the memoir that his life might be interesting on its own terms – if not to him, then to someone like him.

“We don’t really have an identity banner: Like ‘Hey I’m a gay, Syrian Sephardic Jew.’ What is that? There’s nothing to fix that to,” Adjmi said. Isaac Mizrahi’s memoir from last year, “I.M.” may be the only other prominent example from this very specific identity bracket. Like Mizrahi, Adjmi left the community behind.

Adjmi had been eager to return to New York this year to open an ambitious new four-act play with music by Arcade Fire’s Will Butler (it was to be Adjmi’s Broadway debut). Now, he says, “all bets are off,” though there is a tentative premiere date of March 2021.

The playwright was at first “strangely elated” by California’s stay at home orders. He was wildly productive working on his projects, which include a novel he describes as a blend between Thomas Mann’s “The Magic Mountain” and “The 40 Year Old Virgin.” But now he’s hit a rut. He’ll go on masked walks, but is terrified someone will “blow particles” on him.

Ever resilient, and raised in dysfunction, he nonetheless sees the farce in the moment, adapting once more to adversity.

“When I go to like FedEx and I mail things and we all have our masks we all kind of laugh about it,” Adjmi said. “There’s something very my sensibility about this moment. It’s very darkly comic.”

In the memoir, Adjmi’s professor at Iowa University asked him to define “Adjmi-esque.” I asked him if this situation qualified.

“Now we’re living it,” he said with a chuckle. “Now we all know what it is. It’s not that far from Kafkaesque.”