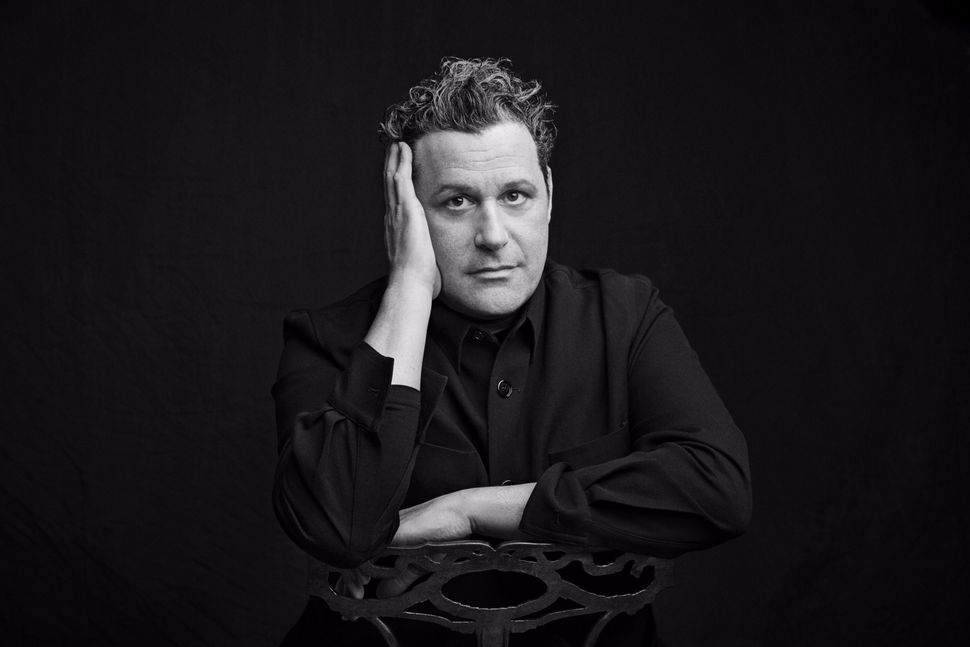 Image by Courtesy of The Jewish Museum

While I waited in the lobby of the Jewish Museum Tuesday for the press preview of “Isaac Mizrahi: An Unruly History,” I plotted how to get the designer’s autograph. The coffee table books titled “Isaac Mizrahi” by Chee Pearlman being sold in the gift shop looked expensive. There were only a few blank pages left in my notebook, and what if I needed them for our interview? I decided to forget it.

Upstairs, I walked into a meeting room and sat beside Mizrahi. He told me to hang on while he fiddled on his phone and I immediately noticed the black Sharpie on the table.

Over the course of the interview, Mizrahi and I talked about his childhood and growing up Jewish, his dislike of trendy, fussy outfits and his experience curating the exhibit.

The fifteen minutes ran out quickly and the woman keeping time cleared her throat. Because he had kept me waiting, Mizrahi asked if I wanted to squeeze in one more question. 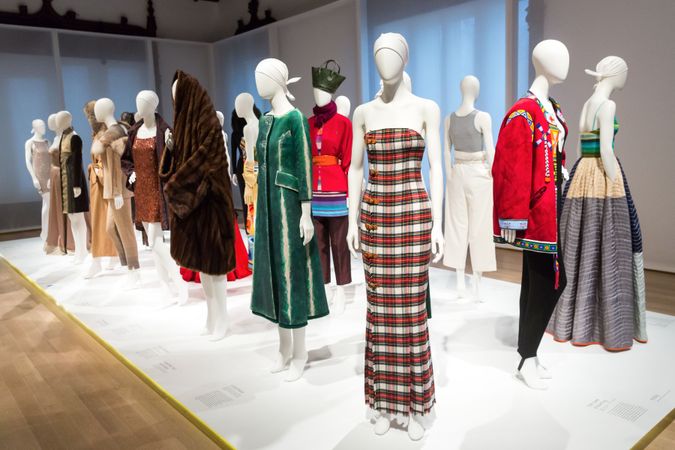 Pret-a-Porter: “Isaac Mizrahi: An Unruly History Image by Courtesy of The Jewish Museum

Mizrahi was a household name when I was growing up, which is probably unusual for most Oregonians. My mom has admired Mizrahi for years as someone who follows fashion and finds him funny and entertaining. She has rented “Unzipped” multiple times, the acclaimed and hilarious documentary about his 1994 collection. She dragged me to Target when his line debuted there in 2001. We watched his talk show “The Isaac Mizrahi Show “religiously for the two years it aired from 2001 to 2003 where he chatted with celebrities and did his daily activities. When she found out I would be interviewing him, she texted me for days with potential questions, including one about his psychic even though she had no idea whether he even has one. Turns out, he has his tarot cards read. (“Are you kidding me? I live for that stuff,” he said at the press preview of the exhibit.)

As someone who was not yet even born when Mizrahi began his fashion house in 1987, I found the clothes in the exhibit to possess a timeless quality — I wanted to rip them off the mannequins and wear them home. Mizrahi claims that is a reaction he strives towards.

During our conversation, he alternated between making animated hand gestures to sitting back pensively in his chair. He mused over his mother’s teachings and explained how she never took anything at face value. For instance, she told him to better himself instead of praising his work. She told him to be curious, skeptical and honest.

“Doubt leads to certainty,” he said. Silence ensued. “Wow, that was a big statement,” he said. “We’ll see how that sits.” 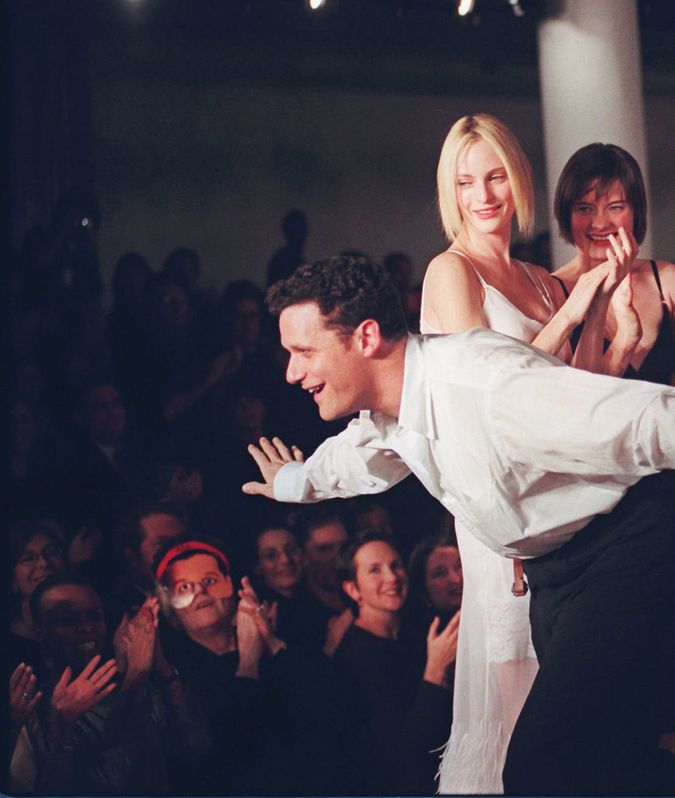 Image by Courtesy of The Jewish Museum

Mizrahi has filled out since his early years and his signature curly poof has gone gray. He’s worn the same thin, black priestly jacket for 30 years and at one point in our conversation, jiggled the flab under his chin, to show how his physique has changed but the outfit has not. He likes to poke fun of himself. It makes him relatable and humane, especially for a designer hailed by such fashion mavens as Sarah Jessica Parker and Natalie Portman. During the press talk earlier in the day, catered by Russ & Daughters, he interrupted Lynn Yaeger, his interviewer, to say, “If I don’t get one of those black and white cookies, I’m going to kill someone.”

“Unruly” seems like a good adjective to describe both him and the show, but at the same time it doesn’t encompass the paradox of his collections — equally daring yet everyday, high-fashion yet attainable, wild but subtly tame.

Not surprisingly, color plays a big role in the exhibit, particularly in his 1994 collection where a tangerine taffeta gown is paired with a white baby tee to show how glamour and grunge can go as one. Other techniques stand out though aside from the use of color — a wool dress embroidered to emulate a totem pole, a mini shift made from Coca-Cola pailettes, and a Star of David belt buckle on a bodysuit with an Ostrich fur hood.

“If crosses are everywhere, why not make the Star of David ubiquitous too? Just another thing?” he has said on numerous occasions.

Mizrahi insisted the museum curators strip the second floor gallery of the black fabric normally hung on its walls in favor of a scrim to let in natural light and also mimic the approach he famously used to showcase his fall 1994 collection, documented in “Unzipped,” in which he swaps the runway’s backdrop for a sheer screen, giving the audience a glimpse into the hustle and chaos backstage.

The second room features two walls arrayed floor-to-ceiling with his sketches: brightly clad stick figures striking poses and modeling plaid gowns and red trench coats. He says he has kept every drawing he’s made since he was eight. As in any exhibit that showcases early sketches, such as the Tim Burton show at MoMA in 2009, we receive an invitation to understand an artist’s private life and inner musings — the thick brush strokes and furious scribbles give way to ideas scrapped and genius yet to come. It’s the most intimate part of the show.

From early on, Mizrahi defied the conscripts of a normal life. He was born in Brooklyn and grew up as an only son to Jewish parents, Sarah and Zeke Mizrahi, who manufactured children’s clothing. He was captivated by fashion at a young age. Some of his first sketches were scribbled in prayer books at Yeshiva of Flatbush, a modern Orthodox private school.

“It is a kind of persecution that is unpleasant to think about,” he said about being both Jewish and gay. He spoke about bullying, which he saw as a problem that afflicts mankind as a whole. “People kill themselves who are bullied,” he said.

Mizrahi doesn’t consider himself religious and left behind the community, though he maintains a close relationship with his mother.

The designer’s appeal and awe-factor are not limited to his runway collections; Mizrahi has worked in the fashion, film, theater, dance and television industries, and the exhibit dedicates a small section to the costumes he designed for the operas “Platee” and “The Magic Flute.”

Now he’s writing a memoir due out in 2017. The book, and the exhibit, required combing through archives and revisiting memories. Of the experience, he quoted Diana Vreeland: “I loathe nostalgia.”

“At first it was a big bore,” he said. “But then it became fascinating because of what you’re leaving out,” meaning what pieces didn’t make the cut for this exhibit. One such item included a black jumpsuit with a high waist, which he failed to locate after calling everyone who might have it.

When the meeting ended and I watched Mizrahi scrawl my mother’s name with a heart underneath, I was reminded of the timelessness and universality not just of his clothes, but also of him. He is widely considered a New York designer, but regular women across America, like my mom, look up to him.

“I think historically,” he said. “I think of tomorrow as 150 years from now.”