Itzhak Perlman at 75: Celebrating a life in music and Yiddishkeit 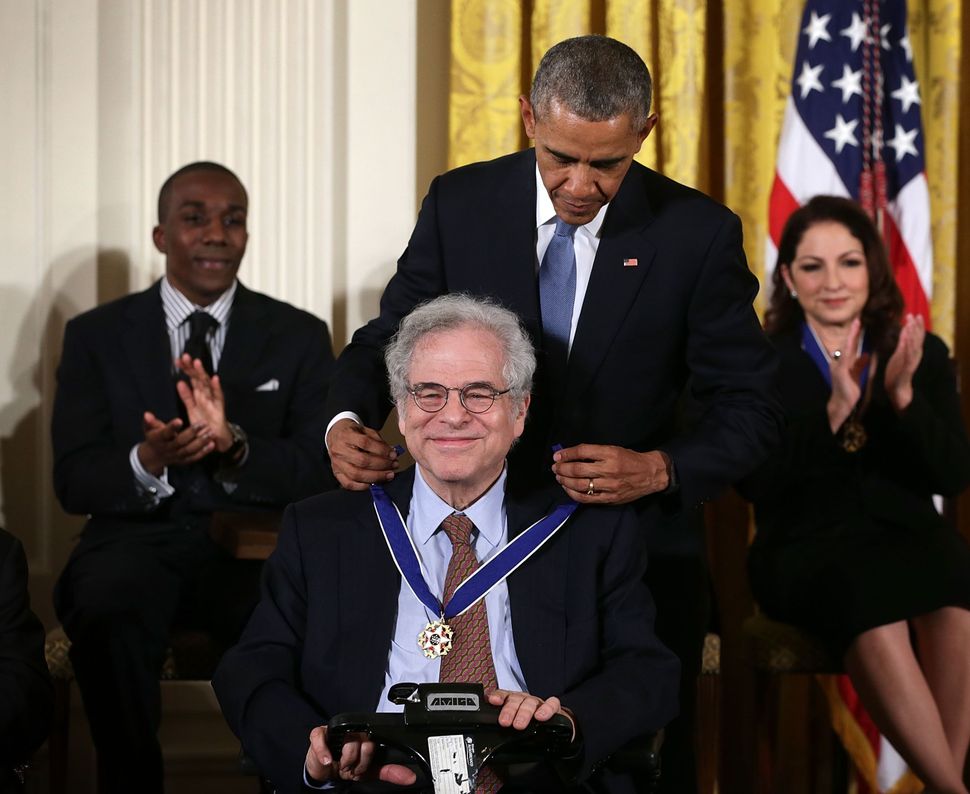 On August 31, Itzhak Perlman turns 75, and a new 18-CD set tribute from SONY, complements a 77-disc set from Warner Classics issued for his 70th birthday. It is time to take stock of the Tel Aviv-born violinist’s storied career.

Possibly overfamiliar to audiences from his TV chat show appearances and in crossover Hollywoodiana, Perlman has been reticent in other ways. No Perlman biography or memoir has been published, apart from “Itzhak: A Boy Who Loved the Violin,” from Abrams, for readers aged four to eight.

Perlman’s discography is so abundant that just his renditions of Jewish composers give a full sense of his artistry. One of his finest moments on record is in Mario Castelnuovo-Tedesco’s Violin Concerto No 2, op 66 “The Prophets.” Castelnuovo-Tedesco (1895–1968) was an Italian Jewish composer who fled Fascist persecution with the assistance of Arturo Toscanini and Jascha Heifetz, to whom subsequent works were dedicated.

Castelnuovo-Tedesco’s brainy “Prophets” concerto consists of mulling over the emotional significance of passages from Isaiah, Jeremiah and Elijah. Unlike his contemporary Erich Wolfgang Korngold, Castelnuovo-Tedesco had an esthetic sense that did not dissolve into kitschy goo during years spent writing film scores in California.

Heifetz’s matchless recording has the astringency of desertic utterances. This may be partly due to the fact that he did not get around to recording it until 1954, over 20 years after he premiered it, and not with its original conductor, Toscanini. While not surpassing his great predecessor, Perlman, who has never claimed to outdo Heifetz, adds his characteristic sweet tone and sunny personality, casting a welcome personable light on the composition.

This is particularly precious in a concerto written explicitly as a response to anti-Semitic persecution, already rising in the early 1930s in Europe, to which Castelnuovo-Tedesco countered this evocation of the “splendor of days past.”

Just as Castelnuovo-Tedesco’s presence on the American scene during the dark years of World War II and afterward proved an inspirational resource – he taught such budding American Jewish screen composers as Jerry Goldsmith, Marty Paich, Herman Stein and André Previn – so Perlman’s lengthy career has served as a constant reminder of the mighty tradition of Jewish string playing.

Today, when star fiddlers are no longer Jewish in the majority, Perlman’s former adherence to Isaac Stern’s so-called Kosher Nostra, a group of landsmen, reminds us of his loyalties.

Like Stern, another ebullient, extroverted public personality capable of more complex emotions offstage, Perlman offered chaste, muted renditions when the music called for them. He did so for the US composer Lukas Foss’s “Three American Pieces” (1944) and the introspective concerto by Robert Starer, of Austrian Jewish origin.

Another such example was the “Sephardic Lullaby” by the Israeli composer Paul Ben-Haim (1897-1984). This understated, intimate melody is an arrangement from 1939 of the Ladino folksong Mama no yo tengo visto (Mother, I haven’t seen). Ben-Haim was inspired by his work with Bracha Zfira, a Yemenite singer, and this direct link to vocalism echoes the attainments of supreme violinists, including Perlman, through much of the repertory.

Like Castelnuovo-Tedesco, Ben-Haim possessed some modernist asperity, making Perlman’s characteristically dulcet tones all the more welcome. Born Paul Frankenburger in Munich, Ben-Haim escaped to British Mandate Palestine in 1933. Among his list of works composed in Perlman’s hometown of Tel Aviv is a Violin Concerto – written for Zvi Zeitlin in 1960 — starting as an expression of good-natured urban bustle, with slight truculence in its gently modernist vein. Here again, Perlman is an entirely plausible protagonist.

Historically, Perlman’s performance may be overshadowed by the stunning Old Testament authenticity of the violinist Leonid Kogan, of Ukrainian Jewish origin, but it does not deviate from its focus on Yiddishkeit. Bloch, claimed that creating overtly Jewish-themed compositions was the “only way in which I can produce music of vitality and significance,” and Perlman’s artistry is inescapably a Jewish approach to music-making, even beyond historic associations between Jews and fiddles.

Still, Perlman’s rapport with Mendelssohn’s “Violin Concerto in E,” one of the peaks of Jewish composition for the instrument, was problematic. Perlman was so well-suited to perform it, with his tonal sweetness and digital relaxation, that he was invited to program it ad nauseam, until he called a halt for several years. Eventually, Perlman rediscovered the work with mastery that might be foretold from a surviving film of himself at age 13 performing the concerto’s finale with assurance and aplomb.

Sometimes Perlman’s recorded proficiency outshone perfunctory conducting, as in the concerto by Karl Goldmark, a Viennese composer of Hungarian Jewish roots. Perlman’s grace in this recording makes one wish that he had been backed by orchestral ardor and authority, as the German Jewish maestro Bruno Walter (born Schlesinger) provided for the Ukrainian Jewish-born soloist Nathan Milstein in a 1942 performance with the New York Philharmonic.

Perhaps inevitably, a star musician of Perlman’s accomplishments is tempted to the crossover pop repertory, where schmaltz can extend past the point of self-indulgence. Teetering on the brink of this peril is the popular concerto by Erich Wolfgang Korngold, who wrote the work for Jascha Heifetz. The stern Apollonian purity of Heifetz rescued the work from Munchkinland. Perlman’s charming, mellifluous recording is, as always, ingratiating, but less bloated and pretentious in essence are miniatures by the Austrian Jewish violinist and composer Fritz Kreisler. Perlman gives admirably straightforward versions of these, if naturally not displacing the composer’s own early recordings.

Dialing down extravagant charm in the Isaac Stern style, Perlman achieves some of his most imperishable Yiddishkeit in these performances. In all this varied repertory where he was most himself, Perlman’s statements were fundamentally opposed to his occasional brief, unhappy attempts to adopt other musical roles and guises.

Perlman’s repeated attempts to conduct have generally not been superlative, despite being recorded and released with fanfare. The same is true of his incongruous 1980 appearance in a recorded scene from Puccini’s “Tosca,” singing the bit part of the jailer. Doubtless his friends and colleagues on the record, conductor James Levine and tenor Placido Domingo, thought it would be a good idea.

While musicians sometimes go off the beaten track in thrice-familiar repertory just to avoid boredom, Perlman’s mere presence, rather than his resonant baritone, makes an odd impression in what should be a tragic moment redolent of torture and death for the imprisoned operatic character Mario. “Tosca” has no room for a superficial celebrity in-joke. To his credit, Perlman’s rare frivolous misstep proved to be the antithesis of his sustained achievement over more than a half-century.

Itzhak Perlman at 75: Celebrating a life in music and Yiddishkeit