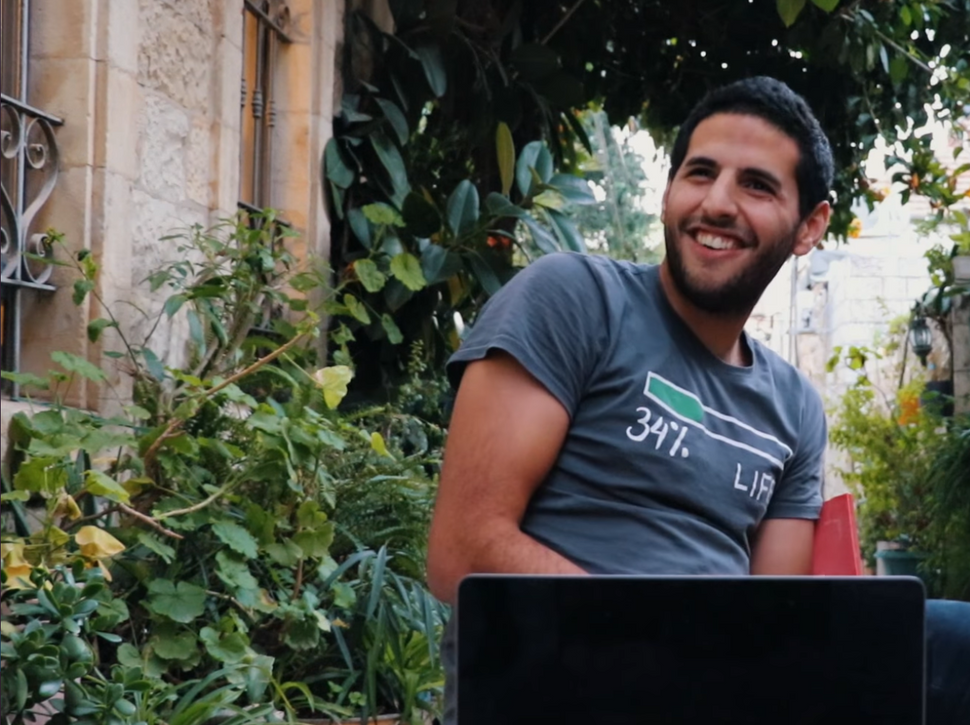 Nas Daily in a video titled “The truth about Jews and Arabs.” Image by Screenshot from Facebook

Nas Daily is the handle of 28-year-old Nuseir Yassin, whose Facebook page, featuring cheery one-minute travelogues, has over 17 million followers. His videos from around the world are treasured for their spirit of global community. But Yassin is especially beloved in Israel, where effusive, star-struck fans stop him constantly in the street. His videos are not political, and are designed to “infuse one minute of tolerance every day.” In one of his few posts about his native Israel, he concluded that “The majority of Jews and Arabs actually want to get along.” The message of peaceful coexistence resonated for many Israeli Jews; the video has over 58 million views.

But not everyone is willing to hear that message. BDS is now accusing Yassin of “normalizing relations with Israel” to “cover up its crimes” through his “The Next Nas Daily” program. The new program, working through the “Nas Academy,” is recruiting 80 Arab content creators for a six-month paid mentorship to develop their skills through video posts. BDS called on those currently participating in the program to withdraw.

In a statement on its website, posted in Arabic and translated by Google, BDS writes that the Nas Academy will include Israelis in the supervising and training staff for Arab students and notes that the enterprise is funded by the New Media Academy, an Emirati company formed in June, shortly before the UAE normalized relations with Israel.

Yassin, whom BDS says is “steeped in normalization” is accused of broadcasting material that “wrestles Israel from its true context and its nature based on criminality and ethnic cleansing” and that tries to portray the Palestinian-Israeli conflict as a struggle “between two parties of equal force, deliberately ignoring the rights of the Palestinian people, especially the right of return.”

Yassin and his light daily videos have attracted controversy in the past. Arab outlets have accused him of “obscuring the aggressor-victim relationship” and of oversimplifying the history of Israel and Palestine.

But Yassin often talks about his frustrations with Israel, and with the struggles of being an Arab living there.

“Arab Israelis don’t have the same voice as Jewish Israelis,” Yassin told Tablet in 2019. “If you look at the numbers, we are not equal. There are many reasons for this, some have to do with the fact that we are a bit primitive in the way we do certain things, others have to do with the government not giving us the same opportunities as Jews.”

Yassin admits that he never had Jewish Israeli friends until he lived in the U.S. while attending Harvard. His view of Israel is not airbrushed or overly rosy, but realistic and pragmatic.

“If you say the ‘I’ word in your videos, Israel, you’re automatically a normalizer, an Israeli Zionist, because you admit the country exists, which it does.” Yassin told Tablet of his critics in the Arab world, arguing that acknowledging the state does not mean endorsing its every policy. In fact, he tries to give a balanced account of his own lived experience in the country as an Arab-Israeli with a platform, aware that there aren’t many who fit the criteria.

“Every time I praise Israel, which is rarely, I make sure to counter it with a negative,” said Yassin. “I want to make sure I don’t become an Israel propagandist.”