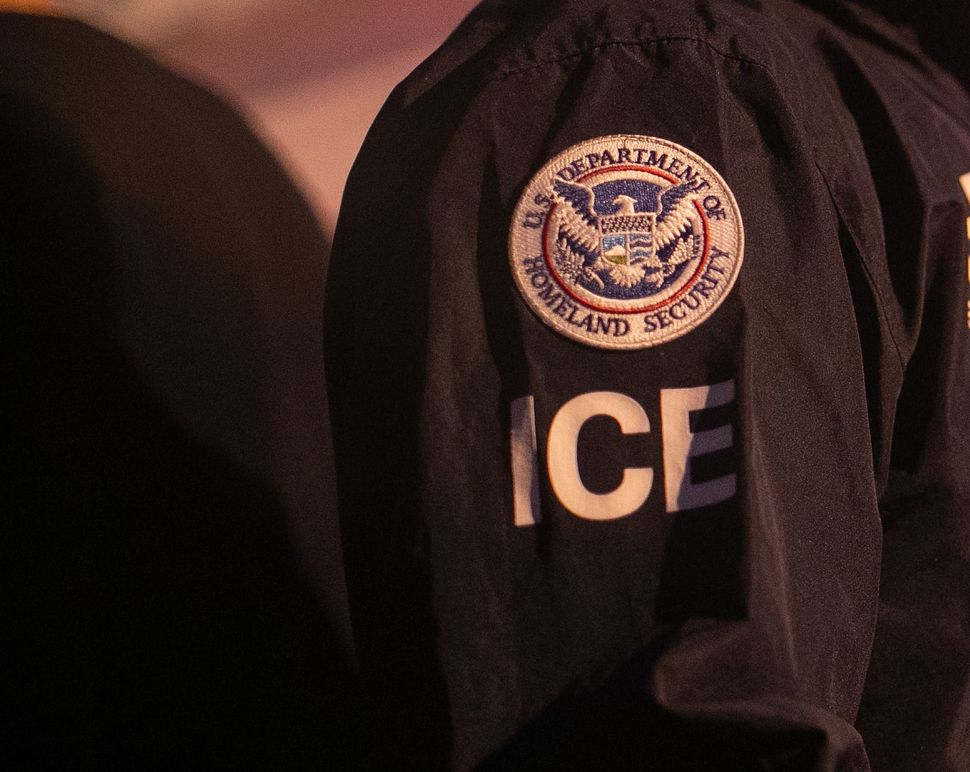 An agent with Immigration and Customs Enforcement. Image by John Moore/Getty Images

Dawn Wooten, a nurse who rocketed into national attention after filing a whistleblower report alleging that immigrant women detained by ICE at a private facility were being subjected to forced hysterectomies, looked straight at the camera.

“I had several detained women on numerous occasions that would come to me and say, ‘Ms. Wooten, I had a hysterectomy,’” Wooten, who formerly worked at Georgia’s Irwin County Detention Center, told MSNBC’s Chris Hayes. She said that the women, many of whom had been sent to a single doctor, since identified as Mahendra Amin, would ask her why they’d received the procedure, in which a woman’s uterus is removed, sometimes along with her ovaries and Fallopian tubes.

While not yet substantiated, Wooten’s report, filed alongside claims by four lawyers representing women detained at the center, made headlines across the country. (A lawyer for Amin told The New York Times that Amin denies all accusations.) After news of the allegations broke on Monday, “Mengele” — a reference to the Nazi doctor Josef Mengele, who conducted brutal experiments on concentration camp inmates — briefly trended on Twitter. But, while the Nazis made eugenics-based interventions, including a program of mass forced sterilization, infamous, their inspiration came from the United States, which spent much of the 20th century deploying the practice against groups including Black people, Native Americans, Mexican Americans and people with disabilities.

Where do the allegations against the Irwin County Detention Center and Amin fit in that history? Here’s the context you need.

In the 20th century, 32 states legalized compulsory sterilization, laws that resulted in approximately 65,000 American men and women being involuntarily stripped of their ability to have children, mostly while institutionalized in mental hospitals.

The laws were a distinctly American invention: Indiana’s 1907 legalization of the practice established the world’s first program for compulsory sterilizations conducted under the auspices of a government. In the 1927 case Buck vs. Bell, the Supreme Court determined that forced sterilization was constitutional. In the decision, which still stands today, chief justice Oliver Wendell Holmes famously declared that “three generations of imbeciles are enough.”

What prompted state governments’ enthusiasm for forcibly ensuring that certain of their citizens could never reproduce? After Charles Darwin introduced the idea of natural selection, an evolutionary process by which traits less conducive to a species’ survival were posited to naturally disappear over time, his theories became both a focal point for scientific investigation and the source of a number of pseudoscientific offshoots. Foremost among those was eugenics. Emerging in the late 1800s, the field revolved around the belief that humans might speed the process of natural selection by systematically excising supposedly undesirable characteristics from the population — which meant, practically, ensuring that those seen to carry such characteristics could not reproduce.

While eugenics quickly gained popularity across the globe, it took particular hold in the United States. Its popularity was closely tied to fears, on the part of white leaders, of losing racial power; president Theodore Roosevelt, an early proponent of eugenics, publicly advised that if white families didn’t have more children, they risked “race suicide.” Those fears helped win the eugenics movement the support, at the tail end of the gilded age, of foundations established by some of that era’s wealthiest families — the Rockefellers, the Carnegies, the Harrimans — even as one of the most prominent eugenics organizations, the American Eugenics Society, advocated for eventually sterilizing a full 10th of American citizens. And those fears structured the movement’s outcomes. While people of a wide variety of racial, ethnic and economic backgrounds were subjected to forced sterilization, most victims were poor and Black.

The American fervor for forced sterilization won attention overseas. In “Mein Kampf,” published in 1925, Adolf Hitler praised American eugenics programs. He knew of one country in the world, he wrote, that was making progress toward the kind of racially homogenous model of citizenship he envisioned. “Of course, it is not our model German Republic,” he wrote, “but the United States.”

“The demand that defective people be prevented from propagating equally defective offspring is a demand of clearest reason and, if systematically executed, represents the most humane act of mankind,” he wrote to Madison Grant, author of “The Passing of the Great Race” and a celebrity among the 1920s American intelligentsia. (F. Scott Fitzgerald nodded to his work with some approbation in “The Great Gatsby.”)

But the relationship between the German and American eugenics movement extended back into the 1920s, around the time of the publication of “Mein Kampf.” Early in that decade, the Rockefeller Foundation began to fund a series of programs in the field of German eugenics “research;” among its grantees was the program that employed Mengele before he became the notorious so-called “Angel of Death.” Its support for German eugenics continued even after Hitler seized power in 1933.

Soon after that event, Hitler and members of his government began official communications with those who led the American eugenics movements. They kept particularly close ties with officials in California, which was responsible for the most widespread use of forced sterilization in the United States; current estimates suggest that the state accounted for close to a third of all American forced sterilizations. The California eugenicist CM Goethe traveled to Germany in 1934, and returned full of praise for the ways in which the Third Reich proposed to make good on and extend California’s eugenics-based efforts. “Everywhere I sensed that their opinions have been tremendously stimulated by American thought,” he wrote. His letter was so welcome that the Human Betterment Foundation, a San Diego-based eugenics institute, included it in their 1935 annual report.

The outcome of that tremendous stimulation was the forced sterilization of approximately 400,000 Germans in the 1930s. Men were most frequently subjected to vasectomies, and women to tubal ligations — colloquially, their tubes were tied — that often cost them their lives. That number does not include the substantial number of concentration camp inmates who were forcibly sterilized in the 1940s, which is unknown but, according to the United States Holocaust Memorial Museum, understood to be in the thousands.

What was the international reaction? For some, growing discomfort. In the United States, newspapers expressed fear that the Germans would employ forced sterilization as a political tool, deploying it against Jews and other perceived political foes. At the same time, the medical community began to view the practice with increasing skepticism. When the breadth of the German program became well-known internationally, public unease with forced sterilization increased.

But the damage was done. As Goethe wrote, the work of the American eugenics community had “jolted into action a great government of 60 million people” — with fatal consequences.

In 1936, after the world began to see the Nazis’ program of mass forced sterilization as emblematic of their broader brutality, the United States’ scientific community joined the United Kingdom in disavowing the practice.

But the U.S. not only continued allow forced sterilization, but covertly endorsed it in select cases as government policy.

California, the state whose sterilization program had directly inspired the Nazis, continued to forcibly sterilize people committed to state institutions into the early 1950s, often targeting Mexican immigrants and Mexican-Americans, who were described as “immigrants of an undesirable type.” The state only outlawed forced sterilization in 1979.

In 1976, the federal government admitted to having undertaken a program of mass forced sterilization on Native American reservations. A study that year found that in the three preceding years, 3,406 Native American women had been victims of the program.

A 2013 investigation by Reveal, a project of the Center for Investigative Reporting, found that at least 148 women inmates with the California Department of Corrections and Rehabilitation had been subjected to involuntary tubal ligations while giving birth. While the operations were against prison rules and performed by doctors who did not seek the required state approval to conduct them, sources inside the prison system reported that prison staff routinely employed coercive tactics to pressure inmates — particularly those they saw as likely to experience repeat imprisonment — to agree to undergo sterilization procedures.

Now, Congress and the Department of Homeland Security are pursuing investigations into the Irwin County Detention Center.

“When I met all these women who had had surgeries, I thought this was like an experimental concentration camp,” Wooten said in her whistleblower report, “It was like they’re experimenting on our bodies.”