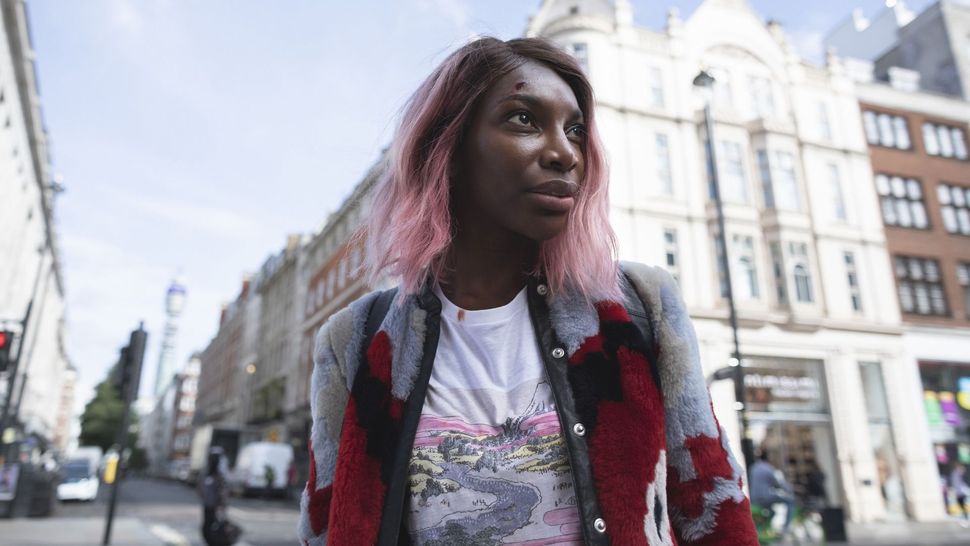 I May Destroy You Image by HBO

For the Days of Awe that began in Elul and continue through Yom Kippur, there is no show more appropriate to watch than the BBC/HBO sensation, Michaela Coel’s “I May Destroy You.” What series more thoroughly asks for a cheshbon nefesh – the accounting of the soul? In truth, it might be the bravest TV show I’ve ever seen. The show tackles sexual assault, racism, mental health issues and numerous forms of cruelty.

At the heart of the series are reckonings with rape and assault in various forms — date rape, stealthing, and other non-consensual sex acts, against women and men. The insights into narcissistic, desensitizing behaviors, from Molly consumption to social media addiction to empty sex also cut deep. Throughout, very quietly, we are faced with things we almost never see on TV, the small, everyday features of an average woman’s life: sitting on the toilet (in “Broad City,” perhaps, anywhere else?), pulling out a bloody tampon, squishing a warm blood clot that has just been ejected from a menstruating vagina.

As for Coel herself, I dare you not to be dazzled by this young writer/director/star, who is a genius in both body and soul. The writing is layered and nuanced, and just when you are going to hate a character (or WHITE MEN) forever, you don’t. Or you aren’t sure if you do. Maybe they just need love. Then again, maybe you’ll give them that love, and they’ll be dicks again. Maybe when you offer them your heart, they’ll hold a gun to it. Or maybe they’ll turn it all around, redeem themselves, give you faith in friendship, intimacy, trust, people. At least for now. For this time of repentance. For this time of reflection. And forgiveness. For the Days of Awe. After Yom Kippur, we begin again with our sins, and with our grudges.

Every morning during the month of Elul, we listened to the music of the shofar, our Jewish alarm clock. We heard it on the second day of Rosh Hashanah, and we will hear it a last time at the conclusion of Yom Kippur. The shofar is a call to action. It stirs us out of complacency, the humdrum of daily life where we move from activity to activity without introspection.

The soundtrack of Coel’s series is its shofar. In The New York Times, Reggie Ugwu has written about the show’s “vibrant, mostly modern mix of hip-hop, electronic music, R&B and jazz, much of it made by members of the African diaspora,” saying it “provides an appealing and useful foothold into the characters’ social and psychological universe.” Ugwu interviewed Ciara Elwis, the music supervisor, about the choices that she and Coel made to score the show. “It was really important for all the characters to have songs representing them, including in the lyrics, and for that [to] add to your understanding of who they are,” Elwis said.

So what does it mean when the music from the Machzor, the Jewish High Holiday prayer book, finds its way into the series in pivotal moments for Coel’s character, Arabella?

No, Arabella is not a converso. But let’s look at the moments in the series that give rise to the music of Cantor Gideon Zelermyer and the Shaar Hashomayim choir. The first time — there are two — is when Arabella is “stealthed.”

Here’s what happens: Early in the series, Arabella meets Zain, an innocuous-looking writing partner who is sent by Arabella’s publisher to help with her writing process, which she has been struggling with, not in small part because she is recovering from being “spiked” (drugged) and sexually assaulted, a traumatic evening she only remembers in fragments. There is chemistry between Arabella and Zain, and when they go to bed together, their act is entirely consensual — until it isn’t. Arabella explicitly asks Zain to get a condom. He does. We see him preparing the condom in his hands, and then the camera shifts from his face to Arabella’s, both sets of eyes seeming to fix on the condom as it is presumably rolled onto his penis. I note this detail because it proves significant.

When Zain is inside Arabella, her enjoyment level appears to be at … oh, about a 6, maybe even a 5. Of course, she has recently been raped, so we’re not really holding her lack of enthusiasm against him…exactly. But then comes the moment where we have plenty to hold against Zain. He flips Arabella over, and with Arabella facing away from him, he pulls off his condom. He doesn’t ask if it’s ok with her, and he knows, as we know, she has asked him to wear a condom, and has watched him put it on. At no point did Arabella say, “You know what, mate? You can just take that bothersome thing off.”

Later, Zain confesses—and gaslights her in the process. “I thought you knew. Ummm …. couldn’t you feel it?” he asks. Arabella might be temporarily fooled by Zain’s apparent innocence, his sharing of responsibility, his attribution of bad behavior to blind passion, but it soon becomes clear that Coel is using this story to teach viewers that there are a number of ways that sexual violations can be committed. When Arabella’s eyes are opened, she bides her time, and then she outs her perpetrator in a public forum. “Zain Tareen is a rapist,” she declares at a well-attended book reading. “He is a rapist. Not ‘rape-adjacent’ or ‘a bit rapey.’ He’s a rapist, under UK law.” Zain pushes his way out of the building as everyone watches and/or records him on their phones.

We then flash to another storyline, that of Arabella’s friend Kwame, who has also been sexually assaulted, only to face another form of degradation: The police are utterly unsympathetic and unwilling to help him in any way. The police act as though a man who chooses to go on Grindr should be prepared to face the consequences. As we shift from that scene to the triumphant picture of Arabella, whose victory manifests as a social media storm, the camera pans the London night sky, and the music of Ein Kitzvah, performed by Zelermyer and the Shaar Hashomayim choir, rises through the brightly lit buildings: “Ve’ata hu melech el chai vekayum. Ein kitzvah leshnotecha, ein kitzvah leshnotecha….” (But you are the King, the living and enduring God. There is no end to your years.) It’s from Unetanneh Tokef, which is recited immediately before the kedusha prayer of Musaf on Rosh Hashanah and Yom Kippur.

Ein Kitzvah might be fleeting, but it’s hard to miss the second time the liturgy of the High Holy Days resounds in the series: Uvchein Yitkadash (Your name will be sanctified). It is loud and it is extended. And it is during perhaps the most dramatic moment of the entire series, a scene that can read as a suicide, a baptism, or … a mikveh. When Arabella hits rock bottom – the man she thought would be her salvation aimed a gun at her – she goes to the beach, once the scene of pleasure and carefree days, and walks into the ocean. As the camera zooms back from our heroine, a smaller and smaller figure in a growing sea of blue, the music rises to a pitch. On the final note of the song, Arabella sinks beneath the surface of the water.

It’s hard to say exactly why these two tracks, sung both mournfully and exultantly, fit so perfectly in these moments of “I May Destroy You.” But they do. Because in these scenes, as elsewhere, “I May Destroy You” is about both/and, about being wicked and being righteous, being inscribed in the Book of Death and being inscribed in the Book of Life. “God watches over all those who love Him, and will destroy the wicked,” we read in the Machzor. “And He, the Merciful One, atones iniquity, and does not destroy,” we read, as well. I may destroy you. And I may not. The show is about justice—and mercy. Kwame gets no justice, and Arabella does. That’s how it seems at first. But, as Ein Kitzvah reminds us, there is no end to our years, no limit to the days of your life. So much can change—and does. Arabella enters Zain’s name into the (digital) Book of Death (or Twitter, as the cool kids call it). For a while, this inscription is meaningful. Yet, Zain never dies. On the contrary, he is emblematic of all the #metoo perpetrators who suffer almost no penalty by being called out. He doubles down on his damage, and in so doing, magnifies his success, responding to the claim that he has hurt a Black woman by reinventing himself… as a Black woman. How much do you hate him now?

And yet… He’s not all bad. He comes back. He helps Arabella. And Kwame finds his way, too, moving on from his assault to find a meaningful relationship. This, after all, is the message of our Machzor, the liturgy of our days of repentance: that it is not the Lord’s desire that the wicked person shall die but rather that she or he (but usually he) shall turn back from his ways and live.