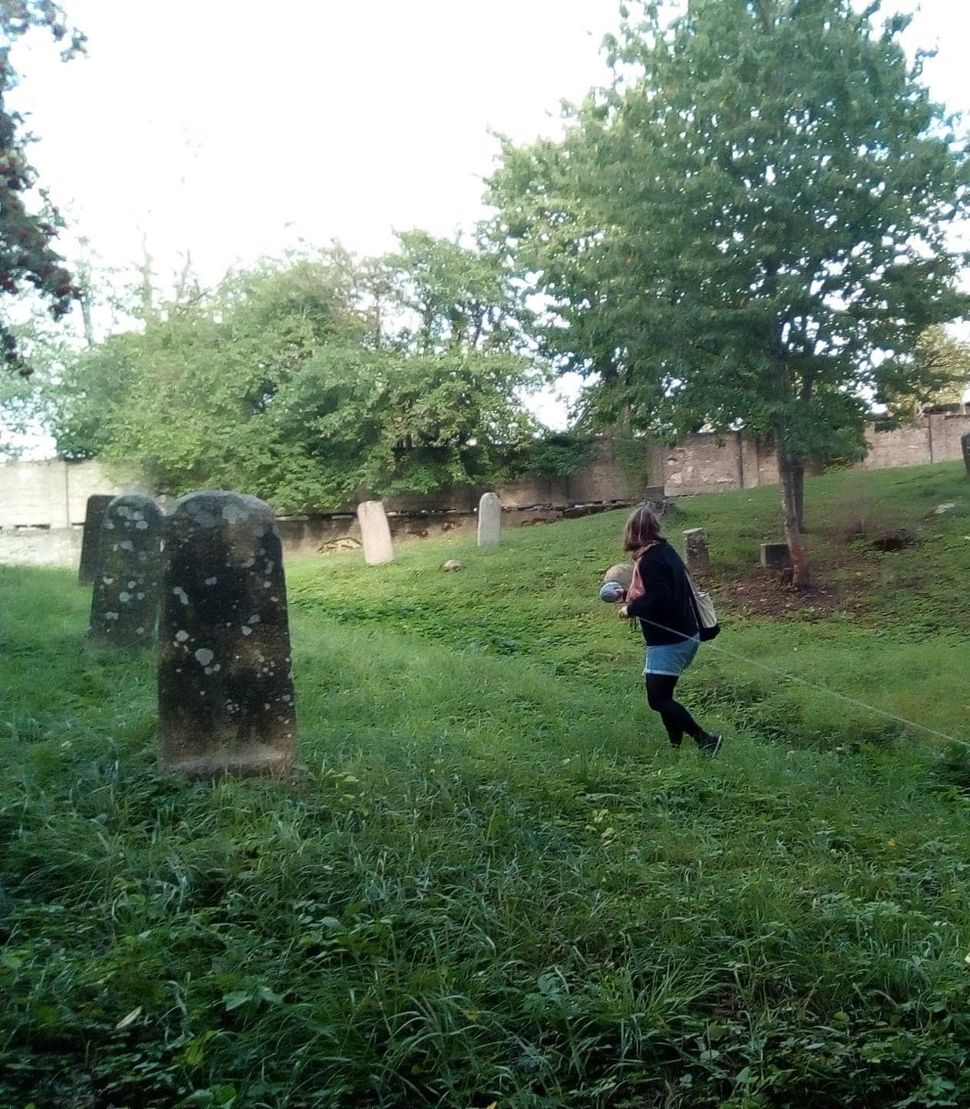 In 2018, having always felt something lacking in a religion dominated by the writings of men, I started training with the Kohenet Hebrew Priestess Institute, a spiritual leadership program centered in feminine, earth-based approaches to Judaism.

As a historical researcher, I’m always trying to find the stories that haven’t been told or written down, and one of the main things that attracted me to the Kohenet program was the opportunity to rediscover and reclaim the forgotten roles of women in Jewish practice from various times and eras.

Around the same time that I joined Kohenet I also moved to Paris to study Yiddish intensively at the Paris Yiddish Center. I had first started learning Yiddish to help me with my research, but quickly fell in love with the language and the culture and became determined not just to study the Yiddish world, but, as much as possible, to live in it. I began to notice references in Yiddish stories and memoirs to some of the female practices I had learned about through Kohenet, as well as others – traditions that, despite growing up in a progressive, feminist and mainly Ashkenazi Jewish community, I had never heard of. In an attempt to bring some of these women’s traditions back into Jewish life, or at least into communal knowledge, I started translating these Yiddish sources into English on a blog to share with others in the Kohenet community.

One of the most frequently referenced of these customs is the centuries-old women’s ritual of cemetery and grave measuring, which I first learned about on a Kohenet retreat week. A detailed description of the custom was published in a 1906 German journal of Jewish folklore. The author, anthropologist S. Weissenberg, explained that these “rare customs” were still being practiced in southern Russia, particularly in the month of Elul, when measurements would take place every Monday and Thursday, or daily after the start of the Selichot – the reciting of penitential poems leading up to the High Holidays. During this time, there were always some older women in the cemetery “who know how to measure and who carry the necessary cotton thread wrapped in balls with them,” Weissenberg explained.

Following the measuring, the threads would be used as candlewick to make special “soul candles” – a ritual known as “wick laying” – which were then donated to the synagogue for the holidays. From the tkhines (yiddish prayers) said when making the candles, it seems that measuring the burial places of the more recent deceased was a way of connecting the living to the ancestral chain all the way back to the matriarchs and patriarchs. This chain was invoked in the women’s prayers, to ask the dead to support the living in their petitions to God, and to remind God of his mercy and love for the Jewish people.

From Eastern European Jewish sources, I learned that the female elders described by Weissenberg were known in Yiddish as “feldmesterins” – cemetery measurers. They were not only experienced in the custom of measuring, but they were often paid to do this, usually on behalf of other women. In Yiddish stories, this job is sometimes found listed among other female professions, often those related to magic or so-called “superstitions.”

For example, Ayzik Meyer Dik, a Yiddish writer during the second half of the nineteenth century, writes in his story “Reb Shmaye Eliter, the Gut-Yontef greeter” about the income of Reb Eliter’s wife: “She secured her husband his teaching position, helped brides in the mikveh, carried away leftovers from the bedside of a new mother, brought women’s questions to the rabbi, measured the cemetery, made candles for Yom Kippur … poured wax and also lead [both methods of telling the future] and of course other womanly things…”

Examples of grave measurers are also found in 20th century Yiddish literature. I was particularly enthralled by Steyse and Gnesye, the two grave measurers in Soviet-Yiddish writer Moyshe Kulbak’s 1926 novel Monday, whose magical ritual amid the chaos and hardship of the Russian Revolution, ‘spins, and weaves, and envelopes the whole town in a dead thread.’

In October 2019 I travelled to Poland and Lithuania to visit the places from where my own family originate. I was especially excited to see the Lithuanian town Kretinga, which I’d read about in memoirs written by my great-great uncle. But when I got there I couldn’t find a trace of the Jewish life he’d described. In fact, the first thing I saw driving into the town was a sign pointing to the woods reading “Jewish genocide point.” The only structure remaining of the forgotten Jewish community was a run-down cemetery, now with a monument remembering the Jewish women who had been shot there during the war, among them probably some of my own family members.

Not knowing what to do, I thought of Stesye and Gnesye and their dead thread. I went to the supermarket – now standing where the mikveh used to be – bought a ball of thread and measured the cemetery. Later I used the thread to make candles for Yom Kippur, one of which was still burning when I learned of the news of the shooting in a synagogue in Halle, Germany.

When the Covid-19 pandemic broke out, I started thinking more about the rituals of grave measuring and wick-laying, which were not only practiced before Yom Kippur, but also in other times when, like during the High Holidays, the veil between the living and dead seemed to be thinning. A yizker־book (memorial book) book from Pruzhany, Poland, records that “cemetery measuring was practiced in times of severe illness.” In philosopher Salomon Maimon’s 18th century memoirs, he writes that his mother-in-law goes to the cemetery and orders a measurement when she fears she is being haunted by an angry spirit.

Like the red bands which are sometimes worn by followers of Kabbalah – made by wrapping red string around Rachel’s tomb in Jerusalem – the rituals of grave measuring and wick-laying are also rituals of protection, which call on the connection with ancestry to protect the living from God’s anger and remind him of his love for the Jewish people.

This year, as we begin the new year with such uncertainty, perhaps these customs can once again have meaning. As many of us attend Yom-Kippur services on Zoom, we can remember the women who, even though they were not always welcome in the synagogue, found a way to light it with their soul-candles.

For anyone who wants to learn more about the rituals or try them out, a full source-sheet and ritual guide can be downloaded here

Annabel Cohen is a PhD student in Modern Jewish Studies at the Jewish Theological Seminary, New York, and a Kohenet in training at the Kohenet Hebrew Priestess Institute. She spent the last year as a student on the Paris Yiddish Center’s Yiddish Immersion Program, where she studied these practices.