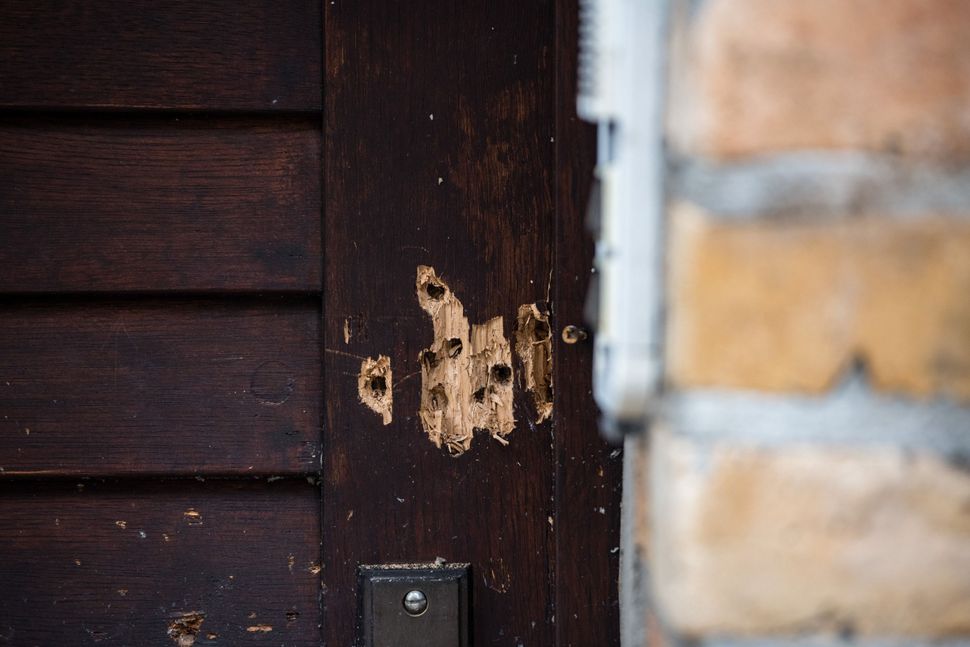 The door to the synagogue in Halle, Germany, riddled with bullet holes after an attempted attack on Yom Kippur, October 10, 2019. Image by Jens Schlueter/Getty Images

It was during the Torah reading on Yom Kippur morning that Rabbi Jeremy Borovitz, a visitor to the little synagogue in Halle, Germany, noticed the security guard staring intensely at his video monitor and trying to get the attention of the community president, Max Privorozki.

“And then we hear a boom, like a very loud noise, and a bunch of other people crowd around the screen,” Borovitz recalled in an interview on Thursday. “Either Max or Yoisel the prayer leader said, ‘Women, get down from the balcony, everybody let’s evacuate the synagogue,’ and then a bunch of people were watching the screen, and then I think Yoisel said ‘Everybody get out, everybody get out.’ He said it in a more panicked voice.

“After Yoisel started screaming, I did hear a pop-pop-pop-pop-pop-pop-pop, and then a couple of other pops, and that was an indication for me that something was really wrong,” he continued. “It takes a couple of minutes in a situation like this to realize what’s actually happening.”

What was happening, of course, was that a gunman who had published an anti-Semitic screed had tried to break into the synagogue on the holiest day of the Jewish year and killed two passersby instead. The hate-inspired attack added to a spate of terrorism at synagogues and other houses of worship over the past year. The Halle gunman live-streamed his attack, as did the shooter in Christchurch, and more than 2,000 people watched it on Twitch before the video was shut down.

For Borovitz, 32, and his rabbi-wife, Rebecca Blady, 29, it was an unusual Yom Kippur even before the terrifying disruption. They are Americans who moved to Berlin in May to run a grassroots program of Jewish spiritual and cultural events, and had decided somewhat randomly — because the prayer leader was the friend of a friend — to take a group of about 20 people to Halle for the holiday.

“The one day of the year where the synagogues in Berlin are absolutely packed is Yom Kippur,” Borovitz explained. “There are lots of synagogues in Germany that are not packed, that are filled with a handful of Russians who are older. We had the idea, wouldn’t it be cool if we brought a bunch of young people to one of these synagogues.”

Halle, about a two-hour drive from Berlin, has some 240,000 residents, and about 600 Jews, Borovitz said he was told by Mr. Privorozki. Perhaps one-tenth of those were in shul, he said, joined by the group from Berlin, who added meditation, song sessions and Torah study around the scheduled prayers.

Halle’s grand synagogue was destroyed during Kristallnacht in 1938, so the congregation now meets in, essentially, the former funeral home, on the grounds of the cemetery; much of the Berlin group’s program took place in a room once used for ritual purification of the dead, Rabbi Borovitz said, so “there was already this weird creepy element to the day.”

On Tuesday, the group had asked their Halle hosts why there was no police presence outside the synagogue, as there is in Berlin. “But there was a wall with gates, and they were all locked,” Rabbi Borovitz noted. “That morning, I was standing in the doorway, the same doorway he would later shoot, letting people in because it was before the security guard got there.”

The police arrived shortly after the pop-pop-pop, and said no one could leave the premises. Borovitz and Blady scrambled to find two missing members of the group — one had gone back to the hotel and the other was sitting on a bench — and to get in touch with the nanny they had hired to watch their 15-month-old daughter so they could focus on praying. Then, they reopened their books.

“We were in locked, so we decided O.K., let’s finish the prayers,” he recalled later. “We finished the Torah service, we did the haftorah, and Musaf. That finished at 3:15.”

Then, Privorozki announced that the congregation was being evacuated. The group gathered up their things: food they had brought to break the fast, “which the police were not happy about,” a shofar, prayer books.”

They ended up in a hospital cafeteria — “which is exactly where you want a bunch of hungry Jews at the end of Yom Kippur — where they conducted Neilah, the concluding service, blew the shofar as the holiday’s finale, sang and danced.

“And then a doctor bought us all a beer,” he said. “As soon as we finished the prayers, he said, ‘I have a very important question, who needs a beer?’ It was an incredibly warm moment.”

Borovitz, who was ordained by Rabbi Danny Landes and describes himself as “not not Orthodox,” and Rabbi Blady, who graduated in June from Yeshivat Maharat, call their Hillel-affiliated program Base Berlin. The couple, whose first conversation seven years ago was about their mutual love for Jewish Europe, started it informally in 2016, when they rented an apartment for a month, posted on Facebook that they were throwing a party, “and 27 people showed up, only one of whom we had ever met before,” he said.

They came back the next year for two months, and, in May, started a stay they expect to last at least two years. “We have a big apartment in Kreuzberg and we do programming out of our apartment, and we also do some crazy ideas like let’s go to this small town of Halle for Yom Kippur,” Borovitz explained as he finished some lentil soup late Thursday evening during a phone conversation with the Forward.

Blady’s Facebook post about the shooting had 2,700 likes, 925 shares and 297 comments after 23 hours. “Babe, you went Jewish viral,” her husband joked during the interview. They were quoted by numerous American, German and Israeli media outlets. And some friends back home suggested maybe they should pack up.

“There’s going to be a lot of people who are going to say a lot of things because this was a synagogue shooting in Germany, but it’s less than a year since Pittsburgh and Poway,” Borovitz said, referring to the deadly shootings at American synagogues.

“We’ve definitely gotten messages like come home, you’re not safe there — I don’t understand those messages,” he added. “Most American synagogues don’t have walls and gates that won’t let gunmen in, and Germany did and it saved our lives. It’s a scary time to be Jewish.”

Next Yom Kippur, he said, they might just go back to Halle.

“We went through something together with these people, these people we didn’t know, these people we don’t have so much in common with other than we’re Jews so we got together on Yom Kippur to pray,” Borovitz explained. “This will certainly change our work, but I can’t say how. I’m not a prophet.”