This 102-year-old activist was born into the last pandemic. Now she has one message: Vote! 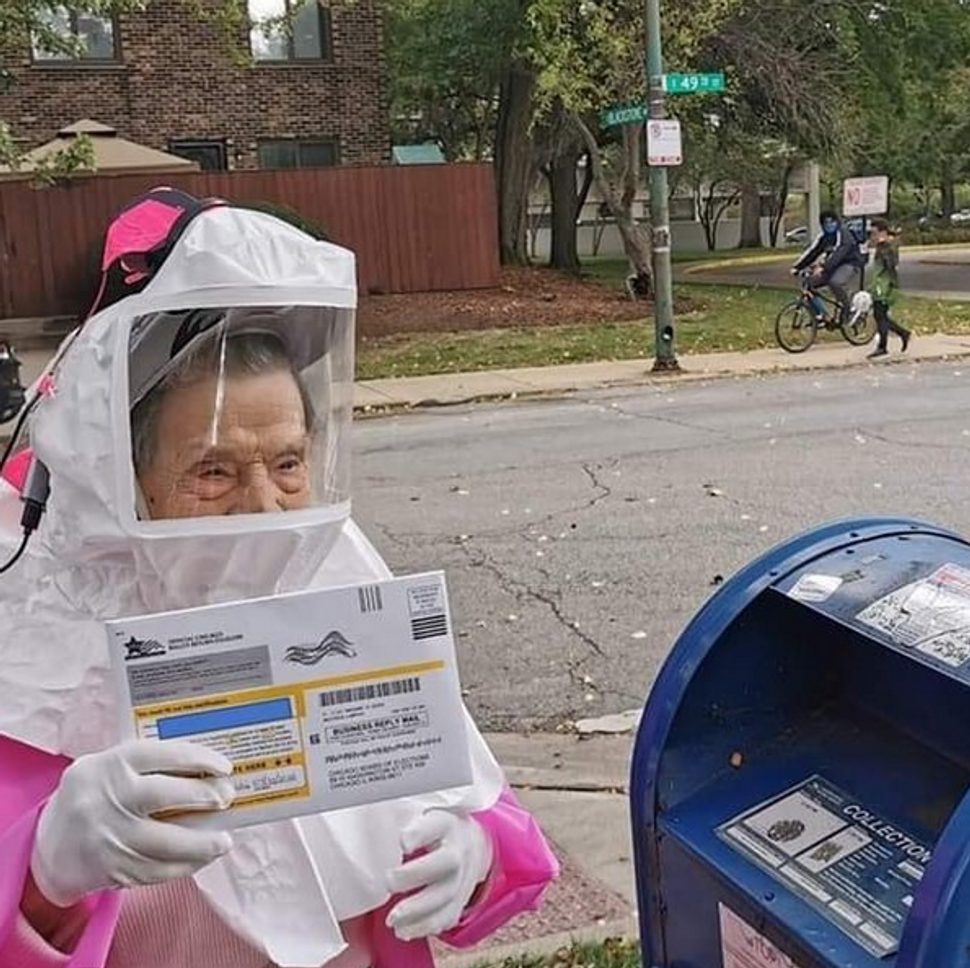 Beatrice Lumpkin at the ballot box. Image by Soren Kyale

The snapshot showed an elderly woman doing what thousands of Americans are doing this week: mailing her ballot for the presidential election.

Yet it also captured the surreal nature of being a citizen at this precise moment in American history. The voter in question — 102-year-old Beatrice Lumpkin — was born in 1918, a year when a global pandemic was raging and women lacked the right to vote. She could never have predicted that in 2020, she would don a DIY hazmat suit to cast her ballot.

For Lumpkin, a lifelong union organizer whose mailbox selfie went viral earlier this week, voting is a sacred tradition. She hasn’t missed an election since she cast her first vote for Franklin Delano Roosevelt in 1940. And not even the second global pandemic of her lifetime could make her skip this year’s.

“I sent in [for it] the first day I could, and I sent it back the second day I got it,” she said of her ballot, assuring me that she’d also tracked its journey through the postal system until it arrived in the right hands.

That veneration for the ballot box didn’t come from nowhere. As Lumpkin put it in an interview and in her 2013 autobiography “Joy in the Struggle,” her sense of civic duty is a testament both to her decades-long career as an activist and the Jewish immigrant milieu into which she was born just over a century ago.

Good morning! This is 102-year-old CTU retiree Bea Lumpkin casting her vote-by-mail ballot. If Bea can do it, anyone can do it. Vote!

Lumpkin spent her formative years in a working-class Jewish neighborhood in the East Bronx. Like almost all their neighbors, her parents were Eastern European immigrants who worked in the garment industry, first in factories (including the notorious Triangle Shirtwaist Factory) and then as owners of a small hand-laundry business. Before coming to America, they’d been active members in the Jewish Socialist Bund; in America, they subscribed not to the Forverts but to its Russian Communist rival, Di Varhayt. Lumpkin picked up her leftist tendencies from the stories her parents told of strikes in Tsarist Russia — as well as from her first-hand observations of the meager returns their back-breaking work in America brought them.

Lumpkin has no memories of the Spanish Flu, but it affected her family deeply: Her younger brother caught an unrelated illness and died during the pandemic, a tragedy Lumpkin attributed partly to the care he received at an overburdened city hospital.

“My whole life would have been different if I had a brother close to me in age,” Lumpkin said, noting that many families have suffered similar tragedies in recent months as the coronavirus pandemic has forced hospitals to divert resources from patients with other illnesses.

The Great Depression put an end to the family’s laundry business, but their ensuing financial instability sparked Lumpkin’s political awakening. As a teenager, she joined the Young Communist League (YCL), a political group that dispatched her to pro-union and anit-fascist picket lines. In 1935, 17-year-old Lumpkin was one of 10,000 demonstrators protesting the display of a Nazi flag on the the SS Bremen, a German ocean liner. The flag was eventually torn down, and the incident garnered so much attention that Nazi propagandist Joseph Goebbels complained about it.

But the YCL was also a social outlet. Lumpkin took her first train ride on a field trip with the group and recalled frequent trips with her colleagues to the Metropolitan Museum of Art, where admission was free and concerts were frequent.

“We’d go the whole day, and sit among the marble and listen to great music,” she said.

Lumpkin maintained her YCL membership throughout her stint at Hunter College. She graduated in 1939, after taking a year off to organize laundry workers as a staffer for the Congress of Industrial Organizations (CIO), a union federation. The next few years were busy ones: she worked as an automat bus girl, a typist, and, during WWII, as a radio technician. She got married, gave birth to two children, and got divorced. She got married again, this time to Frank Lumpkin, a Black steelworker who would be her constant companion until his death in 2010.

“He liked everything I liked, or at least he put a good show,” Lumpkin wrote in her autobiography. That included organizing: One of their first challenges as a married couple came when a police officer clubbed Frank during a demonstration against racist admissions policies on Lake Erie cruise ships.

In 1949, the Lumpkins moved to Chicago, where Beatrice embarked on yet another career. For the next several decades, she taught math in the city’s public schools and at Malcolm X College. In the 1960s, students and civil rights activists demanded that educators start teaching Black history and reading Black authors, long ignored in the classroom. Battles over curricula were largely focused on humanities fields, but Lumpkin started researching the history of mathematics in Egypt. Eventually she came to believe that while contemporary historians attributed most early mathematical discoveries to Greco-Roman civilization, ancient Egyptians and several other non-European societies deserved more credit. Her research resulted in “Senefer, Young Genius in Old Egypt,” a children’s book about math, as well as series of lectures persuading other teachers to devote classroom time to the “multicultural roots of mathematics.”

You might think after such a career, a centenarian might take a moment (or a year) to rest on her laurels. But you’d be wrong. Martin Ritter, a political organizer with the Chicago Teachers Union (CTU), said that, though Lumpkin retired years ago, she’s a mainstay at union events, always willing to attend a rally and often imploring fellow union-members to attend demonstrations for related social justice causes. An elected Retiree Delegate, she acts as a “moral voice” at monthly union meetings, to which she often arrives via public transportation. When she gets up to speak, Ritter said, no one enforces the two-minute talking limit.

“Everyone shuts up, and she has command of the floor,” he said.

There may be fewer in-person meetings these days, but Lumpkin isn’t exempt from the work-from-home grind, either.

“I’ve been on a lot of Zoom meetings,” Lumpkin said when asked about her quarantine routine. “I’m quite active in the retiree movement, which means fighting to expand Medicare, lower the price of prescription drugs, that’s a huge issue.”

For Lumpkin, accustomed to organizing on the street, online activism is a big change. So when she gets a chance to return to her roots, she takes it: Over the summer, when the CTU organized socially-distanced car caravan demonstrations to protest police violence, she was all-in.

“I no longer drive,” she noted. “But if I have the offer, I put on my PPE and get into a properly sanitized car.”

The PPE in question is a custom-made, battery-powered hood that includes a fan and a HEPA filter to ensure that Lumpkin is breathing purified air. It was designed by her grandson Soren Kyale, a science teacher in the Chicago Public Schools — and a proud member of the union to which she once belonged.

Lumpkin admitted that Democratic candidate Joe Biden wasn’t her first pick — in the primary she enthusiastically voted for Bernie Sanders, who brought socialist causes into the mainstream.

But, she said, “There’s no question that everything [Sanders] stands for requires the election of Joe Biden, and the main part of that is that Biden supports our right…to join a union.”

Lumpkin has long been worried about cutbacks to voting rights, but this election has her especially worried that voter suppression could enable what she calls “a fascist takeover” in the United States. Which is why, she said, her message to new fans was simple: get out and vote.

“Racism lives on, antisemitism lives on,” she said. “It’s always important for Jews to vote.”

This 102-year-old activist was born into the last pandemic. Now she has one message: Vote!