Like the Jewish women laureates before her, Louise Glück sees humanity in God 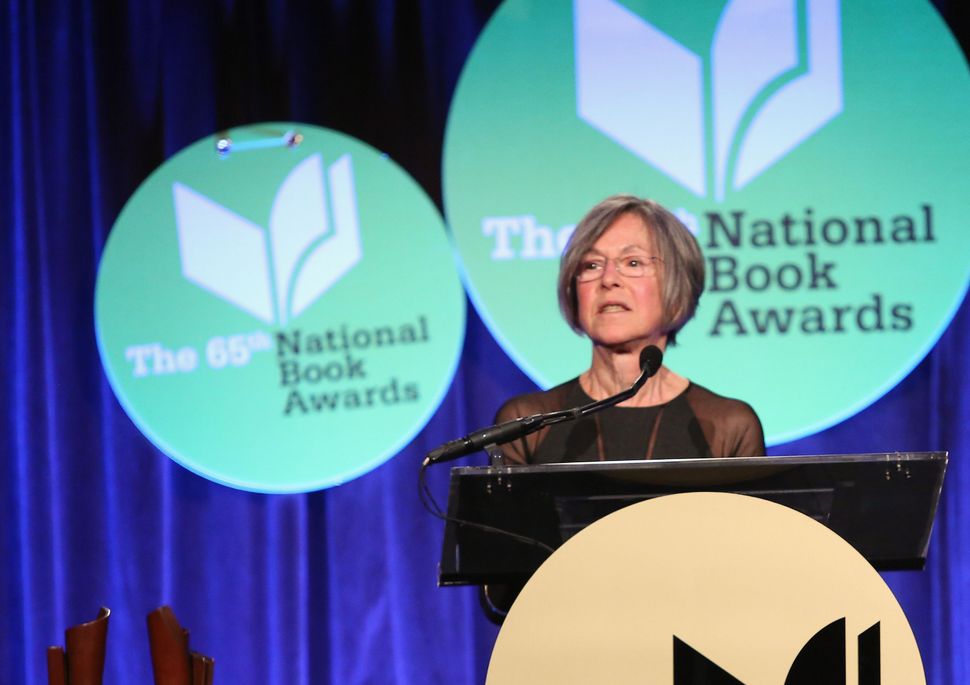 There’s much that separates Glück, whose work has long been known for its deceptive clarity, from her Jewish predecessors. She is the first American Jewish woman to win the prize, born and bred in New York City and Long Island, and steeped in the particulars of that Jewish culture. She is the most mysterious public presence: Over the 50-plus years of her career, she’s given few interviews, and has been as likely to write in the voice of God as that of a flower.

And she appears to be preoccupied with an internal world, where they are overtly concerned with external politics. Sachs, a Swedish poet, was best-known for grappling with the long cultural memory of the Holocaust; Gordimer, a white South African novelist opposed to apartheid, was long banned from publication in her home country; Jelinek, an Austrian poet and playwright, is well-known for affiliations perceived as radical, including a former attachment to the Communist party. By contrast, in a 2012 review of Glück’s collected poems, the New Yorker critic Dan Chiasson wrote that “Outside her poems, much noisy history has occurred, this past half century. Inside them, you find, X-rayed by an unusually analytic mind, only the kinds of thing that Emerson once said a poet needed: ‘day and night, house and garden, a few books, a few actions.’”

Yet it’s precisely in that last realm where, in fact, Glück finds a through-line with her predecessors. While her work is rarely wrought with the same kind of explicit urgency, its politics, in a Jewish sense, run deep and true.

Consider these lines from “April,” written in the voice of God:

I expected better of two creatures
who were given minds: if not
that you would actually care for each other
at least that you would understand
grief is distributed
between you, among all your kind, for me
to know you, as deep blue
marks the wild scilla, white
the wood violet.

And compare them to a stanza from Sachs’ “Flight and Metamorphosis,” as translated by Joshua Weiner:

Fate twitches
in the bloodcoursing meridians of a hand—

Everything is endless
and hung on the rays
of a distance.

What do you see? A concept of a God who marvels at humanity, and is disappointed by it, and whose disappointment is violent in a quiet way. This God doesn’t dole out eternal punishment, but rather the everyday subjection of simply being human, with human flaws. You will live with sorrow, the poets say; you will live with the dictums of a hungry and impersonal fate; you will strive to find beauty, and that itself will be a form of agony.

Look to Gordimer’s Nobel Lecture, in which the idea of God was a recurring theme. “Perhaps it is the positive knowledge that humans now possess the means to destroy their whole planet, the fear that they have in this way themselves become the gods, dreadfully charged with their own continued existence, that has made comic-book and movie myth escapist,” she said. It was a suggestion rooted in personal experience: Gordimer had seen, firsthand, how eager humankind could be to degrade themselves and their world. But the idea was rooted, too, in a frightening concept of holy power that looks much like Glück’s and Sachs’. Gordimer understood that the worst framework a deity could design for human torment was to give them absolute power over their lives and choices, and yet leave them fundamentally incapable of ending the suffering around them.

Jelinek shares that understanding. Long preoccupied with Gotthold Ephraim Lessing’s 18th-century drama “Nathan the Wise,” a parable about the destructive competition between Judaism, Christianity and Islam, she wrote her 2009 play “Abraumhalde,” or “Mining Dump,” as a companion to Lessing’s premise that reflected on the real-life case of Josef Frizl, an Austrian man who imprisoned and repeatedly raped his daughter, over time forcing her to bear seven of his children. Notoriously digressive in her writing, Jelinek designed her play, preoccupied primarily with the connection between religion and sexual violence, to be a pointed evolution on the cycles of inevitable conflict laid out in “Nathan the Wise.” The play’s most consistent motif? “We are God.”

Between their work, the four women suggest that the God who could oversee the Holocaust, apartheid and a man’s torturous sexual abuse of his daughter is ultimately not so different from the God who could tenderly mark each living person with the stain of grief. The offenses are different, but they share a tenor, a sense that the highest forms of governance are inseparable from cruelty. In the laureates’ work, that truth infuses each realm of existence, from disillusionment with the institutions that oversee society to questions about why an ordinary interior life — Glück’s favorite subject — must always be so unsettled.

The idea would provoke despair, were it not expressed, by all four writers, in ways so oddly lovely. “Then death appears, like the answer to a prayer,” Glück writes, in “The Myth of Innocence.” “No one understands anymore/how beautiful he was.”

Like the Jewish women laureates before her, Louise Glück sees humanity in God