In ‘Raised by Wolves,’ a warning about our pandemic isolation 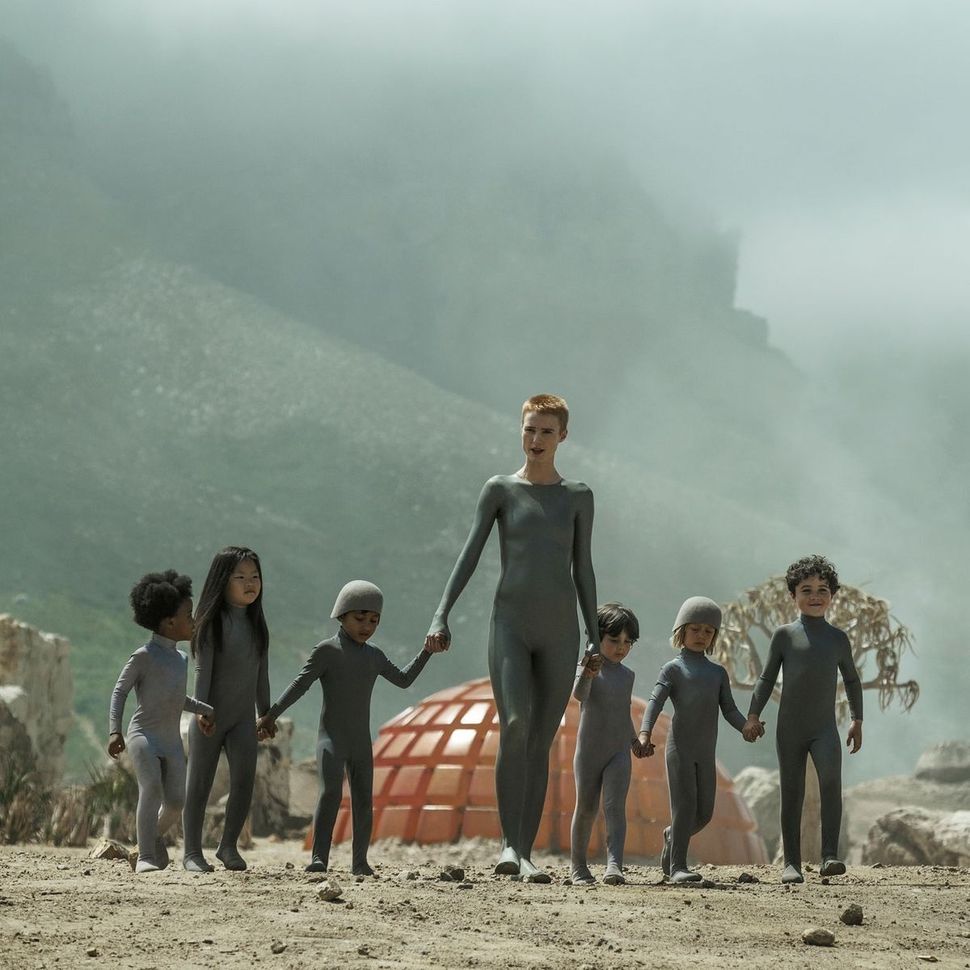 Raised by Wolves Image by HBO

In HBO’s timely new dystopian drama, “Raised by Wolves,” two human-like robots are raising a small group of children on a distant, unforgiving planet. The show’s release happened to coincide with a worldwide pandemic, and, in many ways, its little nuclear family trying to survive now represents all of us. Without large gatherings or extensive travel allowed, we have all become turbocharged versions of 1950s-style nuclear families. This is a story about us — or, what could happen to us.

If you’ve seen “Raised by Wolves,” then you know it does not bode well.

As this show (and reality) illustrates, solitude is not healthy for pack animals such as humans. Yes, the members of this tiny post-apocalyptic tribe are chummy and self-sufficient, but they are horribly socialized and severely distrustful of outsiders. You see this right away when a small group of survivors from Earth arrives at their little Garden of Eden and the future robot version of Eve, simply called “Mother,” murders the entire faction of refugees, save one who gets away. Like a wild animal — like a wolf, actually — her message is clear: Don’t mess with my baby. Campion is the only surviving child, and, if he was nervous before about the fact that his parents were robots, he now has bigger concerns.

Things only get worse for Campion when Mother kidnaps a handful of children from one of the remaining ships to raise as replacements for the ones who have died. Since Campion has no idea how to behave with anyone aside from his robot parents, he does not mesh well with these children, who are only slightly better off than he is, since they’re all from a very religious cult. In a way these children have also been raised by wolves, since the Mithras — based on a real sun-worshipping cult from Roman times — behave like many cults do to in regards to children, by which I mean they have very little to do with them.

Only Paul, Campion’s main competitor from the new arrivals, has experienced real human affection. His parents are not actually his biological parents either; they are atheists who stole the identities and faces of Paul’s real parents in order to get their seats on the “Ark,” a spaceship that took human survivors from an Earth demolished by civil war. Not only does Campion need to figure out a way to get along with these new children, he must do this in spite of the fact that he’s the only atheist; at times, he seems to want to side with them, praying with them and scheming to steal his mother’s eyes, the source of her murderous powers. At others, he acts jealously and violently towards them.

Mother, who until now has actually been a pretty good mother with the exception of all that mass murdering, chooses this moment to lose focus of her mission almost entirely. She finds a digital pod where she can access lost memories, and here, she falls into a digital version of Narcissus’s pond. During her daily pod excursions, she falls in love with the memory of her creator, also named Campion, and this love leaves her in a weak position. First, she is nearly destroyed by humans and then later she gets infected with a virus from the pod. Most importantly, the distraction makes her unavailable to give Campion the guidance he might need, and so his behavior gets worse, eventually leading him into a violent confrontation with Paul.

It is a tad annoying to watch a kid behave so destructively, but, considering his upbringing, can anyone blame him? Unlike Mowgli in the “Jungle Book,” children who have been raised in solitude or literally by wolves are generally incapable of becoming normal once they’ve reentered society. The real-life version of Mowgli, a 19th-century boy found in India at the age of six, never learned to speak or behave normally, and died very young from tuberculosis. There are also many documented accounts of children who were raised by dogs in rural Russia; they were also famously difficult to rehabilitate. Years later many would still walk on all fours, and make growling and barking noises instead of speaking. In short, they do not become productive members of society. Which makes sense; people are not meant to be raised by wolves. They are meant to be raised by human parents, preferably ones who love them and keep them safe. They need to interact with other humans as well, not just their parents; grandparents, cousins, aunts and uncles, even strangers in the street.

But Campion has no one who can model normal behavior for him aside from robots who are only programmed to act like humans. The kids from the ship who were raised by the tyrannical leaders of a sun-worshipping cult are not much better off. At least after Mother kidnapped them, though, they are finally somewhat free to create art and play, in addition to now having to work and hunt.

Still, this does not make for a functioning society. Children learn how to be people by watching adults; here, they have only a mass-murdering robot and her pushover husband robot to learn from.

The children’s isolation is the most troubling aspect of their predicament, and that’s what most resembles our current reality. I know of babies born before or during the pandemic who have never met another person aside from their parents; at the park I see shell-shocked toddlers who have no idea how to interact with other children anymore or even play on the equipment. If my daughter tries to approach one of these toddlers, they freeze or cry, or are taken away by their parents before she can get close enough to say hi. It’s a culture of stranger danger on speed; instead of nuclear families, we have shrunk to teeny tiny electron families. Perhaps the more important definition of nuclear is not the impression of smallness, but the one that has the potential to blow up and destroy. When the term first came into common usage, a Cold War was going on, after all, and much like current times, the country’s inhabitants were far more isolated than they had been in previous decades due to fear of nuclear annihilation.

The intention was to live this way only temporarily, until things became safe again; instead, the lifestyle lingered then grew more and more popular as more people become able to afford it. With the rise of divorce and the increase in ability to pick up and move, a child’s world can begin to seem even smaller and less stable. Until 1850, 75% of Americans older than 65 lived with their kids and grandkids. Now, this living situation is far less common. Some might argue that it’s the market pushing towards more and more isolation, but Scott Stanley, writing in Psychology Today, claims that we are the impetus for this trend, because for whatever reason, the more people have the means to, the more they choose to live in this insulated this way

Lockdowns caused by the pandemic have only doubled down on this familial fragmentation, and I find it sad. I grew up in Soviet Ukraine, on the other side of the Cold War, in the same apartment as my uncle and grandparents; my husband also grew up with his grandparents in Israel, where this is still quite common. Sure, it was crowded, but children can feel very loved and cared for in this type of setting. Now, every couple we know lives alone with one or two children, and often nowhere near their parents. Both of our immediate families are only reachable by airplane. Not to mention the extended families — aunts and uncles and cousins — who we rarely saw before travel became nearly impossible; now, we never see anyone we’re related to.

This isolation is a growing trend, for young parents as well as for childless couples This is troubling, especially in current circumstances, as schools are closed and many children not only live in these very small nuclear families, but they also no longer have teachers or other kids to learn from. In the 1950s, it was very common for nuclear families to live close to one another, which created a pseudo-family by proxy.. So how will our children learn to be fully functional, emotionally healthy people? What will this extended isolation do to America’s youth, especially when they already spend so much of their free time in isolation staring at tiny electronic screens?

There has been a well-documented rise in depression among teens since the invention of social media, and even more since the invention of the “like” button around 2014, as reported by Jonathan Haight in his book “The Coddling of the American Mind.” Add to this an overabundance of safety precautions now prevalent among new parents, and it seems like a recipe for disaster for our next generation, many of whom have already reported record high levels of anxiety and depression.

Forcing kids and teens to now stay home indefinitely without socializing at school or after-school sports and activities will make those already-high depression and anxiety rates soar. This is probably true for adults too; in such a divided political landscape, we already spend far too much energy arguing with strangers on Facebook and very little time talking to people in person. Churches and synagogues are closed; stadiums are empty. Perhaps the growing cases of depression and anxiety are actually what’s causing the extreme political division — it’s like a toxicity that feeds itself. The lonelier and sadder you feel, the more time you spend trying to connect with others online, which turns into a myopic preoccupation that intensifies the divide. Judging from the passionate discourse online lately, the lockdowns have increased this problem tenfold. This may be good for advertisers — as reported by the new Netflix docu-drama The Social Dilemma, which discusses the addictive nature of social media — but it is not good for the human psyche.

We don’t need a documentary to explain the possible psychological fallout of the isolation imposed by these continuing lockdowns; we “have Raised by Wolves.” We may be seeing a new Garden of Eden unfold, but there are hints that it’s not the first time an intelligent species has landed there. First, the Mithras followers find a building that could only have been made by humans; and later, Mother discovers a human-like species in the woods. She also discovers that the wild animal the children started eating in the latter half of the season must have started out as humans (in the way Gollum was once Smeagol.) Which means that whoever tried to create a society there before failed; so too did the people of Earth. The civil war between the atheists and the Mithras followers destroyed Earth; judging by what has happened in the first season, their continued dissonance may very well destroy this planet too. In that way, the show serves as not only a gloomy portrayal of mankind, but a proper warning.

In ‘Raised by Wolves,’ a warning about our pandemic isolation