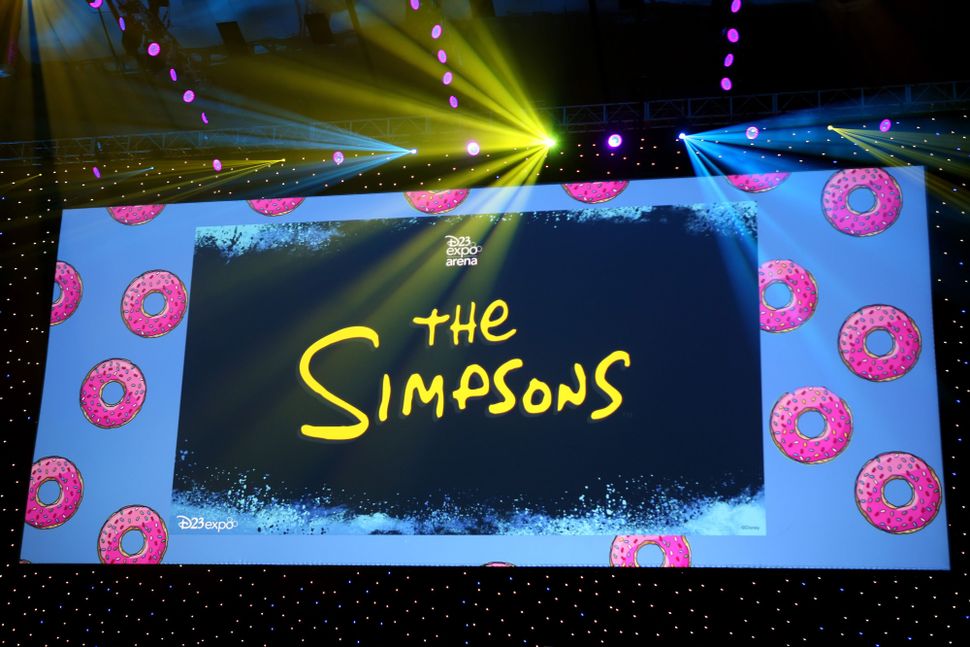 A D23 expo presentation on “The Simpsons.” Image by Getty/Angela Papuga/Staff

While the question of cultural sensitivity and “The Simpsons” remains fluid, the show has always been attuned to the unique concerns of American Jewry. So it’s no real surprise that the forthcoming “Treehouse of Horror” special reminds us of the worst thing President Trump ever said about our voting trends.

In the episode, which opens on Election Day 2020, Homer enters a voting booth and, though he’s sure of what he wants for judges and propositions, stumped when it comes to his candidate for president, he’s stumped.

“Can I write in Judge Judy?” he wonders.

Lisa, long the voice of reason on the show (and according to some timelines, the country’s first “straight female” president) parts the privacy curtain and prompts her father to remember all that’s happened in the past four years.

A catalogue of 50 unbecoming facts about the incumbent then scroll by. Among the litany, which includes “Looks lousy in a tennis outfit” and “Put children in cages,” is this item: “Said Jewish people who vote Democrat are disloyal.”

Trump did do that, in August of last year, invoking an age-old canard of dual loyalty by stating that a vote against him was a vote against Israel. The comment got a rise out of many, causing quite a few Members of the Tribe to rebrand themselves as “disloyal Jew” on Twitter. (Which, as a sidebar, is a far less annoying legacy than the Halloween-themed Twitter handle readjustments inspired by the “Treehouse of Horror” credits.)

But it turns out the resurfacing of this allegation is timely and also evergreen. While the so-called “Jexit” movement long hoped to court Jewish voters over to the Republicans, using Israel as a wedge issue, Jews have, for the most part, remained reliably blue. Around 70% of Jews vote Democrat, and polling from earlier in the year indicates that that’s not changing any time soon. Jewish Democrats don’t appear to have changed their registration to the other party. For many of our stiff-necked people, a donkey just makes too much sense as a mascot.

As former Congressman Robert Wexler wrote in these pages, “Regardless of your assessment of President Trump’s performance on Israel, you can vote for Biden with confidence, knowing that his presidency will reflect the deep friendship he has shown toward Israel throughout five decades in public service.”

So Trump’s claim that Jewish Democrats are “disloyal” to Israel and their fellow Jews, is not only antisemitic, but in fact appears to be wrong in its basic premise. And, not for nothing, but for most American Jews Israel remains a low voting priority, below healthcare, the economy and basically every other major issue on the ballot.

While just a lone bullet point in a long list of horrors, it’s still a chilling reminder of what Trump thinks about the bulk of American Jewry. But if our consistency at the polls is any indication, it’s unlikely to change any minds. Unlike Homer, most of us are anything but undecided.