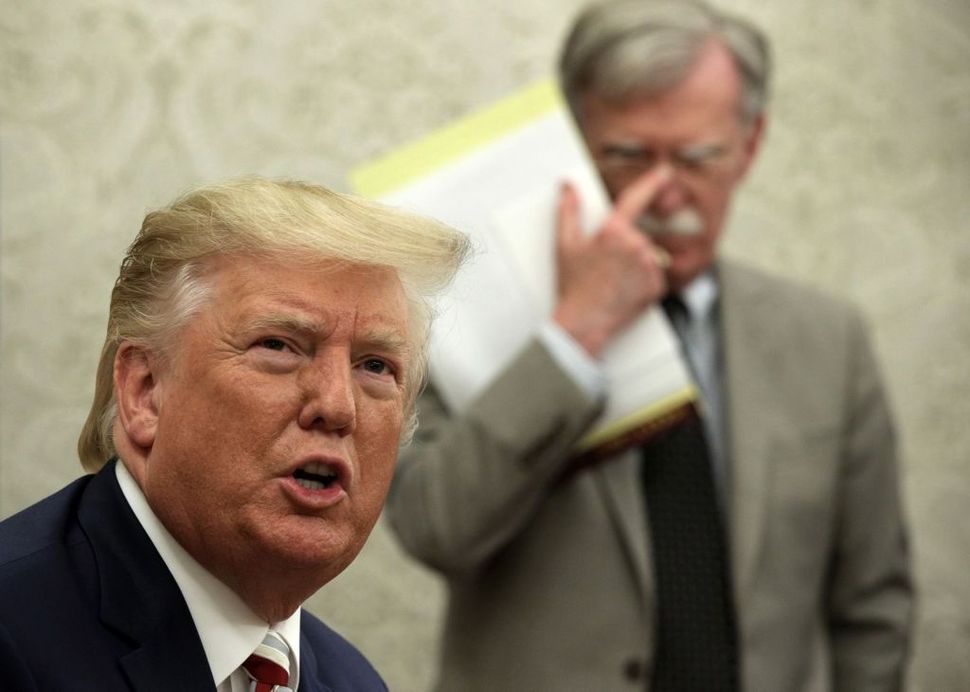 President Donald Trump speaks to members of the media as National Security Adviser John Bolton listens during a meeting with President of Romania Klaus Iohannis in the Oval Office of the White House, August 20, 2019. Image by Alex Wong/Getty Images

President Trump on Wednesday stated that Jews who vote for the Democratic Party were “very disloyal to Israel,” doubling down on language that led several major Jewish organizations to condemn him the previous day.

The president claimed on Tuesday that Jews who vote for Democrats show “either a total lack of knowledge or great disloyalty.” Prominent Jewish groups claimed that this invoked the anti-Semitic “dual loyalty” conspiracy that Jews are more loyal to Israel than their home country – though some admitted that it was unclear to whom exactly Trump thought Jews were being disloyal. And the Republican Jewish Coalition, claimed that Trump only meant that Jews were being “disloyal to themselves.”

Condemnation was swift to come in. “@realDonaldTrump verified that he invoked an anti-Semitic trope, asserting that American Jews should be ‘loyal’ to Israel by supporting him,” tweeted Jewish Democratic Council of America executive director Halie Soifer. “90% of American Jews consider themselves ‘pro-Israel’ and about 3/4 of them are Dems because Jews vote their values.”

Trump was also criticized for writing a series of tweets on Wednesday morning defending himself by quoting conservative commentator and conspiracy theorist Wayne Allyn Root – a Jewish convert to Christianity – who claimed that Israeli Jews “love him like he’s the King of Israel.”

Trump seemed to continue on that line of thought in his White House lawn appearance. When asked about his approach to the trade war with China, Trump reportedly stated, “I am the chosen one.”