In the first episode of Showtime’s “The Good Lord Bird,” an exuberant adaptation of James McBride’s novel about John Brown’s final days leading up to his daring raid of the Harpers Ferry armory, the narrator, Henry, describes the abolitionist’s followers.

“John Brown’s fearsome army weren’t nothing but a ragtag assortment of the scrawniest, saddest-looking individuals I had ever saw: bushwhackers, sticky-roped cattle rustlers, an Indian — even a Jew.”

Well, yes. But also not quite. It’s historically true that by the time Henry, a fictional creation who Brown mistakes for a girl and lives as one among Brown’s men, would have entered Brown’s circle there was just one Jew among his ranks. He was a man named Theodore Wiener (sometimes spelled “Weiner”), who Brown’s son Salmon once described as a “big, savage, bloodthirsty Austrian” who “could not be kept out of any accessible fight.”

But Wiener — who we very briefly see in the show and who was actually Polish — was not Brown’s only real-life Jewish co-conspirator. He was certainly the least likely of Brown’s three Jewish immigrant acolytes to become his accomplice.

As Wiener’s business partner August Bondi recalled in an 1884 letter, “For nothing, however, did I admire John Brown as much as for the conversion of my friend Theodore Wiener from a rank pro-slavery man to an uncompromising abolitionist, which happened in the winter of ’55 to ’56.”

Wiener arrived in Kansas in 1855, following Bondi and his other associate from Missouri, Jacob Benjamin — who originally hailed from Bohemia — to open up a store on Bondi’s land. Through his association with the Brown family, Wiener became a “Free-Stater” in a Kansas then regularly provoked by the so-called Border Ruffians, pro-slavers from Missouri.

It was the time of “Bleeding Kansas,” when the territory’s future as a slave or free state was at issue. While many of the settlers came from the north, and were against the institution, the 1854 Kansas-Nebraska Act left slavery up to a popular vote. The pro-slavery faction’s tactics were often violent and the Ruffians were known to cross into Kansas during elections with rifles and boot-tucked bowie knives to intimidate their way to their desired result.

Pro-slaver settlers constantly agitated and threatened Free-Staters in the “Dutch settlement,” near Osawatomie and Bondi’s home on the Mosquito Branch of the Pottawatomie Creek, in Franklin County, where he ran a trading post. This harassment led Bondi to seek out the help of the Browns, whose cows would occasionally wander onto his property.

“One afternoon some thirty head of Devon cattle came into our bottom, grazing, and half an hour later came two men to drive them home,” Bondi recalled in “Autobiography of August Bondi,” which was privately published in 1903 and remains the most-developed account of the life of Brown’s Jewish comrades. “The two men were Jason and Owen Brown. They stopped about half an hour with us and told us they were Free State men. I told them we might need some help, as I feared the pro-slavery settlers would sooner or later attempt to drive the Dutch abolitionists from the Branch. They cheered us and said any time you let us know, we will come to your assistance. We are four brothers, [the other two were John, Jr. and Frederick Brown] all well armed.”

These words of bonhomie were surely agreeable to Bondi, who came of age in Vienna and, as a teenage student, participated in the 1848 revolutions, which pushed for democracy and the rights of men throughout Europe. Bondi’s family and education instilled him with a liberal humanism, and he came to know and detest the alien institution of slavery in his first days in the United States, where he arrived at the age of 15.

On his way to New Orleans — where he and his parents would stay before settling in St. Louis – he made a detour to a plantation to collect wood.

“I went ashore and there saw, for the first time, Negroes at the sugar mill,” Bondi wrote in his autobiography. “They were late imports from Africa, men and women clad only in coffee sacks, open at both ends, slipped on and tied around the waist.”

In 1851, while working as a sailor in Galveston, Texas, Bondi had a more intimate encounter with the evils of slavery. When his captain ordered him to speed up the unloading of their boat, Bondi poked the enslaved men handling cargo with cordwood.

Bondi immediately requested his pay and returned to St. Louis, where he became involved with the Free State Democratic Party along with other refugees from the ‘48 revolutions. Four years later, in 1855, he left for Kansas after reading a New York Tribune editorial urging “freedom loving men” to “hurry out to Kansas to help save the state from the curse of slavery.”

Like Bondi, the Brown brothers endeavored to be such saviors. John Brown, Jr. organized a military company to fend off the aggression of the Border Ruffians, and both Benjamin and Bondi joined up. But it wasn’t until John Brown, Sr.’s arrival in late 1855 that the war really got started.

Bondi first met John Brown, who appeared ready for war with a cavalry saber and a heavy revolver, on the day of an election arranged by Free-Staters.

“We shook hands,” Bondi wrote of his first meeting with “Old Man” Brown, “and he said he had come to Kansas to do what he could to help organize the Free State people for successful resistance.”

He didn’t have to wait long. In May of 1856, Border Ruffians sacked the town of Lawrence, and Bondi joined one of two companies to defend it from another attack, one led by Brown, who was just beginning a long summer of sorties. Wiener provided provisions for the 65 men, which prompted pro-slavers to burn down his store and home. On the way to Lawrence, the two rifle companies heard they were too late to save Lawrence and that Ruffians were threatening their own homesteads as well as their wives and daughters. Wiener then entered the company, perched on his gray pony, as they reversed course back to Pottawatomie.

On returning, Brown became infamous, devising what is now known as the “Pottawatomie Massacre,” in which he and his men murdered prominent pro-slavers in the Dutch settlement. Wiener was part of the crew. Some accounts say he did not participate in the murders but only stood guard, while others say he stabbed and hacked to death a couple of men. 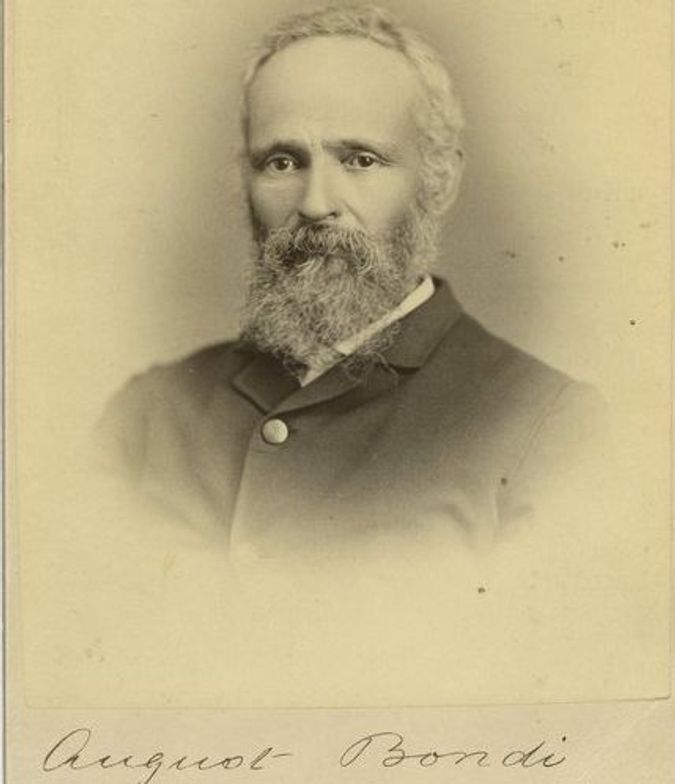 Before the month was out, Ruffians burned down Bondi’s cabin, stole his cows and horses and ransacked his trading post all — as Bondi noted in his diary — “in the presence of federal troops.”

On May 25, 1856, the evening after the final day of the massacre, Bondi and Wiener met in John Brown’s cabin on the banks of Middle Creek, and pledged to defend Free-Staters in any community from the Ruffians. On June 2, both men fought with him in the Battle of Black Jack, Brown’s company’s first major engagement.

As recorded in Leon Hühner’s 1908 book, “Some Jewish Associates of John Brown,” they were not a formidable militia. “Captain” Brown was armed with a sword and heavy revolver, Wiener a double-barrel gun and Bondi an antique flintlock musket and the rest of the men were similarly equipped. Regardless, they arrived to defend the residents of Prairie City from Captain Henry C. Pate, a Virginian and the head of a Ruffian militia called Shannon’s Sharp Shooters, which had made their camp in the town of Black Jack. The Sharp Shooters were a party to the sacking of Lawrence, and were believed to be the outfit responsible for setting fire to Wiener’s home and business. After camping out for several days, Brown and his men crested the hill toward Pate’s encampment.

“We walked with bent backs, nearly crawled, and the tall dead grass of the year before might somewhat hide us from the border ruffian marksmen, yet the bullets kept whistling,” Bondi recalled many years later in a letter. “Wiener was 37 and weighed 250 lbs. I, 22 and lithe. Wiener puffed like a steamboat, hurrying behind me.” They then conversed in Yiddish.

Pate surrendered and Brown’s company captured their arms, ammunition and plunder from the attack on Lawrence. Brown’s profile soon grew with August 1856’s Battle of Osawatomie, in which some 400 pro-slavery forces attacked the town. Bondi and Benjamin were among the 30 men Brown marshaled to Osawatomie’s defense. Brown’s son Frederick died in the battle. 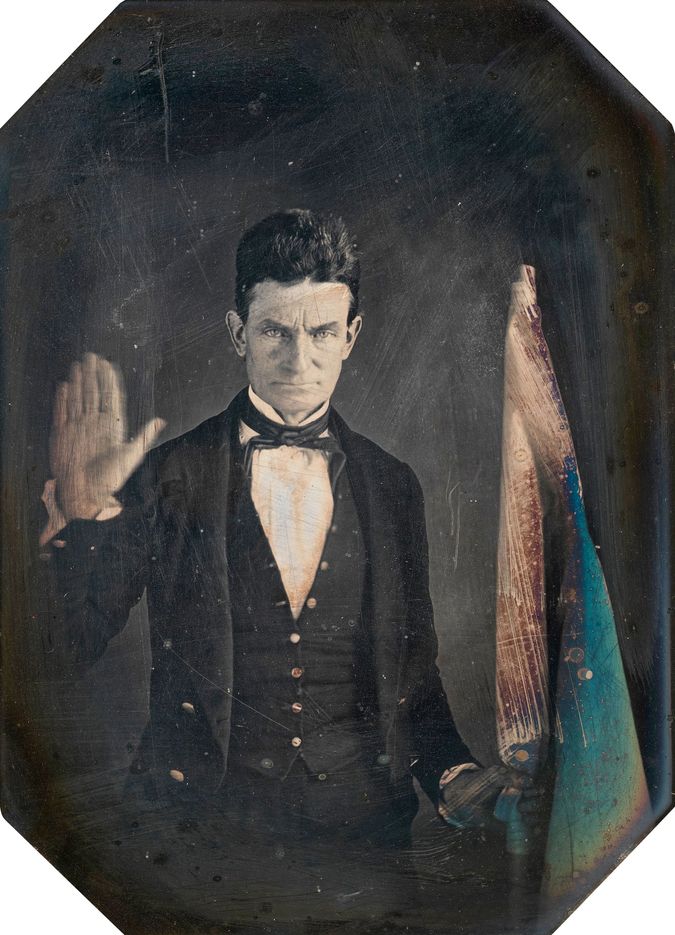 “We were united,” Bondi later wrote of Brown’s company, “as a band of brothers by the love and affection toward the man who, with tender words and wise counsel, in the depths of the wilderness of Ottawa Creek, prepared a handful of young men for the work of laying a foundation of a Free Commonwealth.”

After Osawatomie — the name of which would, for the rest of his life, be associated with John Brown’s struggle and his loss — Brown left Kansas until 1858. He reappeared that year under the alias “Shubel Morgan,” the name he gives a group of pro-slavers in the opening minutes of “The Good Lord Bird.”

On Brown’s return, his men shifted their purpose from a group defending Free-Staters to a military company actively fighting slavery along the Kansas border. Bondi and Benjamin were no longer a part of Brown’s operations following his two year departure, but both would fight in the Union Army, and Bondi in particular was an outspoken advocate of abolition and a member of the Free State Party. He recalled Brown’s sage words, which urged his followers to “never accept existing laws and institutions if our conscience and reason told us that they violate human rights.”

As Brown’s antislavery campaign developed, he met with Frederick Douglass and Harriet Tubman and launched a bold plan to seize a federal arsenal and spark a liberation movement throughout the American south.

Among the initial company of 15 mustered men who joined Brown in his fight against slavery, some of whom would fight at Harpers Ferry, one could find at least one formerly “rank pro-slavery man” — a Jew named Theodore Wiener.