In Judaism, even God respects the vote 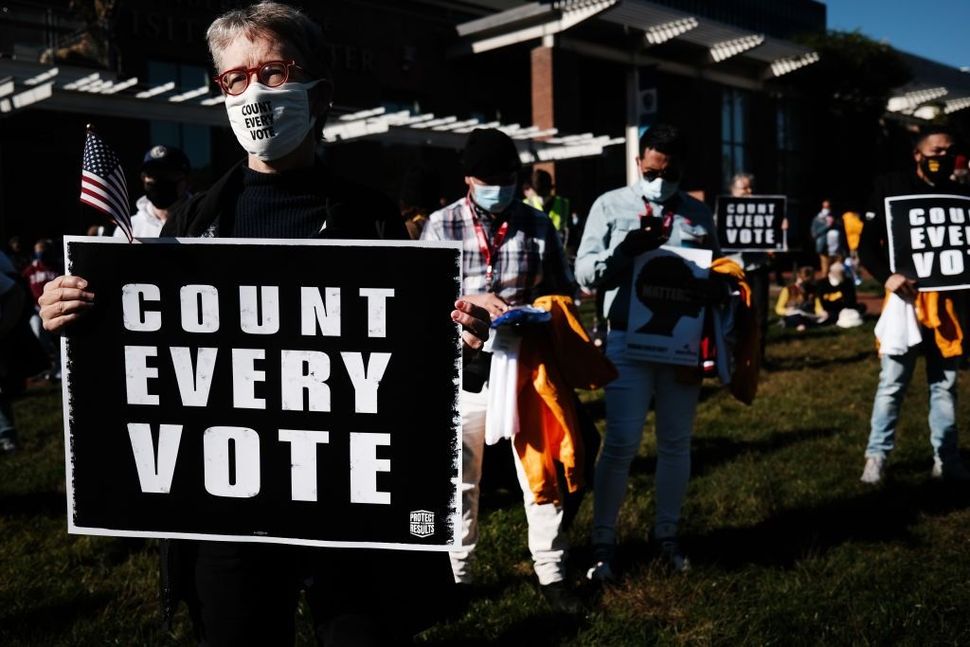 PHILADELPHIA, PENNSYLVANIA - NOVEMBER 04: People participate in a protest in support of counting all votes as the election in Pennsylvania is still unresolved on November 04, 2020 in Philadelphia, Pennsylvania. Image by Getty Images

The story of Akhnai’s oven is one of my favorite Talmud passages to tell non-Jews, because it so perfectly captures the contrast between Judaism and the dominant understanding of religion in the West. In it, a group of rabbis disagree with God, and God, in response, smiles and states, “My children have triumphed over Me; My children have triumphed over Me.” In what other religion would God be happy to be defied?

That Jews lack an inherent respect for authority is a familiar stereotype; think dinner tables full of people talking over each other in movies and on TV. And this lack of respect is written into the very function of Jewish text — the Talmud and midrash are full of arguments about what a text or piece of halakha means without any consideration of seniority.

But disagreeing with God seems like a whole new level. What is holy and absolute if not God’s word?

In Baba Metzia 59a-b, a group of rabbis argue over the purity of an oven. I’ll spare you the details. What’s important to know is that one rabbi — Eliezer — disagrees with the rest of the group and calls upon God to show that he’s right. Gesturing to a tree to prove his point, it flies out of the ground. A river reverses its flow. The walls of the study hall begin to collapse, though one of the other rabbis scolds the walls for their lack of respect for rabbinical debate, and they right themselves. Finally, a heavenly voice echoes out, saying “Why do you differ with R. Eliezer? The halakha is in accordance with his opinion in every case!”

Still, the rabbis reject the position, telling God “It is written ‘It is not in heaven’” and that they “ do not regard a Divine Voice, as You already wrote at Mount Sinai, in the Torah: ‘After a majority to incline.’” And God laughs and smiles at the rejection.

That even God is not entitled to override a majority of constituents seems like an inherently democratic value. And yet, our voting system is based off of an Electoral College system that undervalues the popular vote and, theoretically, could have allowed more powerful and educated people — the electors — to override the majority rule. Not to mention the fact that the president and the Supreme Court (perhaps not equivalent to God, but not too far off) may override the majority opinion before we even know what it is.

But Judaism has always valued healthy disagreement over authoritarian rule. Everyone is equal. Everyone is entitled to an opinion, and the best way to solve a dispute is by discussing it and hearing everyone’s perspective.

Majority rule doesn’t preclude tyranny, of course — majorities have chosen wrong plenty of times. Sometimes it’s good to follow in Rabbi Eliezer’s footsteps and stand for what you think is true and right. But, when it comes to laws for governing society, the issue is bigger than any individual’s opinion, however educated. No one person’s truth can dominate — not even God’s. Let’s try to hold that to heart as we wait for the election results.

Mira Fox is a fellow at the Forward. Contact her at fox@forward.com or find her on Twitter @miraefox.

In Judaism, even God respects the vote