Trump aspired to be a master propagandist. This week, he failed. 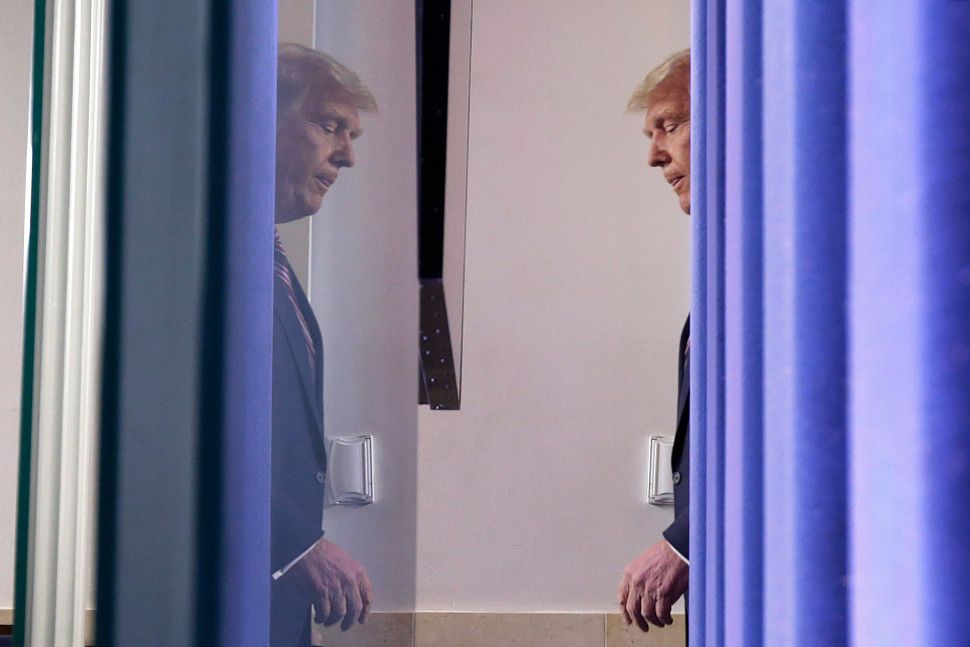 President Donald Trump arrives to speak in the briefing room at the White House on Nov. 5, 2020. Image by Chip Somodevilla/Getty Images

It’s not because Trump’s tweets, in the wake of his loss in the presidential race to former Vice President Joe Biden, are rife with disinformation about the integrity of the American electoral process. That was the case even long before election results began rolling in.

It’s because many of those tweets are hidden behind messages labeling them as potential sources of disinformation, a mark of Twitter’s aggressive new response to the president, who has treated the platform as his personal media outlet, free from the standards of more traditional publishers. As of Thursday, The New York Times reported that Twitter had hidden a full 38% of the president’s tweets since Election Day.

The social media giant’s change in tactics signaled that its doctrine of non-interference, which helped facilitate Trump’s win four years ago, is finally over. More quietly, it exposed a flaw in Trump’s increasingly autocratic approach to his office. While he might have an authoritarian’s instinct for propaganda, this week has seen him begin to lose his grip on the authoritarian’s primary tool: A seemingly unshakeable hold on the media.

Crucial to understanding why that’s the case, and why it’s so significant, is the history of how authoritarian propaganda has evolved in the internet age.

In the 20th century, authoritarian governments’ propaganda efforts were usually focused on state-controlled media. The Third Reich is perhaps the prime example of this old model: When the Nazis came into power, Germany had approximately 4,700 individual media outlets, about 3% of which were controlled by the Nazis. By the end of World War II, the country was down to around 1,100 outlets, some half of which the Nazis directly controlled, and the other half of which remained independent in name only, operating, according to the United States Holocaust Memorial Museum, under the strict guidlines of the Nazi Ministry of Propaganda .

With the rise of the internet, and especially social media, the 20th-century approach to propaganda became less reliable. While some authoritarian countries like North Korea and China have retained tight control over internet discourse, prohibiting or restricting platforms that might promote dissent and broadly censoring content, most modern strongmen have turned to a propaganda scheme that relies not on direct control of the media, but rather a monopoly on the media’s attention.

Social media has helped them. “It is easier to spread misinformation on social media than to correct it, and easier to inflame social divisions than to mend them,” Vox’s Zack Beauchamp wrote in 2019. Those two facts of the medium helped invent a new kind of state propaganda, in which authoritarians use social media to destabilize public trust in established sources of fact, thereby demanding that those sources devote extraordinary new resources to proving their own trustworthiness. What new authoritarians want, the academics Robert Orttung and Christopher Walker wrote in The Washington Post in 2014, is “‘effective media control’ — enough for them to convey their strength and puff up claims to legitimacy while undermining potential alternatives.”

The result: Widespread exhaustion and cynicism. Steve Bannon — whom Twitter banned permanently on Friday after he called for beheading government bureaucrats including Dr. Anthony Fauci — described this strategy in 2018 as “flooding the zone with shit.”

For much of his presidency — as well as during his first campaign for president — Trump proved remarkably effective at using social media to that end. In March 2016, when he began to emerge as the frontrunner for the Republican presidential nomination, The Times reported that he’d received the approximate equivalent of $2 billion in free press coverage since announcing his campaign in June 2015. The amount was exponentially higher than that afforded any of his opponents, and almost certainly correlated to the outrageousness of his presence on Twitter.

Since that time, Trump has honed a set of tactics to keep himself as the media’s primary focus, on his own terms.

He’s acted out in shocking ways to force focus away from potentially damaging stories, put the media on the defensive with a constant stream of frequently baseless criticism, arbitrarily denied access to major press operations and elevated outlets that primarily peddle conspiracy theories. He’s also consistently threatened the democratic freedoms that have historically enabled a robust and independent American press, threatening to weaken libel laws and attempting to restrict social media companies’ legal ability to censor disinformation. Notably, he tried to assert control over social media after Twitter first slapped warning notices on his tweets in May, during a prominent wave of Black Lives Matter protests.

In that context, Twitter’s recent actions take on additional meaning. Until this week, the number of Trump tweets to which the platform had attached warning labels could be counted on one hand. While some will argue that hiding Trump’s tweets doesn’t go far enough, and that those spreading disinformation should be removed entirely, what the platform has done has deprived Trump of his ability to flood the zone. Trump’s team appears to have registered the shift, and ceded ground.

“Interesting that [the] Trump campaign just emailed an all-caps ‘statement’ about voting to reporters rather than (so far) tweeting it, which probably would have gotten it flagged by Twitter,” the Times TV critic James Poniewozik wrote on Twitter, after the campaign sent out a press release on Nov. 5. “Did he assume he has better odds of distribution this way?”

More importantly, the mainstream media’s response to Trump has changed alongside Twitter’s. When the president gave a speech on Thursday about the pending election results filled with groundless claims of fraudulent voting and election theft, the three largest television networks, ABC, NBC and CBS, quickly cut away, a rare move for dominant stations that have frequently chosen to air Trump’s speeches, no matter how riddled with falsehood, in full.

“We have to interrupt here because the president made a number of false statements, including the notion that there has been fraudulent voting,” said Lester Holt of “NBC Nightly News,” after the channel cut off its feed of Trump’s speech. “There has been no evidence of that.”

And Fox News, the mainstream media outlet that’s historically been friendliest to Trump, took an uncharacteristically assertive role in calling favorable results for his Democratic challenger. While some of the network’s most famous personalities, like Sean Hannity and Tucker Carlson, have continued to uncritically repeat the president’s unsubstaniated claims that the election was rigged, many of its reporters have been newly rigorous about asking Trump’s allies to back his allegations up with hard evidence.

And at least one member of the Murdoch media empire, which controls Fox, has publicly said that the network’s attitude to Trump must now change. After CNN’s Jake Tapper said on air that the Murdochs owe the country a shift in approach, Kathryn Murdoch, who is married to Rupert Murdoch’s son James — one of the most prominent figures in the Murdoch hierarchy — tweeted his quote, with the comment “I agree with this.”

That doesn’t mean the outlook from here on in is rosy.

The propaganda apparatus Trump spent the last five-odd years building is far from destroyed. Protests this week by supporters repeating his claims of election fraud as fact show as much. As The Times reported on Nov. 5, “A disinformation push to subvert the election is well underway, and it is coming straight from President Trump and his allies. The goal: to somehow stop a Biden victory or, failing that, undermine his legitimacy before he can take office.” As Trump faces defeat, that effort could take any number of new routes. One increasingly popular theory holds that Trump might even create his own media empire to compete with Fox.

But for now, the system of propaganda that Trump created, which has until now served him well, is beginning to weaken. And it’s because the outlet that helped him create it has taken the first step toward bringing it down.

Trump aspired to be a master propagandist. This week, he failed.