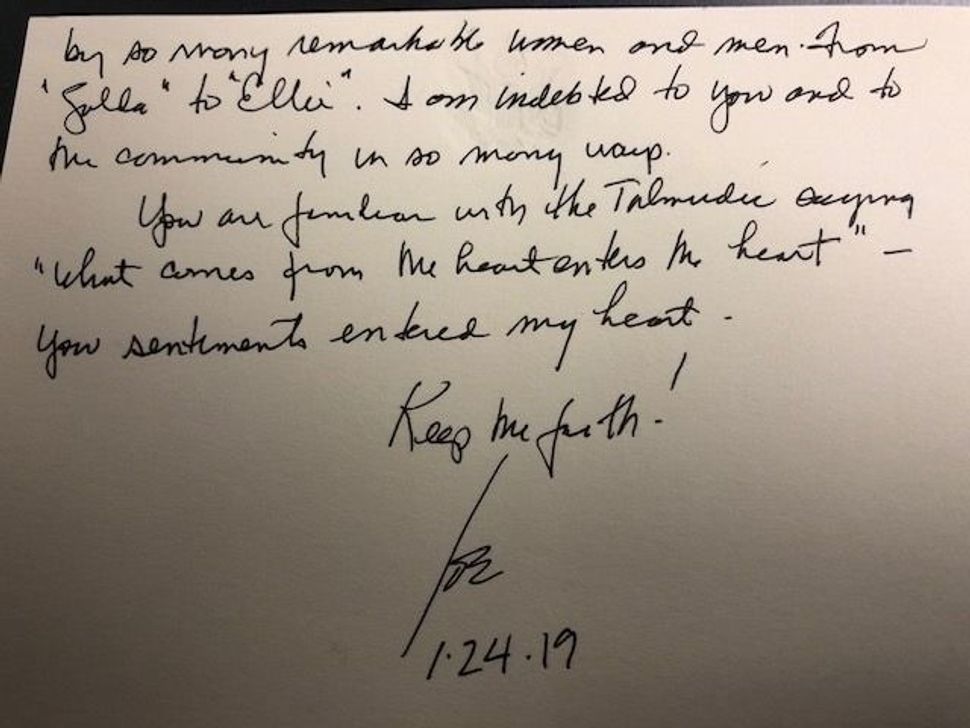 President Donald Trump has not conceded, and might not — weeks of lawsuits, tweet storms, calls for calm and general uncertainty loom between now and Inauguration Day. In the meantime, we invite you to immerse yourself in the Forward’s idea of what’s Jewish and essential about Biden from both our News and Opinion pages.

The most Jewish Biden story is about how he found his rabbi. A proud Catholic, met Rabbi Michael Beals at a shiva call in 2006, in Wilmington. Find the whole story here, but in a nutshell: An elderly woman named Sylvia Greenhouse had died, and Beals was presiding over a gathering of mourners. Biden was one them. Greenhouse had given him $18 — a number that in Judaism symbolizes life — during his first run for Senate in 1972, and in every subsequent race.

“And nobody was covering it, nobody from the press, there wasn’t an assistant,” Beals told the Forward. “It’s just who he is.”

It’s vignettes like this that make many American Jews feel like Biden is a mensch — well, that and the fact that Doug Emhoff, the Jewish husband of Kamala Harris, Biden’s running mate, has actually called him that.

One of the most widely read Forward articles about Biden was an Opinion piece, one that carried the headline “I worked for Joe Biden. Here’s what he really thinks about Israel.”

It resonated with Biden’s record, even going back to his time as Barack Obama’s vice-president, when he played the “good cop” to Obama’s bad one.

As the presidential nominee himself, Biden protected Israel from the left wing of the party, which is critical of Jewish state’s treatment of Palestinians. He even enshrined his opposition to the boycott, divestment and sanctions movement in the plank of the platform written for Arab Americans.

Critics on the right and the left

Of course, it’s important to recognize that at least a quarter of American Jews vote Republican, and many of them have embraced Trump. But Jewish Democratic majority is largely centrist, which makes Biden a good match for them.

Abe Silberstein, a Forward Opinion columnist, scoffed at the party platform as an outdated document that pandered to “old guard pro-Israel forces” capable of “punching well above their weight.” The platform was a strategic mistake, Silberstein wrote, that will only embolden Democratic critics of Israel.

Biden also took pains to differentiate himself from Trump on the subject of antisemitism. He opened and ended his campaign with full-throated calls to fight it.

Amid all the uncertainty, one thing is sure. At the very least, Biden maintained Jewish levels of support for the Democratic party, and he might have even raised them. One survey done right before the election by a progressive Jewish organization had Jewish support for Biden as high as 77%, which be an uptick after a dip in 2016, when Hillary Clinton was the Democratic nominee.