‘Kiss Julie for me’ — a story for my devoted aunt 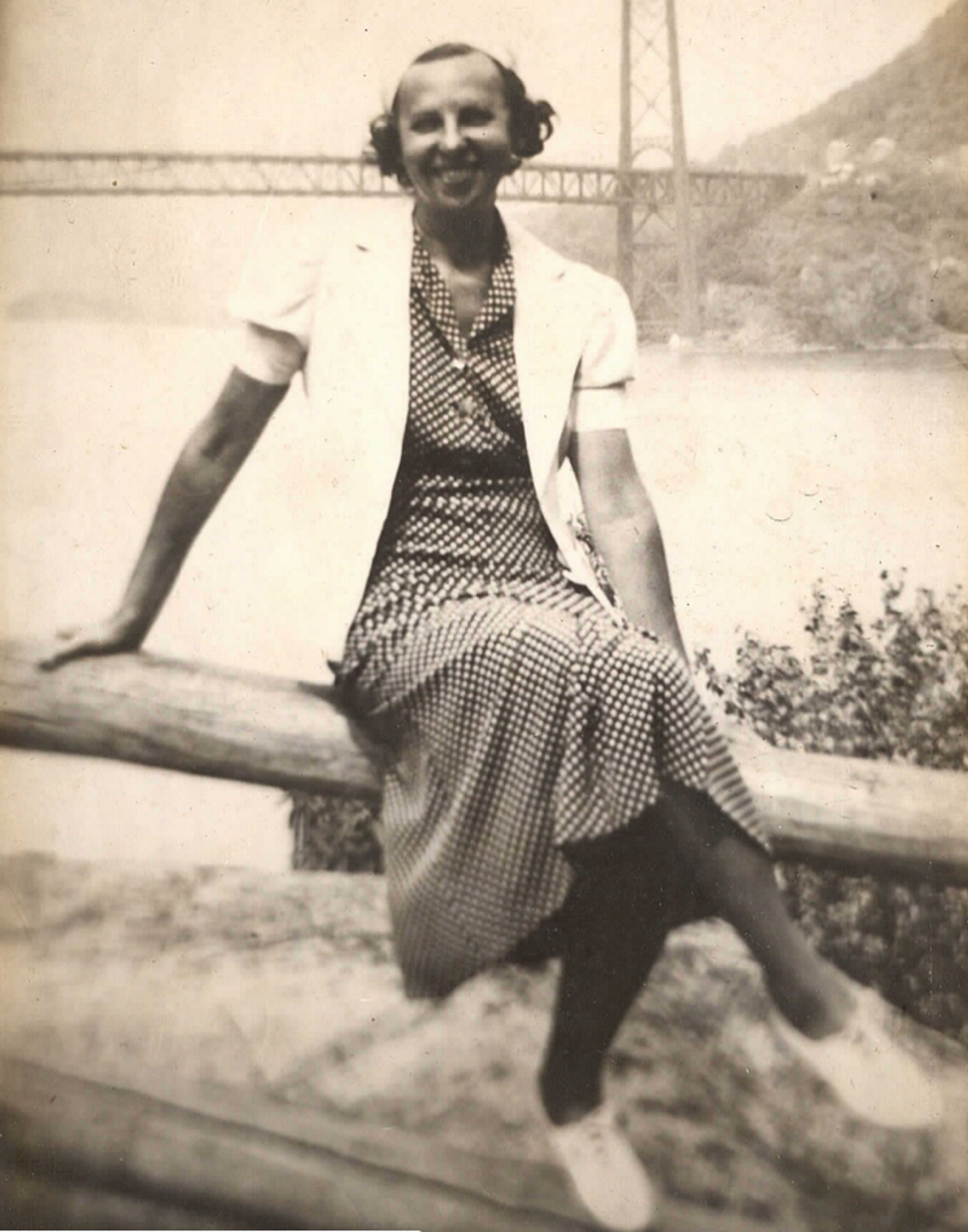 At least once a week at mealtime, I walk down the center aisle to visit Aunt Helen. She sits at the far end of the large dining room where walkers outnumber tables, where bibs and plastic replace napkins and stemware.

I look from side to side at the blank old faces that surround me — nod, half smile, full smile, “Hello, hello.” I know I’m creating pleasant moments, happy moments. Just saying hello can make someone’s day here. I wend my way across the dining room, a big smile on my face, as if to say how great it is to be visiting them, if only for seconds.

Some return sparks of a smile; awakening eyes begin to greet me. It feels good. I’m part of this home, just like Aunt Helen. Walking into the dining room to see Aunt Helen is no longer a simple matter. It’s taken on a life of its own, a prelude to a dinnertime visit.

I respond in kind.

Aunt Helen is stirred by the minor commotion. She looks up.

“LEONARD!” she exclaims, as though she hadn’t seen me since God knows when. “What are you doing here?”

“Aunt Helen, what do you think I’m doing here?” I say.

“You came to see me,” she says, half-dazed, coming back from wherever she was.

Suddenly, she smiles at me with unabashed joy. Nowhere else in the world do I get this response, and another visit begins.

It’s 1994, and about a year earlier, I brought my Aunt Helen to this nursing home in New Rochelle. She was 87 at the time and she just really couldn’t make it any longer, all alone in that dank three-room apartment in Borough Park, Brooklyn, where she lived all her life. She was frail, not eating properly; forgetfulness crept around her like an enveloping fog. It was time for this kind of a move.

All that’s in the past now — Brooklyn is but a faint memory — except for me, the only link to her past life. So I visit her, and without fail my visits bring a smile to her face and a laugh from her heart.

Aunt Helen was born Helen Arnstein in 1905. She was the youngest of three; Louis, her brother, was my uncle, and Gertrude, her sister, was my mother.

She was present at Israel Zion hospital in Borough Park, on the evening of Jan. 1, 1930, the day I was born. Without question she was my favorite aunt and I was her favorite nephew. We often referred to each other using the word “favorite.” She was the first woman credit manager of the Lane Bryant department store in Manhattan where she worked for many years until her retirement.

In 1942, my mother, who was dying of cancer, asked her sister to watch over me, her 12-year-old son. This became her mission in life. Her love for me was ever-present; I could count on it always. MISSION ACCOMPLISHED! She lived her entire life in Brooklyn until 1992 when she began to slip, both physically and mentally, to a point that she was no longer able to live alone.

The day she turned 89, I had the local bakery prepare one of their super-thick, real whipped-cream birthday cakes that need a Samson to lift and a waiter from La Cote Basque to present. I had thought about her birthday for days before the big event. Driving to the home, I played mind games with the cake that sat beside me. I knew I would go as far as my imagination would allow.

I arrived at lunchtime, and made my way to the dining room thinking about my entrance. Suddenly there I was, walking through the dining room during lunch, singing “Happy Birthday to You” at the top of my lungs, cake in my right hand, candle ablaze (like the statue of Liberty}. All eyes turned slowly toward me, attempting to comprehend this intrusion.

I arrived at Aunt Helen’s table, singing the last few notes on cue, as though I had rehearsed. She looked bewildered.

“Hi Aunt Helen. You know what today is?”

Very carefully, I lowered my arm, turned it and brought the cake in for a landing. All eyes were still on me.

“OK everybody, now let’s all sing ‘Happy Birthday’ to Aunt Helen,” I shouted, “and the people that sing the loudest will get the biggest pieces of birthday cake.”

They took me up on it. The singing was as resounding as it was off-key; the walls barely survived. My eyes searched Aunt Helen’s. She just sat there.

When the singing was over, the slow parade began. One by one, they made their way to the birthday table. As they arrived, each in turn wished her a happy birthday, some with deep sincerity and some just in it for the cake.

Aunt Helen thanked them for their good wishes, fighting back the tears. It was a glorious moment. I had choreographed a major unscheduled event.

The dining room at the home is set up with tables for four. For a while now there have been either one or two others at her table, always with a seat open for me. About four months ago, Manny appeared at her table. He’s a rotund, sweet, little man with a warm round face, a pleasing and gracious manner, a cared-for gray mustache, worry beads dancing in his left hand. To know Manny is to like him. I would love to have known him years ago.

Aunt Helen, at age 89, has a boyfriend — to my knowledge, her first. That they are the only two in the entire nursing home to have such a relationship makes them the talk of the town.

What goes on between them, as far as I know is as follows: He either seeks her out (or she him) and they take the long, silent, slow trip to the dining room, each one knowing, somewhere, that this could be their last meal. Most meals are taken in semi-silence. It’s hard enough for them to navigate the knives, forks, spoons, plates, bibs, napkins, trays; the arranging and rearranging of things; raising the fork, getting it to the mouth with the food intact.

It’s a full-time job. Doesn’t leave much time or energy for talking. Possibly a return trip to her room at days’ end, a spare kiss on the cheek, a goodnight. Another day passes.

When I’m there, I do most of the talking. Manny is quite sociable but can’t think of anything to say. One day I discovered, during a particular bout of questioning, that Manny has a daughter named Julie. What an opening!

“Guess what, Manny,” I said, with a big, broad smile on my face. “I have a daughter, too, whose name is Julie.”

“No kidding,” says Manny, also with a big smile revealing missing teeth in front that I noticed for the first time.

Well, all this Julie stuff was important somehow, to both of us. I, who was running out of material, found a whole new resource: “Julie lives in California. Julie wants to become an actress. Julie tends bar. JULIE’S GETTING MARRIED. Julie’s marrying this great guy. He’s Chinese.”

Manny’s sentences are never more than six or seven words, but his expressions always gets his point across.

His shrug says, “I don’t know what that is.”

“Sure! The Chinese invented squid long before the Greeks got to it. You know what, Manny? You and I have to go out for some squid real soon.”

From the next table I hear, “Real soon, yeah. You think he’ll ever take him? Just words.”

“OK. Where should we go? How about a Greek diner?”

“CHINESE!” says Aunt Helen with a look on her face akin to horror. “Can’t she get a Jewish guy?”

“You know, Aunt Helen, the fact is I never asked Dennis if he was Jewish. I think you can be Chinese and be Jewish.”

She made no response; I saw her confusion and moved along.

We exchange pictures. “Beautiful,” I say.

Every visit now begins with a Julie update. “How’s Julie?” I say.

“Well, let me tell you about my Julie, Manny. Guess what. JULIE’S GETTING MARRIED. SHE’S MARRYING THIS GREAT GUY. He’s Chinese.”

This has gone on, week in and week out now, for about three months.

What Manny has retained for sure is that he and I have something in common; we both have Julies and we both love them. Sometimes I think that he really doesn’t know which Julie belongs to whom any more. I think he thinks we’re family because we both have Julies. You know, I almost think so too.

I get up from the table, saying my goodbyes. Manny rises, extends his hand. “See you next time! Kiss Julie for me.”

“He’s your grandfather,” she said.

“If that’s so, Aunt Helen, then that makes Manny your father.”

She laughs. It doesn’t take much for me to make her laugh. When Aunt Helen dies, she’ll be the last one.It will be the end of an era for me. Although, if she goes first, I’ll still have Manny.

I kept seeing Helen until she no longer knew who I was and at that point I stopped the visits. It was too painful for me to see her in that condition and I didn’t think that she would benefit from further visits.

She was 89 years old when she died in the nursing home.

I loved her with the love of a son for a mother. I hope that my watch was as successful as hers. I will remember her and love her all the days of my life.

‘Kiss Julie for me’ — a story for my devoted aunt