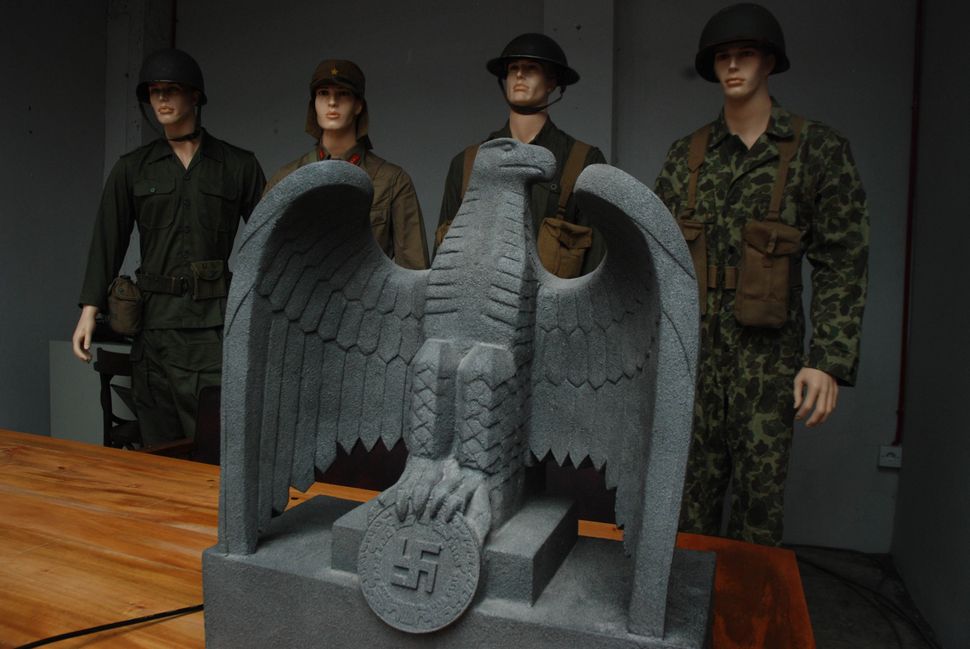 In recent months, Nazi memorabilia was stolen from several war museums in Denmark and the Netherlands. Thieves made off with mannequins dressed in Nazi uniforms, in one instance blocking off a major roadway and evading the police.

The latest in the string of thefts occurred on Nov. 3 at the Deutsches Museum Nordschleswig in Sønderborg, Denmark, Artnet reported. The thieves escaped with some 20 artifacts — including three mannequins, one in Hitler Youth attire and another in an SS uniform. Per Monopol magazine, the SS uniform is estimated to be worth around 200,000 kroner, or $31,400. The thieves, who remain unknown, may have been inspired by an earlier, more ambitious robbery at the Eyewitness Museum in Beek, in the Netherlands, where a group of burglars stole nine mannequins dressed in rare outfits on the night of Aug. 4.

That evening, thieves pried open the front gate of the museum and, an hour later, returned with a battering ram, forcing open the door and windows. In the course of five minutes, the group of perhaps 12 grabbed the mannequins, weapons, helmets and artifacts connected to a German parachutist before making their getaway. The New York Times reports that alarms sounded and the police arrived, but were held up by a series of tires the thieves laid out on the highway as a roadblock.

“The heart is out of the museum,” Wim Seelen, Eyewitness’ director, who started the museum from his own private collection, told Military Trader at the time. Seelen estimated the thieves stole some $1.5 million worth of memorabilia.

Following the Eyewitness heist, the Oorlogsmuseum in Ossendrecht, also in the Netherlands, was hit in October by thieves who stole 23 uniformed mannequins.

In response to the spate of thefts, Dutch museums have ratcheted up their security, The Times reported, with the Arnhem War Museum installing anti-tank barriers. Many smaller museums, like de Jonge’s, which operates out of his home, have taken their high-ticket items off display. The War Museum Overloon, fearing another robbery, returned two books it had on loan from the Netherlands Institute for War Documentation, including a “Book of the Dead” from Auschwitz, listing the names of 1,5000 Holocaust victims. Local police have yet to determine suspects, but authorities in Holland told The Times they believe the thefts were either commissioned by wealthy collectors in Russia or Eastern Europe or were committed by members of far right groups.

The Dutch police said the collector theory seems more plausible given far right supporters’ fondness for replicas. Collectors, on the other hand, are willing to pay up to six figures for authentic, rare or unique objects associated with the SS or Adolf Hitler. The curious culture of Nazi collectibles attracts wealthy buyers from across the world, and has even inspired a cottage industry of [counterfeit artifacts.] (https://forward.com/culture/434125/nazi-objects-argentina-fake-holocaust-museum-buenos-aires/)

Yet Seelen, who is committed to preserving the history of the war, during which time his native Holland was occupied by the Nazis, wasn’t confident the thieves would be able to put his stolen artifacts on the collectors’ market.

“Many of the stolen items are so unique that you cannot sell them,” Seelen told The Guardian in October. “Our world is a small one. As soon as something emerges from Beek or Ossendrecht, it will be immediately known.”