What I’ll miss if New York shuts down: sharing space with strangers 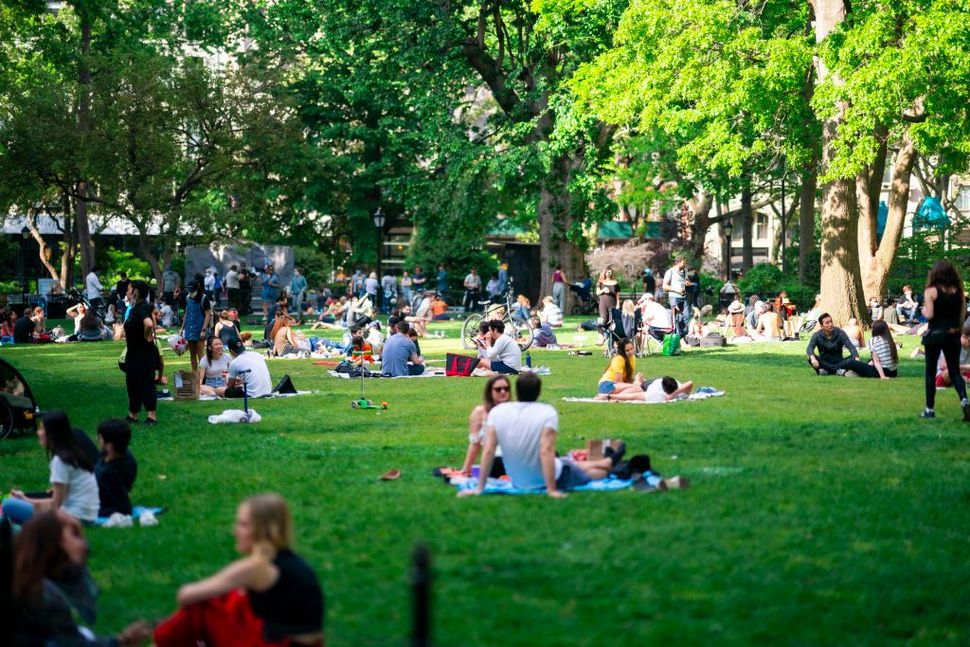 I learned Joe Biden was our president-elect when honks and shouts erupted outside my Manhattan window.

That morning, my partner and I made our way downstairs to investigate, joining dozens of people who had paused their Saturday routines to go outside and make noise. An elderly man was playing bagpipes on the corner. Others were banging pots and pans. A mother was FaceTiming with relatives, displaying the scene, while her two teenage sons tugged at her sweatshirt and said, “Mom, you’re being weird.”

Our neighbors were celebrating a Democratic victory, but they were also taking advantage of the opportunity to come together in public, something that feels especially satisfying in a year when there have been few happy reasons to gather. After months of receiving news through push alerts on my phone, it felt miraculous to hear this news from other, human voices.

When I went out for a walk a week later, on a gray Friday morning, the atmosphere was muted: Parents wrangled toddlers to school, and construction workers directed pedestrian traffic. Maybe the damp day was to blame. Or it might have been the fact that a coronavirus surge now seems imminent. With cases trending upward across the country, New York has imposed new restrictions on indoor dining and private gatherings, which will take effect tonight. Much worse, The New York Times reported that City Hall officials are starting to view public school closures as “a question of when, not if.” I don’t have children, and I haven’t eaten inside a restaurant since March, but as I walked I thought about the habits I’ll probably drop: Walks around the Central Park reservoir, where panting runners abound. Morning coffee at the park near my apartment. Nonessential trips to the drugstore.

These are small sacrifices, which I will happily make for fewer infections this winter. But the news is a gloomy indicator that the pandemic may once again press pause on what, to me, is the single most rewarding part of living in a city: sharing public space, however distantly, with strangers.

Before moving to New York I was, to use the most annoying possible term, a digital nomad. After college I spent a year backpacking while working a variety of freelance gigs from my laptop. Sometimes, I visited friends or found temporary jobs in tourist hostels. Mostly, I was completely alone in a series of foreign cities. Though it was the most solitary year of my life, I rarely felt lonely or homesick, because I was constantly around other people: sharing candy on long train rides, puzzling together over timetables, silently gazing at the same frescoes. Simply by sitting in public squares where other people were sitting or ordering espressos next to other people ordering espressos, I could slot myself into a larger, reassuring human routine.

At the end of that year, I congratulated myself on being so independent and self-reliant. I didn’t realize exactly how much I had counted on the sustaining presence of other people until the beginning of the pandemic, when I spent some time at my parents’ house in suburban New Jersey. There, I often went days without laying eyes on anyone outside my immediate family. And although they were the people I most wanted to be with, I felt cut off from human experience in a way I hadn’t when I was alone in more tangible ways.

Little about my pandemic-era routine changed when I returned to the city: I still work from my bedroom and spend weekend nights slogging through New Yorker-recommended movies. But I’ve been insanely, disproportionately comforted by taking afternoon walks among other afternoon walkers, confirming with my own eyes that others are engaged in the same quotidian routines as I am. Though I couldn’t spend election night with friends or at a bar, I could see televisions flashing in apartments across the street. It’s those luxuries, rather than any theoretical inner strength, that have made the difference between being alone and feeling lonely.

I can’t say I rue the loss of indoor dining, which entails high risks for restaurant workers and has correlated with spikes in coronavirus cases. But as temperatures drop and it becomes safer to stay inside, I will miss being close(ish) to other people — something I began to truly appreciate only this summer.

On my morning walk, I saw a man emerge from an upscale restaurant, ferrying a tray of cappuccinos to a pair of cars idling near the curb. The restaurant was not yet open, and he was wearing street clothes; it seemed that he was serving friends or fellow staff, not patrons. At each car, without touching anything but the tray, he proffered the china cups and a glass bowl of sugar packets. There was such grace in that gesture, an act of service we’ve all performed or received, modified for this unexpected era.

The drivers rolled up their windows and removed their masks. Separated, yet united in the same morning ritual, they took their first sips.

What I’ll miss if New York shuts down: sharing space with strangers