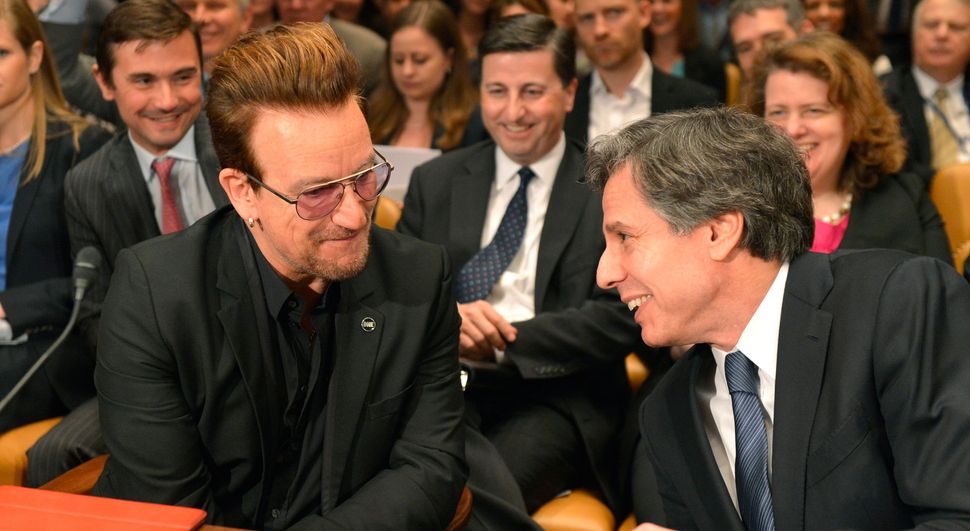 It is all but certain that Antony Blinken, former U.S. deputy secretary of state under Barack Obama, will be the nation’s top diplomat in the Biden administration. If nominated, he will be the third Jew to hold the post after Henry Kissinger and Madeleine Albright. He will — we think — be the first to have a Spotify account with a diptych of mediocre rock songs.

Before his nomination, eagle-eyed Twitter users espied the neck of a Martin guitar in the background of Blinken’s October TV interview with Fareed Zakaria. Blinken confirmed that he plays a bit, and soon people clocked that his Twitter bio directed them to follow him on Spotify at, wait for it, “Ablinken.”

It’s a clever enough name, and given that Blinken’s poised to head up international relations of the U.S. and that he — however playfully — likened his musical persona to Abraham Lincoln, we thought it only fair to appraise the tracks based on what they say about his philosophy of leadership.

We begin with the single “Patience,” a virtue for any good diplomat. The mellow, guitar-forward song feels like it might have had some minor radio success in the heyday of The Crash Test Dummies or The Wallflowers. As the title implies, the wait for the hook is interminable.

“Patience” is a pretty standard love song about waiting for love to be reciprocated and Blinken’s soft, somewhat froggy baritone, is every inch the lovelorn sop. Still, if one takes its lyrics and applies them to affairs of state, the ballad appears to hold a prudent diplomatic strategy.

“Patience is a-talkin’ till I’m blue, when all I want — I want to unfold you,” Blinken croons.

Surely, Blinken is really singing about the task of managing precarious relations between nations. The fact that he is resisting rushing headlong into any kind of direct action here is heartening, given Trump and current Secretary of State Mike Pompeo’s tendency to race into unproductive talks and broker deals with bad actors.

While Blinken may be tempted to be more forceful — indicating that he is capable of such a showing if necessary — he recognizes, “Patience is the test of life itself/And to fail would be suicidal.” That’s a good thing to remember when walking up to the table with China or North Korea. Negotiations take time, and failing to understand that poses an existential threat.

The second tune, “Lip Service,” which one wag compared to Blue Oyster Cult and Alan Parsons — and to which I’ll add an infelicitous resonance with the Steve Miller Band — speaks to another side of statecraft. Once again this is a tale of unrequited love and holding baser instincts at bay. This time, there are synthesizers and vocal filters and what sound like maracas.

More pugnacious than “Patience,” Blinken sings about how he and his love interest are a good match — even if this person doesn’t know that yet. In doing so, he reveals the paramount importance of persuasion to his future post. (It’s a desirable quality for the job, of course. It’s kinda creepy on a romantic level given this other person’s stated desire to “just be friends.”)

“I want to convince you/This is a powerful fight, yeah,” Blinken sings, indicating a desire to win over allies. At the same time, he acknowledges the need to avoid being too forthcoming or, God forbid, reveal state secrets in the process.

“I know it’s a mistake to open my heart,” Blinken sings, “Make things too easy, shed light on the dark.”

All that said, as this number gives way to a guitar solo jam section, Blinken admits that he and ABlinken — like Abe Lincoln — can still be vulnerable to passion and risk giving up the game: “I wanna challenge/But I’m ready to surrender.”

What the speaker of the song ultimately does remains ambiguous. But then, perhaps this admission of defeat is itself lip service — a feint or gesture at exasperation to get what he really wants.

Blinken’s Spotify discography is limited, so it’s admittedly difficult to glean the full scope of his plans and tactics for repairing the many rifts his predecessor made with our closest partners. But we do know he has one likely weapon in his arsenal: An EP he might deliver at any moment to America’s enemies.