Thanksgiving in the time of COVID: How we’re safely celebrating and showing gratitude 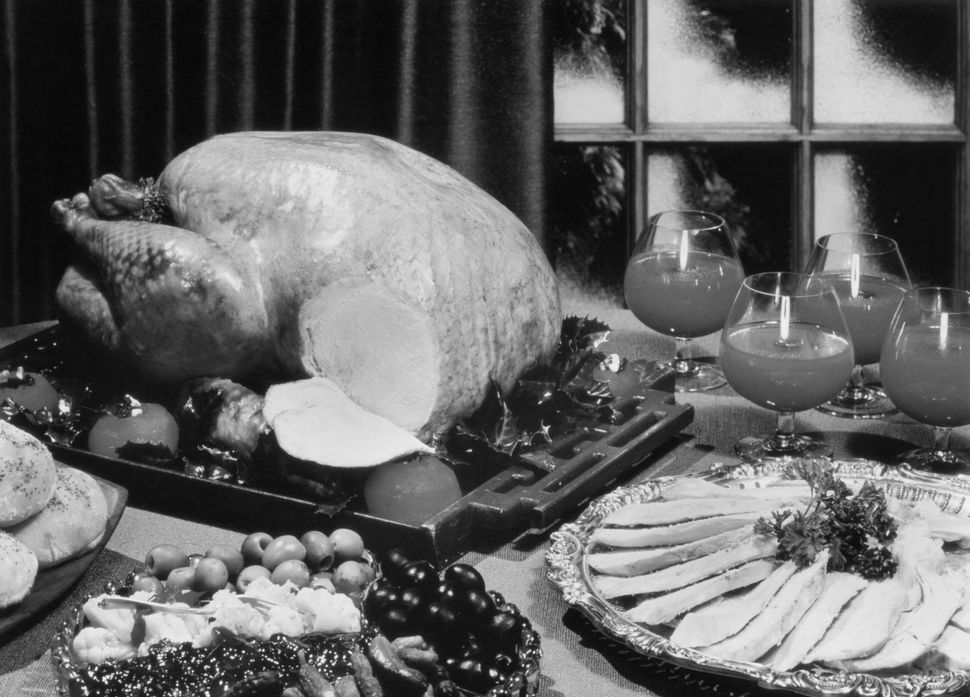 It’s going to be a Thanksgiving like none other.

The United States is in the grips of the worst spike in the COVID-19 pandemic to date, imbuing every decision around the holiday with new concerns — especially as public health experts have warned that Thanksgiving gatherings will only lead to an even more dramatic uptick in cases.

It’s human nature to turn to ritual in times of strife, and with the ordinary traditions — warm family gatherings, get-togethers with old friends — out of reach, our staff, like the rest of the country, has had to get creative. From ordering dim sum to turning a too-large turkey into tacos, here’s how we’re making the most out of these painful circumstances.

I have never been a big fan of turkey — when we were kids, we did restaurant Thanksgivings a few times and I always got prime rib. So I’m taking this pandemic as an excuse to avoid the traditional menu entirely. We’re going to get takeout dim sum because it’s about the farthest thing I can think of from the typical holiday smorgasbord.

Normally, we’d be at my sister’s in Chicago, and my dad would be bringing out a new delicious nosh every half-hour or so throughout the afternoon. So in homage to him, I’m going to also make what we’ve come to call “meat bombs” — mini hot dogs wrapped in pastrami. That’s deli dim sum in my book.

Oh, and we’re doing a pie exchange with family friends. They’re making pumpkin and pecan, we’ll do chocolate pie and apple pie, and we’ll all get together for a tasting around our firepit in the afternoon. Yum.

For the past several years, the plus-sized bourbon pecan pie I make each Thanksgiving has had two great benefits. One: It is perfect. It is my dessert muse. When I take the first bite, my eyesight goes blurry. Two: There are few better methods besides bringing this pie to quickly ingratiate myself with whoever my hosts are — for example, my girlfriend’s extended family. This year, the pie will serve a third purpose: security blanket. It’s going to be a weird Thanksgiving, and what better way to sublimate my existential dread than by inlaying perfect concentric circles of pecan halves on the top layer of the pie? What better way to experience temporary oblivion, in a good way, than by eating a heaving slice of said paradisical pie? Anyways, here’s the recipe.

For the first time ever, I’ll be making one of those marshmallow covered sweet-potato mains that are really desserts. I’m using Chef Milly Peartree’s recipe, that’s so traditional and heymish that my American-by-choice self might finally feel really American. We’ll see. I keep on making “Grandma Geri’s” stuffing, courtesy of an ex-lover, because it wouldn’t be a Lesbian celebration without something ex in it. Perhaps you know that banner we marched under for years: “An army of ex-lovers cannot fail?” Well, for sure not when they’ve had that matzo meal-based stuffing.

For my wife Myra and me, as for so many of us, it’s a holiday of yortsayt, memorials. There’s Uncle Aaron last Friday, Myra’s sister Elizabeth this past Monday and my father today. It’s a veritable candle factory on our kitchen table, as the formica (vintage!) reflects the candle flame evoking them and a sense of mishpokhe, family, that remains despite the loss of their physical presence. Chef Peartree survived the loss of her much beloved restaurant, regrouped and has been feeding essential workers and the hungry. That’s gratitude. And that’s mishpokhe.

Due to COVID, I won’t be inviting the standard 18-20 members of my extended family, but it will still be fun because my three sons, daughters-in-law and three grandchildren (all under four years old) will be here.

To keep our young guests from getting cranky, we’re moving dinner from our traditional 5 p.m. evening slot to 2 p.m., meaning we’ll have our Thanksgiving Day feast in broad daylight, something I’ve never experienced before.

I’m grateful that I can spend the holiday with my children and grandchildren, when so many of my friends can’t be with their grandchildren at this time.

The Grisar clan is very thankful this year for the recent addition of an entirely unproblematic family member. She is 11 months old, has no political opinions to speak of, and while she regularly violates social distancing protocol, she is too young to wear a mask anyway. She has yet to complain about a meal or make passive aggressive remarks of any kind. But perhaps her greatest blessing is that we are all so busy cooing over her that any subject that might lead to intrafamilial sniping never even gets going. Come future Thanksgivings, we hope she will have mastered the fine art of getting more food inside of her than on her person.

Our Thanksgiving guest list evaporated faster than drippings in a hot oven. First there were 16 guests, then 10, now it looks like six. Meanwhile I pre-ordered a turkey to feed the original pre-lockdown list, a 17-pounder that will look cartoonishly enormous when it comes to the table. There will be leftovers.

So I’m looking forward to Friday’s Turkey Street Tacos: Heat some oil in a skillet, add finely chopped turkey and skin, sprinkle on some cumin, chile powder, a squeeze of citrus and enough beer, tequila and/or water to moisten. Heat through. Spoon onto warm corn tortillas, top with slices of radish, avocado, chopped onion, cilantro and some hot sauce — maybe even a dab of cranberry sauce. Because that will be leftover too.

I’ll be spending Thanksgiving in Brooklyn with my roommate, Tashween, who is family in all but name. We’ll be cooking much more food than two people could ever reasonably eat — including my favorite non-traditional Thanksgiving dessert, this bittersweet chocolate and pear cake from Smitten Kitchen — doing puzzles at night, cozily reading on our couch in the morning and spending lots of time video chatting with her baby nephew, who has the best little cackle on earth. Over the long weekend, I’ll also have a Zoom meal or two with my family in Denver, including my soon-to-be sister-in-law, a 2020 addition for whom we’re all deeply grateful. So, it’s a year for new family traditions with new family members — whether I’m technically related to them, or not.

It’s just me, my mom and my dad this year, but we are participating in a food share with some members of our extended family. Each house is responsible for part of the meal, and we are going to drive around and pick up the food from their houses to eat at ours. My sister, Melissa, who lives in New Orleans, is not making the trip this year, but we reminisced earlier this week about messily dry-brining our family turkey the night before Thanksgiving a couple of years ago after coming home late from a night out. A night and a Thanksgiving with my far-flung sister both feel like relics from the distant past.

I’m excited to cook Thanksgiving because I’ve never done it before. I can make it a project, a test of skill — which distracts me from my sadness at not being able to join my extended family in Maryland, as I have every year of my life until this one.

Comparing the two meals on a strictly culinary basis, I think I’m making one improvement, but I’ve also got a disadvantage. Dark meat is better — that’s just a fact — and so I’m doing mostly drumsticks and legs. On the other hand, my Aunt Jane’s “Big Fat Jewish Turkey,” as it’s called in the family cookbook, requires many hours of basting with butter. I can’t help but think I will taste the difference in my kosher version, and not for the better. The butter, of course, being symbolic of the bigger problem of not being there.

Thanksgiving is my favorite holiday, and I think a lot of that has to do with my being Jewish. Unlike the “holiday cheer” that follows, Thanksgiving is thoroughly secular, but still includes the ritual of gathering with intention that America’s other civic holidays, like the Fourth of July, lack. I also love sweet potato, cranberry sauce and pumpkin pie. This is all to say that I’m Thanksgiving’s number one fan, save for its genocidal origins.

And yet, I’m fine not being able to travel from Washington, D.C. to see my family in San Francisco this year to celebrate it. I missed the holiday while attending college in Canada and South Africa — South Africa because the flight was too long, and Canada because they celebrate their off-brand Thanksgiving on a random day in October. I’m quite content with my new November tradition of tucking into Wawa’s Gobbler bowls and hoagies. As far as I’m concerned, these gas station mashups of all my favorite Thanksgiving foods can go toe-to-toe with any five-course Turkey Day dinner.

With every year that passes, I am grateful for my grandfather’s health. But this year — his 96th! — I’m particularly relieved that he will be able to join my family for an outside, socially-distanced Thanksgiving dinner. He’s spent the majority of 2020 confined to his small room in an independent living home, anxiously waiting for the pandemic to end so he can go back to seeing his family and friends, and return to his weekly pool workouts at the YMCA. Although we’re not there yet, I’m looking forward to seeing him enjoy a homemade chocolate dessert (his favorite), served with extra whipped cream (not optional).

Thanksgiving is a really big holiday in my family: it and the Passover Seders are equals as the two times when my whole extended family, including cousins, aunts, uncles and grandparents, all get together. On Thanksgiving Day two years ago, It became an even bigger day for us, when our family was extended by another generation with the birth of my grandmother’s first great-grandchild.

It’s an understatement to say I’m bummed about missing it this year, even though we have a Zoom call planned between all of our households. I’m currently living in Turkey, and while it’s not my first Thanksgiving experience as a stranger in a strange land, every time I’ve been in this situation I try to do — or at least eat — something special to mark the occasion.

I love Thanksgiving food, but it may surprise many to hear that turkey is not so accessible in Turkey… or at least not from Istanbul’s impressive number of kosher butchers. Let’s be real though, Thanksgiving is all about the sides, so I’ll be making stuffing. Nonetheless, I thought I should still have some American cuisine for the main course, so I’m planning to make burnt ends glazed in a homemade cola brown sugar barbecue sauce.

I’m not hosting anyone, so I would tell you that there will be leftovers to feed me through the weekend — but who am I trying to lie to?

Thanksgiving in the time of COVID: How we’re safely celebrating and showing gratitude