How Alison Lurie inherited her Jewish sense of social consciousness 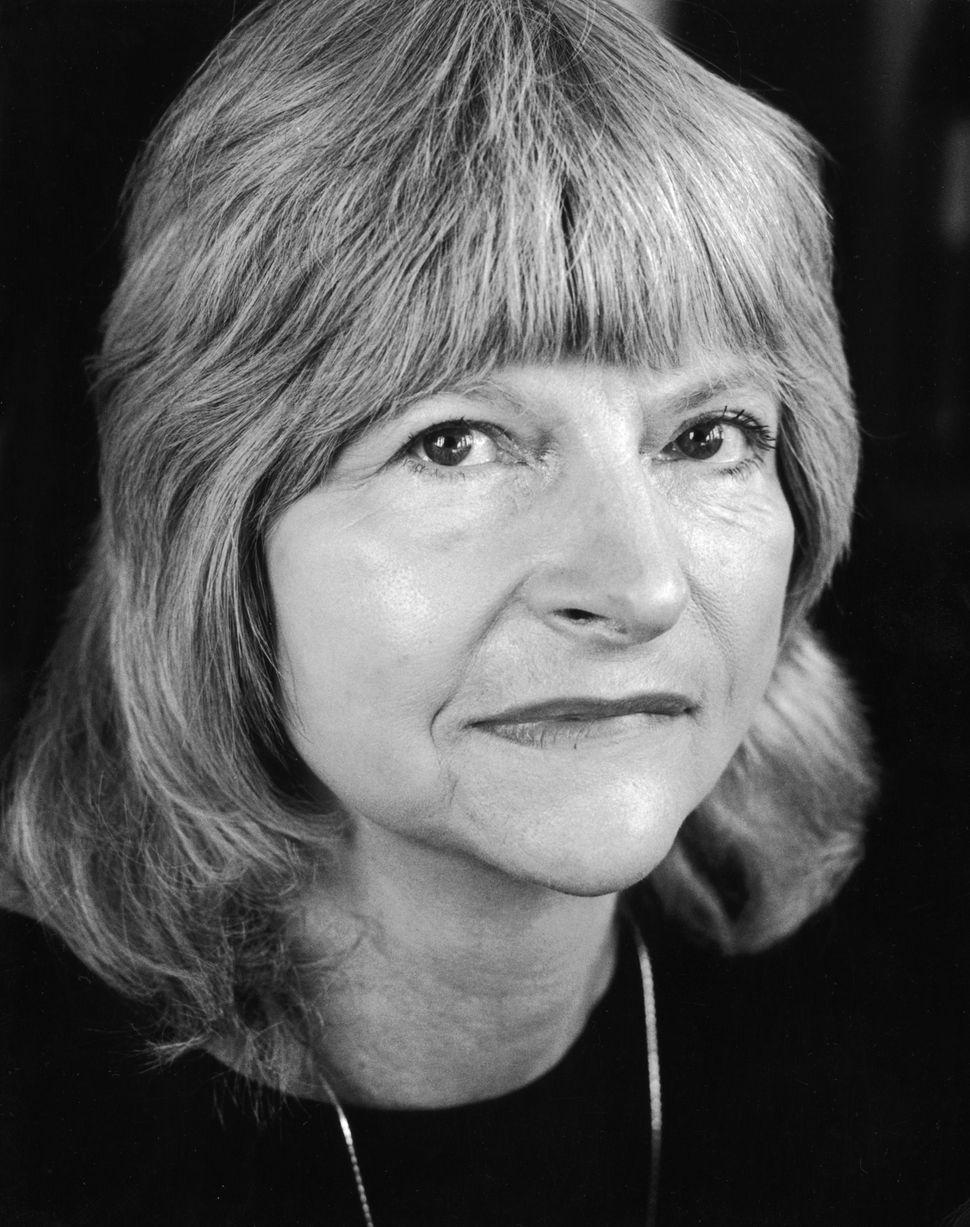 The writer Alison Lurie, who died on Dec. 3 at age 94, proved that an inherited Jewish sense of social consciousness can inspire a literary career.

Author of the celebrated novels “The War Between the Tates” and “Foreign Affairs,” Lurie was the daughter of Harry Lurie (1892-1973), a Latvian-born sociologist and expert in Jewish social welfare, who served as First Executive Director of the National Council of Jewish Federations and Welfare Funds, (today’s Jewish Federations of North America.)

As his daughter told the Social Service Review in September 1987, “My father’s family left Latvia for America for a combination of economic and political reasons, hoping to exchange poverty and persecution for opportunity and freedom and equality, like so many other immigrants of the time.”

A prolific writer, in 1961 Harry Lurie published “A Heritage Affirmed: The Jewish Federation Movement in America.”

A forthright critic of social workers who saw themselves as Freudian therapists, Harry Lurie insisted that social conditions must be considered in dealing with crises experienced by society’s downtrodden.

His daughter Alison maintained a comparable awareness of social surroundings in her novels and her appreciation of the arts. During a March 1985 appearance on the BBC Radio program “Desert Island Discs” in which celebrities choose favorite recordings, she justified the inclusion of an aria from Act II of Mozart’s “Marriage of Figaro” in which a servant asks women to appreciate his emotional capacity for love.

Despite her reputation as a novelist of manners who often dealt with love affairs gone awry, Lurie told the BBC host that she selected the aria “because Mozart’s concern in this opera is much like what I’m trying to do in my novels; I’m trying to write about society, about love, both in its comic and its tragic side, and trying to give a picture of an entire world, even though a limited one.”

This consciousness of the outside world in addition to internal emotions of her characters, made Lurie’s novels singularly perceptive. At a time when American Jewish novelists chose university professors as protagonists, among them Saul Bellow’s “Herzog,” Philip Roth’s “Professor of Desire,” and Joseph Heller’s “Good as Gold,” Lurie presented an atypical feminist perspective in “The War Between the Tates.”

She specifically followed in the footsteps of Bellow and Roth by depicting sociologists in her novels. In “Imaginary Friends” (1967) Lurie has one social scientist confess candidly, “We think we’re exempt from ordinary moral law too: when we mess around with people’s lives, either we aren’t really doing it, or it somehow doesn’t count.”

One of Lurie’s Jewish sociologists, Roger Zimmern, reflects that rather than intervening when troubles arise, as a researcher he must remain a “detached, intelligent scientific observer… I remembered that I was supposed to be a sociologist, and began looking for my notebook.”

Outlining the conflict between being an accurate witness and a mensch who helps people, Lurie gently lampooned social scientists who proclaim, “Well, studies show 74 percent of marriages to crying non-Jewish girls end in divorce.” Yet her books retain an essential fondness for these characters.

Indeed, Roger Zimmern and other members of his family feature elsewhere in Lurie’s fiction, as does his cousin, Leonard Zimmern, a waspish literary critic, in “Real People” (1969) and “The Last Resort” (1998).

Clearly Lurie enjoyed populating a society full of characters with whom she found affinities, to see how they led their lives. The result is an American Jewish family considerably less affected than J.D. Salinger’s over-precious Glass clan.

Yet despite the tenderness expressed in her fiction, not every reader was won over. In an essay, Joseph Epstein recounts how the American Jewish sociologist Edward Shils, who motivated Saul Bellow to create the title character in “Mr. Sammler’s Planet,” Professor Durnwald in “Humboldt’s Gift,” and Rakhmiel Kogon in “Ravelstein,” disparaged Lurie’s work.

According to Epstein, Shils dismissed Lurie’s novels as merely dealing with hanky-panky on university campuses, after having reading only one and feeling that “he didn’t need to read any more of them.” This was especially unfortunate since according to the Israeli sociologist S. N. Eisenstadt, Shils became involved with social science through literature, much like Lurie herself had.

Lurie’s need to reconstruct a social world may have had its roots in a paradisiacal early educational experience. Born in Chicago, Lurie soon moved East with her family, and she attended the Cherry Lawn School in Darien, Connecticut, graduating in the 1940s.

At the time, half of the school’s students were Jewish, with many European refugees among them, including Henry Rosovsky an economic historian who served as Acting President of Harvard University. Another classmate at the Cherry Lawn School was Elie Shneour later a neurochemist and biophysicist.

Surrounded by this brilliant early nurturing ground, it is unsurprising that Lurie retained a lifelong interest in literature for children and folktales.

Also captivated by the troubled complexities of adulthood, Lurie first made an impact in the publishing world when she wrote a remembrance of an irascible friend, Violet “Bunny” Lang, who died young after defying her anti-Semitic Boston family by carrying on a love affair with a Jewish painter.

Lang’s paramour was Michael Goldberg, an abstract expressionist colleague of Lee Krasner, Mark Rothko, and others.

Lurie’s other literary loyalties are expressed in her cogent criticism in which she suggests that the American Jewish children’s book author and illustrator Maurice Sendak was more “gifted” than Edward Lear.

She found another kindred spirit in Cathleen Schine, author of “The Three Weissmanns of Westport,” likened by some reviewers to a “modern-day Jewish Jane Austen.”

Other writers admired by Lurie ranged from Hannah Arendt and Doris Lessing to the critic Leslie Fiedler and fantasy author Jane Yolen.

Preoccupied like Lurie with the meaning and surrounding worlds of children’s stories and folktales, Yolen is the daughter of a psychiatric social worker, possibly indicating some subliminal affinities. Yolen was drawn to fairy tales specifically because few of the heroines “were – like [her] – Jewish.” As Lurie did, she would reclaim and reshape folklore to empower young women.

Lurie was also a clear-eyed opponent of villainy and the exploitation of workers, signing a petition in 1989 to boycott publications by Pergamon Press, a company owned by Robert Maxwell, after unionized workers had been fired.

Earlier, in 1983, Lurie had signed a petition supporting Irina Ratushinskaya, a Ukrainian poet who had been arrested in the USSR. Asked by the KGB to serve on a university entrance exam committee and deliberately score Jewish applicants below the acceptance level, Ratushinskaya refused, leading to many personal travails.

Lurie was ever-aware of the matchless value of social empathy, and prized those who behaved in heroic fashion to defend their ideals. Her novels reflecting a Jewish familial tradition of insight into society’s oppressions will surely continue to attract readers.

How Alison Lurie inherited her Jewish sense of social consciousness