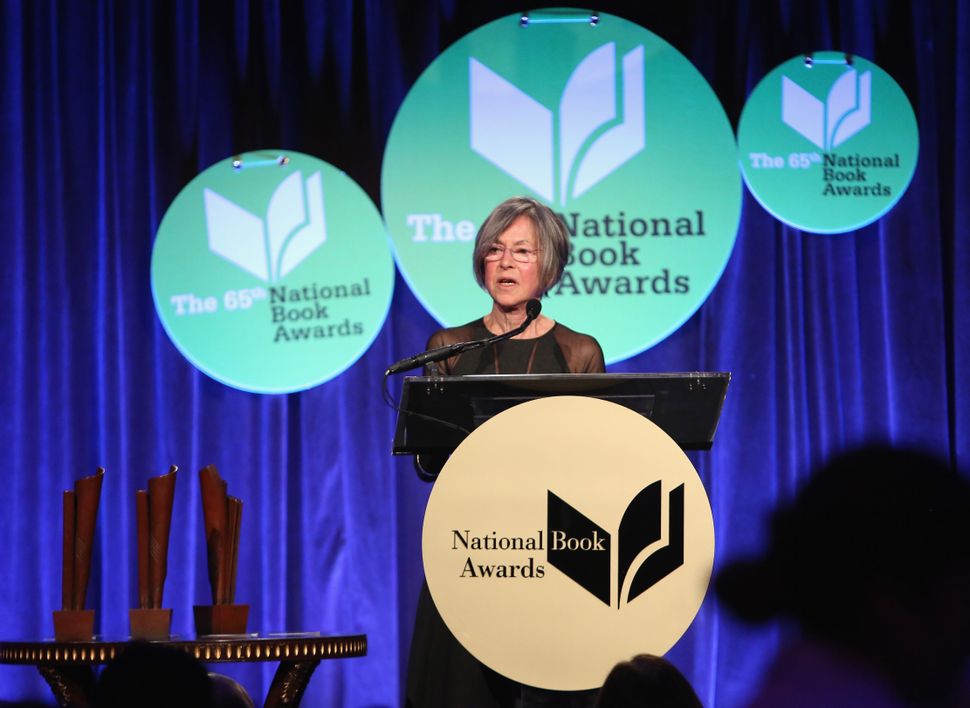 On Dec. 7, newly-minted laureate Louise Glück delivered her Nobel acceptance speech outside of her Massachusetts home. In it, the poet expressed her lifelong interest in a kind of confessional poem, in which the speaker intimately addresses the reader. And in making her point, she lauded a work many found tone-deaf in the current climate, prompting some to compare the speech to blackface.

Glück built her speech around a childhood competition she held for the greatest poem in the world.

The decision to invoke these poems, one written by a white abolitionist in the voice of a Black boy who was enslaved, the other a song by a writer whose work was a staple of minstrel shows, was questioned by many voices on Twitter. Among them was the poet Mary Karr, for whom Glück served as a thesis adviser, who said Glück wrote “a minstrel show Nobel speech.”

At this point in history, Louise Gluck—my grad thesis advisor & a poet I deeply admire—wrote a minstel show Nobel speech. In 1789, Blake’s ‘Black Boy’ might have passed as ‘abolitionist’, but it came out of a shoe-polished white face. Wake TF up. #NobelPrize #LouiseGluck https://t.co/dXoZNASYoM

In Glück’s analysis of “The Little Black Boy” — which won her competition for best poem — she said that Blake served as “the hidden origin” of the boy’s voice, an aside that critics of the speech compared to blackface. She went on to note how the boy’s “provisional mortal body contained a soul of luminous purity,” and a desire to “protect the more fragile white child from the sudden surfeit of light.”

Poet Li Yin Alvarado tweeted that Glück’s speech, by “elevating a poem — however abolitionist in intent — that is rooted in upholding white supremacy, understandably, I think, turns off readers for whom fighting against said supremacy is a not some literary or intellectual exercise, but an actual matter of survival.”

Many noted that Glück, even if she meant to make a timely point about racism, might have used the words of an actual person of color, and not the caricature of a Black person as imagined by a white man.

There was no reason to speak about the “little Black boy”conjured up by the mind of Blake. Any other poem could have stood in.

It is violence when one chooses, still, to recommend and elevate a white man’s caricature over any other Black man or womxn’s genius.

Others, like Twitter user Sanjay Varma, believed that Glück’s critics missed a central insight in the speech — that the hope of the titular “Black Boy” in finding acceptance in what Glück called “the perfect world he had been promised after death” is in fact “not a realistic hope.” In other words, Blake as a writer understood that the realities of the character heenvisioned were bleaker than he allowed the speaker of the poem to accept, drawing empathy in the listener and reader, a choice Glück called “heartbreaking” and “deeply political.”

2/ “…The hurt and righteous anger the little black boy cannot allow himself to feel, that his mother tries to shield him from, is felt by the reader or listener.”

Before Glück’s Nobel Literature win earlier this year, the category was beset by scandal. In 2019, the novelist Peter Handke was a controversial recipient because of his friendly association with the late Serbian President late Slobodan Milošević, who oversaw the government that conducted the Bosnian Genocide. Many believed Glück to be an uncontroversial winner, but her remarks had some wondering if she was the best choice for this moment.

So Louise Gluck has a Nobel Prize, but Komunyakaa doesn’t? Gluck her, her blackface bullshit, and her weird need to discuss Stephen Foster (and Blake’s “Black Boy”) at her Nobel lecture.