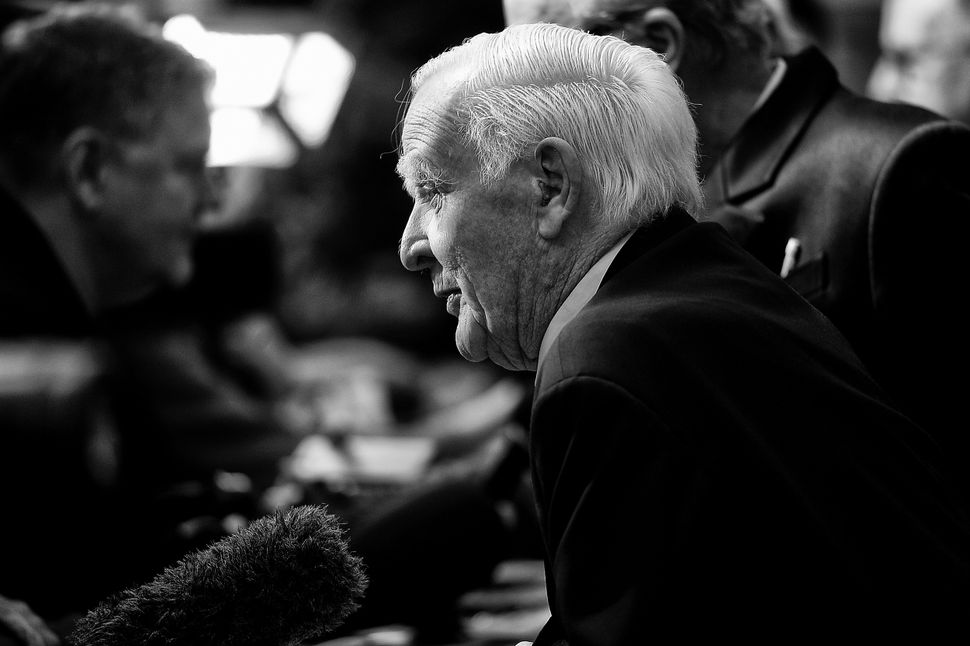 John le Carré, the prolific espionage author and former MI5 spy, died Saturday Dec. 12 at the age of 89. His bibliography of nearly 60 years long outlived its major subject — the Cold War — and expanded to explore geopolitical conflicts that have yet to be resolved. In 1983, he turned his attention to Israel.

In “The Little Drummer Girl,” le Carré (his given name was David Cornwall) imagined an Israeli spy grooming a young Brit to infiltrate a Palestinian cell. The book and its film and miniseries adaptations could be read as appealing to the United Kingdom’s own tortuous history with Israel, from the Balfour Declaration to the pre-state skirmishes between the Zionist underground and British troops to current rows in the Labour Party. In short: It’s complicated, and so were le Carré’s thoughts on Jews.

“I knew nothing of the Middle East, but then I have always seen my novels as opportunities for self-education,” le Carré told the Jewish World Review in 1998 of his research for the novel. “Investing my ignorance in my central character — a leftist English actress — and making a virtue of her naivety, I set off on a journey of self-enlightenment, living my character, leaning with each breeze — now toward Israel, now away from it — in a series of schizophrenic visits to Amman, Damascus, Beirut, South Lebanon and later Tunis.”

He found, in his journeying, an Israel that defied his expectations — not a pale imitation of European port cities but “a nation in the process of re-assembling itself from the shards of its past, now Oriental, now Western, now secular, now religious, but always anxiously moralizing about itself, criticizing itself with Maoist ferocity, a nation crackling with debate, rediscovering its past while it fought for its future.”

The occasion of these quotes is an interesting one. They were given to journalist Douglas Davis at the Savoy Hotel during a meeting of what Davis described as, “mostly wealthy, mostly non-Jewish, mostly aristocratic supporters of Israel.” And the interview itself addressed accusations from the American press — namely The New York Times — about le Carré’s novel “The Tailor of Panama” containing an antisemitic characterization.

Writer Norman Rush wrote in The Times that the main character of that book, the Jewish Harry Pendel, was “yet another literary avatar of Judas.”

In defending himself, Le Carré noted how his American publisher was “an old Jewish publishing house.” He said others tried to talk him out of it, claiming his attack on the paper of record might appear to suggest that New York was a Jewish capital; “if it is,” le Carre told Davis, “I couldn’t be more delighted”.

The interview, his most concrete response to such criticisms, has hallmarks of philosemitism — and a fetishization that dips into troubling tropes.

Le Carré says as a child he fantasized about “belonging to a homeless, polyglot, hounded clan of heroic refugees called Jews, of whom otherwise I knew nothing except that at school they gave me sausages and were let off chapel.” He even recalled some quick-minded “middle European” Jews his father played poker with and whose “rich accents” he loved to imitate.

The Jews in his fiction — the aforementioned tailor, a Marxist librarian, a Stasi agent who flips on his ex-Nazi superior — long betrayed a fascination with Jews. Speaking to the Jewish press, le Carré allowed himself to go further, opting to identify with Jews.

He called his conscience a Jewish one, and spoke of “a spiritual kinship” with Jewish identity “that embraces what is creative in me, and forgives what is despicable, and shares with me the dignity and solitude and anger that are born of alienation.” Le Carré also credited himself for having a keen ear for “British anti-Semitism [sic] in the chattering classes.”

Sometimes, he contended, his effort to capture that on his pages led critics to assume he was joining in the chorus.

“My perception of Judaism at this stage was woolly and Anglo-centric,” le Carré insisted. “My Jewish archetype was the whipping boy of our European disorder.”

And yet, le Carré said he found in Israel a self-determined Jewish people.

“No nation on earth,” he told Davis, “was more deserving of peace — or more condemned to fight for it.”

He was not content to just hear the Israeli side of things, however, trekking to Beirut where he told Yasser Arafat he came to “put my hand on the Palestinian heart.” (Arafat then placed le Carré’s hand on his chest.)

Unlike the main character of Charlie in “The Little Drummer Girl,” le Carré didn’t feel conflicted to the point of a breakdown, but expressed his support for peace in the region while affirming a commitment to the Jewish state. The novel, he said, propagated “the heretical thesis that there are rights and wrongs on both sides of the Arab-Israeli conflict.”

That thesis has become less loaded with time, but another remark was prescient. Refuting the charge of antisemitism — le Carré believed it came from a place of overblown political correctness — he offered this hope for the future:

“I would also love the day to come when it is possible to criticize the State of Israel without being accused of being an anti-Semite,” le Carré told the Jewish World Review. “I have a right to the criticism of my friends in Israel, even when it stings. They have a right to mine. I do not believe that any great cause, or any great nation, was the better for the suppression of its critics.”

Just last year, le Carré signed an open letter pledging not to vote for Labour due to the party’s antisemitism scandals. Defenders of Labour’s then-leader Jeremy Corbyn believed that antisemitism was at times being used to deflect his criticisms of Israel. And probe found real causes for concern among the party.

Le Carré, with his nom de plume and rare comments to the press, had a strident politics, even as he was, to many of his legions of readers, something of a cipher. He has that in common with his most famous character, spymaster George Smiley.

“It is a sheer fluke that Smiley himself is not a Jew,” le Carré said. He then offered, “Perhaps he is.”