Remembering Catie Lazarus, a beacon of optimism and humor 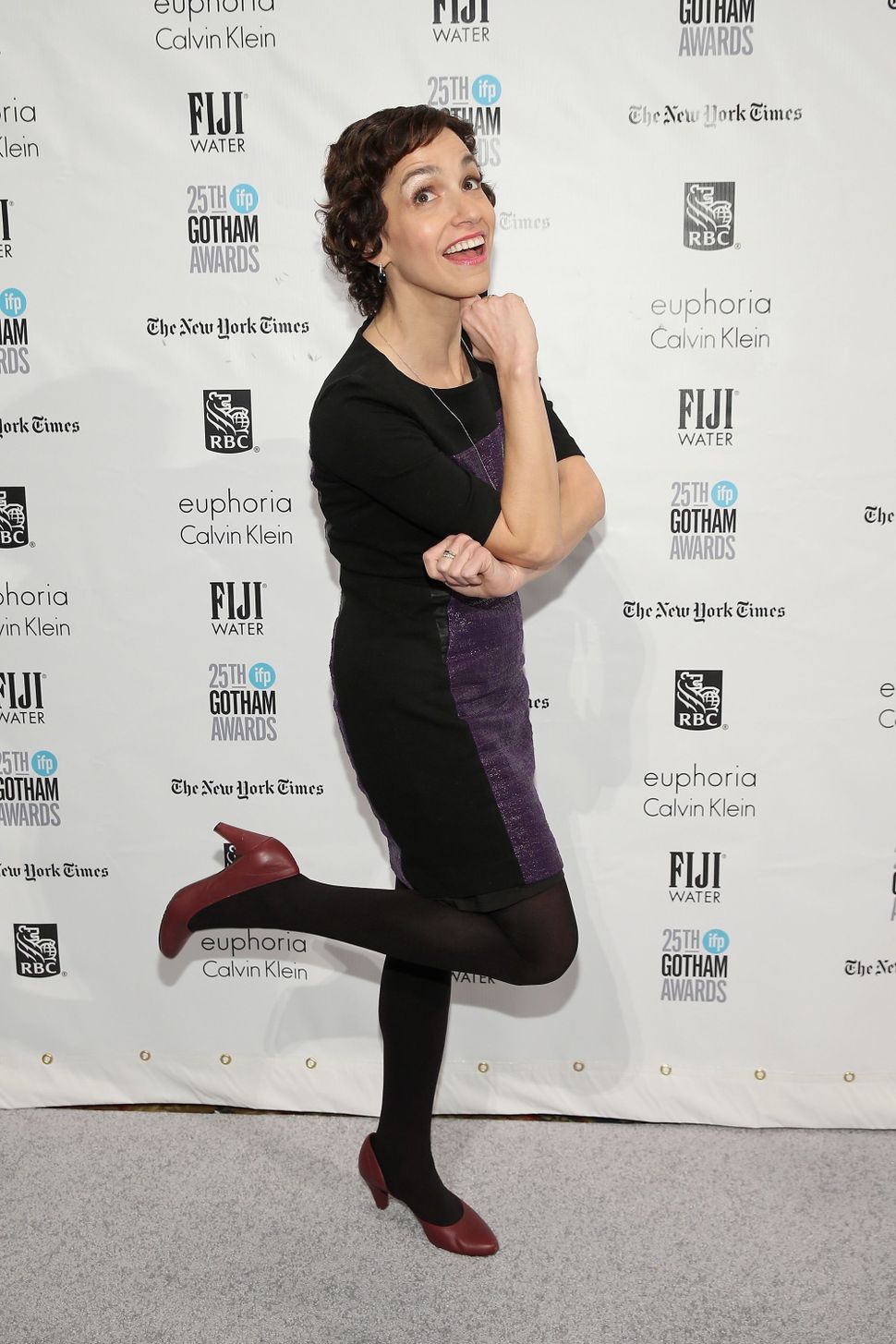 The American Jewish comedian Catie Lazarus, who died on Dec. 13 at age 44, made interviews into performance art through affectionate sibling-like jibes at guests, as if they were members of an extended mishpocheh.

Her “Employee of the Month” series of chats at the Public Theater’s Joe’s Pub in downtown Manhattan featured sassy challenges to celebrity interviewees like the Jewish playwright Wallace Shawn, who in September 2014 languidly claimed to have considered a job as a taxi driver decades earlier.

Lazarus brightly retorted, “I just can’t imagine you driving a cab; you would go so slow!” Then she collapsed with laughter at the mere idea of the lethargic Shawn pitted against the hurly-burly of Manhattan traffic.

Or in September 2015, when the personal shopper and stylist Betty Halbreich of German Jewish origin, profanely dissed the sister of her friend Joan Rivers. Lazarus retorted to Halbreich with an ironic grin, “I can see why you and Joan were good friends.”

Lazarus also welcomed fellow comedians like close relatives, delighting in Jon Stewart, Buck Henry (born Henry Zuckerman), Lewis Black, Dave Attell, and Sarah Silverman among others. Lazarus made it seem as if in her abbreviated life span, she might have laughed more than some people who were granted decades more of life than she.

Visibly enjoying the humor of her guests, not merely waiting for an occasion to display her own shtick, Lazarus offered more depth than most interviewers, especially those who are themselves comedians. After all, at one point she had been a doctoral candidate in the clinical psychology program at Wesleyan University, before dropping out to fulfill showbiz ambitions.

Without making conversations into turgid case histories, she followed in the footsteps of the great Chicago Jewish journalist and vocational investigator Studs Terkel, who was obsessed with finding out how people feel about day jobs and related life ordeals.

A prolific contributor to publications from Heeb Magazine to The Forward, Lazarus revealed further interest in dissecting the interviewer’s art in an online article from July 2017. In it, she analyzed a 1957 TV appearance by the child prodigy and quiz kid Leonard Ross who would grow up to be her godfather.

In May 2014 she prefaced an interview with former Jewish Congressman Barney Frank by alluding to his “zaftig figure.” Frank cautioned her that “for humor to be useful to a politician it has to include a very significant self-deprecatory element. Constantly just making fun of other people means you’re mean. People don’t like mean people. Humor increases your likability.”

More than merely likable, Lazarus’s public appearances were endearing, possibly due to an innate vulnerability. She confided to The New York Times in April 2015 that each day, she woke up “nervous about life, so walking down the street is terrifying.”

Alertness to the tribulations of others was another key element, as seen in her tribute from May 2014 to her family’s Nicaraguan nanny, Tina, over whose deathbed prayers were said in “Spanish, English and Hebrew.” Of Tina, Lazarus noted: “Catholic, she had me baptized, even though I am Jewish. (She didn’t fess up until I was 23 and insisted she was covering all the bases.)”

Beyond personal contacts, Lazarus also produced a series of interviews in 2018 for The Atlantic with people who had been fired from their jobs. Describing sudden unemployment as a form of “grief,” Lazarus displayed quiet sympathy and a merciful lack of joking with such subjects as Gordon Rothman, a multimedia producer who had worked for CBS News before being exposed to ageism in the job market. Her tone in this series was aptly compassionate, without an inkling of the nervy, slightly quacking voice that sometimes could be heard at her Joe’s Pub shows:

“The sheer amount of time Americans spend at work, and the relationships they form there, stamp their identities. Leaving that routine can be a profound shock. While the unemployment rate is at a longtime low, more than 6 million Americans remain out of work—not to mention the millions underemployed; in the gig economy, by choice or otherwise; or those who have dropped out of the labor force. Yet there is no HR pamphlet or job-training manual that can adequately prepare someone for what comes after an employer says ‘Your services are no longer needed’ or ‘We’ve decided to go in another direction.’”

A sympathetic listener, Lazarus could likewise cope with potentially unseemly subjects, such as when the sex therapist Esther Perel born in Belgium to a family of Polish Holocaust survivors, opined about “what the Holocaust teaches about love.”

Lazarus could put other guests on the spot, like Josh Tupper, owner of the historic Russ & Daughters Lower East Side delicatessen by challenging him to “slice lox so thin, you can read the NY Times through it.” Such matters as traditional Jewish appetizers and other highlights of New York cuisine were clearly of capital importance to Lazarus.

Her funeral service on Zoom, conducted with grace and emotion by Rabbi Shira Koch Epstein, Executive Director of Yavneh Bet: The Center for Rabbinic Innovation at the Office of Innovation of Hillel International, featured the expected El Malei Rachamim (Merciful God) prayer for the soul of a person who has died.

An allusion to her experiencing “the rest of the Garden of Eden” raised the question if after having already relished the delights of the Park Slope Food Coop in Brooklyn, of which she was a devotee, might Lazarus not find even repose in the Garden of Eden a bit of a letdown by comparison?

Her final tweet on an active Twitter feed was on Oct. 18, when she characteristically suggested that the U.S. Supreme Court might ask Congress to “honor their colleague” Ruth Bader Ginsburg by waiting until after the upcoming presidential election before replacing her, “instead of hiding in their bathrobes.”

With comparable, although more justified, optimism, Lazarus’s devoted family mentioned online that she had personally requested that donations in her memory might be made to such causes as Co-Impact; Doctors Without Borders; Just Vision; Planned Parenthood; The Public Theater; and the Brooklyn Academy of Music.

To which can only be added that self-abnegatingly, Lazarus had omitted to mention a cause which had affected her devastatingly, the still-unresolved risk that women of Ashkenazi Jewish origin have for breast cancer genes. This field requires further research to prevent cruel premature losses of much-loved and radiantly amusing people like Catherine Simone Avnet Lazarus.

Remembering Catie Lazarus, a beacon of optimism and humor