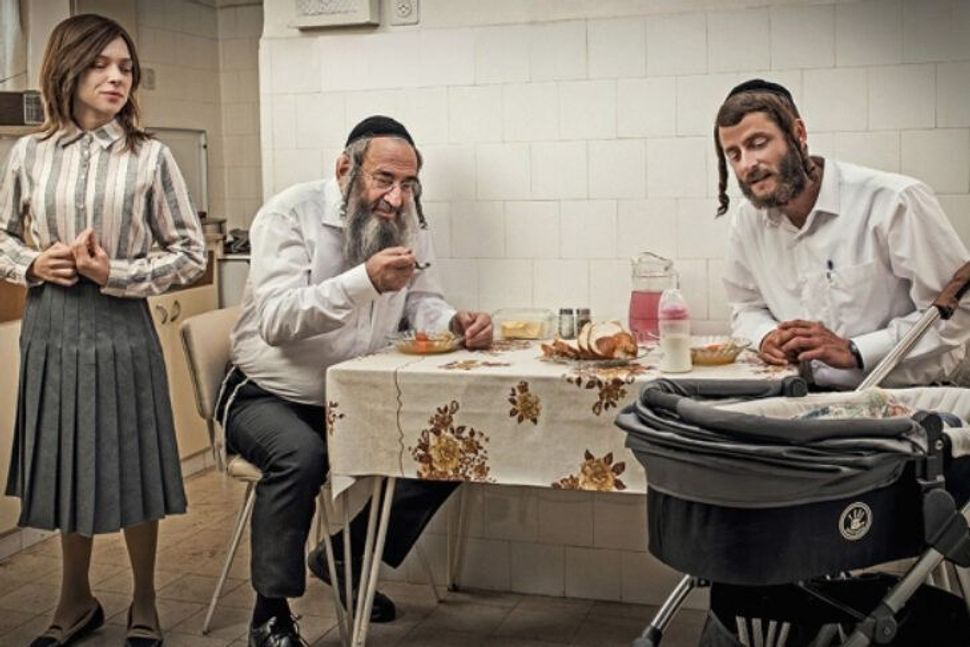 The Temple Emanu-El Streicker Center in New York City recently presented the world premiere of the first episode of “Shtisel” Season 3, which launched in Israel on Dec. 20 and is coming to Netflix in spring 2021. The virtual advance screening was preceded by a live panel discussion with the series’ stars—Michael Aloni (Akiva), Doval’e Glickman (Shulem), Neta Riskin (Giti) and Shira Haas (Ruchami)—and series co-creator Ori Elon.

“Shtisel” is the popular Israeli series about the joys and tribulations of a Haredi family living in Jerusalem’s Geula neighborhood. The show first aired on Netflix in 2018, five years after it debuted in Israel. Its universal themes of love and betrayal, social entanglements and intergenerational conflicts have resonated with audiences all over the world.

The unassuming beginning of “Shtisel” took place at a small Jerusalem restaurant of the same name. Elon said that he and his writing partner, Yehonatan Indursky, started with a Word doc they simply called “Shtisel.” Elon said the pair didn’t know where their imaginations would take them—they only knew they wanted to create the “hamishe” (cozy) feeling of the neighborhood. At that first pass, they envisioned Shulem and Akiva sitting at one table in the restaurant, with Ruchami, Giti and Lippe joining them.

Set four years after the end of Season 2, it’s not giving away any spoilers to say that Season 3 opens with Akiva married to Libbi. The couple has a baby. (That much of the story is obvious from the show’s trailer.) However, other plot lines of the first episode were embargoed until it aired. With that caveat, the actors were careful not to reveal further details. Aloni only offered that viewers will see more of Akiva’s life as an artist and continue to witness his complex relationship with his father. He said that when he read this season’s script, “I had tears in my eyes. I can’t tell if it was from joy or sorrow, or a mixture of both. I wanted to hug Ori for this great season and role, and where he took Akiva.”

Haas said that although Ruchami appeared in just a couple of brief scenes in the premiere, audiences will encounter a lot more of her in the upcoming nine episodes. “I see how mature she’s become since the first season, understanding who her family is and her responsibility, and in the second season becoming this person she is,” she said. Haas slipped in that she and Hanina are still married. “It’s a whole new level [for Ruchami], being a woman, being a wife and dealing with hard stuff,” she added. “It’s about her relationship with Hanina and the heartbreaking challenges they’re going through.”

After a five-year hiatus, each of the actors commented that it was surprisingly comfortable to reprise their roles. Glickman said that he and his character, Shulem, have had a long, fruitful relationship. “I know him well,” he said. Haas said that returning to “Shtisel” was akin to coming home. “It was natural to go back to the character,” she said. Riskin spoke at length about reacquainting herself with Giti. She compared getting back into Giti’s character with meeting an old friend. “You know the inner soul of this person,” she said.

When asked about his initial audition for the show, Aloni recalled that he read scenes with Glickman, but the producer had some doubt about whether he was right to portray a Haredi Jew. A makeup artist glued various beards with payes (side curls) on him. Soon enough, everyone realized that if he grew a beard, he could assume the role with authenticity. “I never wanted a role so much as this one,” Glickman noted. “When I read it, I was astonished. I never read such a script.” He auditioned twice for the show and nailed the part on the second reading.

Riskin said that initially she didn’t know much about Giti from the two scenes she read. “But I had an intuition about this character,” she said. “She’s very assertive in a quiet way. She gets what she wants and nobody notices that she took it. She sneaks in, takes something and goes.” Riskin immersed herself in the role by spending time with Haredi families. The experience not only gave her insight into the ultra-Orthodox way of life, it also revealed to her that “Shtisel” was not about religion. “It’s about people living in a certain way,” she said. “I had a coach who told me, ‘It’s not about what you believe; it’s about how you behave.’”

Glickman concurred that “Shtisel” isn’t about religion. “It’s about relationships between people that have desire, love and jealousy,” he said. “It’s the religion that makes the drama deeper and the conflict stronger because they have to stand before God every day.” Complementing Glickman’s observation, Aloni added: “‘Shtisel’ has built a bridge connecting both sides of the equation. In the end, we are all human beings. We are striving for something; we have the same wills and dreams, and we’re all flawed in different ways. That’s what makes us humans, and you see that in the show.”

The popular actors also mentioned they had other projects. Aloni is starring in a multi-generational saga called “The Beauty Queen of Jerusalem,” in which he plays the patriarch of a large Sephardic family living in 1920s and ‘30s Israel. “We follow the family for generations, and their journey is like the history of Israel,” he said.

Glickman recently returned from Prague, where he wrapped filming on “Oslo,” based on the play of the same name about the Israeli-Palestinian Peace Accords. Haas revealed that her latest film, “Asia,” which won an Ophir—Israel’s equivalent of an Oscar—for best film, is the country’s entry for the Academy Awards. She declined to say what her next project was, but said she was “very excited about it.” In a similar vein, Riskin said that she had something in the works.

As for the looming question of whether the series will continue after its third season, Elon said he is contemplating a fourth season. He admitted that writing the latest episodes of “Shtisel” had been laborious. Evoking the Five Books of Moses, he said the first season was “tremendous like Genesis,” and inspired him to look ahead to at least four more seasons.

Elon said the newest season has felt like Leviticus, the third book of the Bible in which the Jews wander in the desert. “I’ve encountered some writer’s block, and I don’t know what will follow,” he said. “Hopefully, there will be two more seasons, and the ‘Shtisel’ characters will live forever.”

Judy Bolton-Fasman is the arts and culture writer for JewishBoston.com. Her essays and articles have appeared in The New York Times, The Boston Globe, The Forward, Tablet Magazine, Cognoscenti and other venues. Her memoir, “Asylum: A Memoir of Family Secrets,” is forthcoming in fall 2021 from Mandel Vilar Press. Email her at judy@jewishboston.com.

This article was originally published on JewishBoston.com and has been reposted with permission.