The weirdest habits we’ve developed during this weirdest year 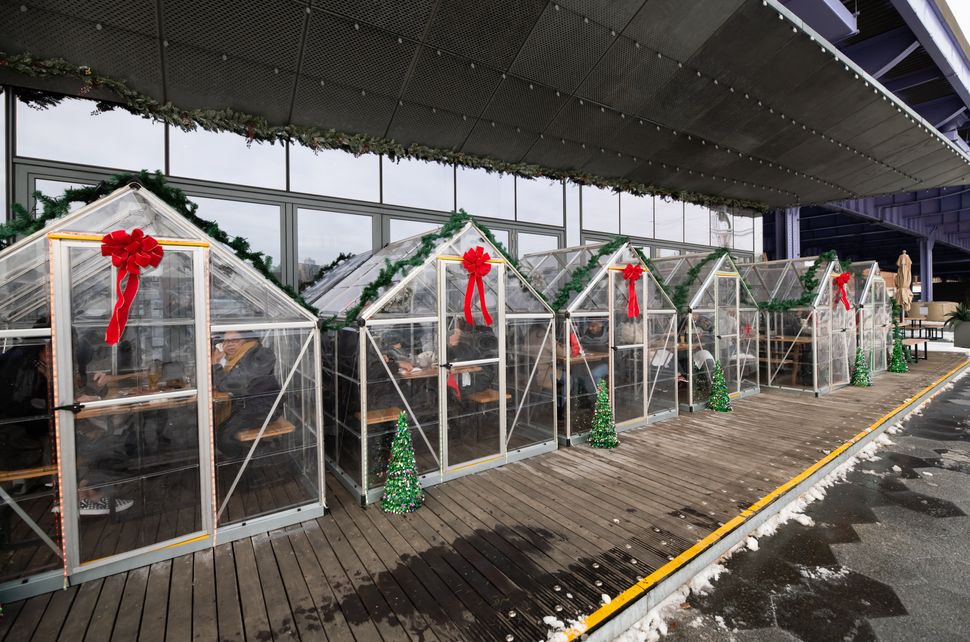 Outdoor dining tents are decorated for the holiday season on December 18, 2020 in New York City. By Noam Galai/Getty Images

So you can feel affirmed in whatever oddities you’ve found yourself reaching for to occupy your time — or just laugh at our plight — here are some of the weirdest things the Forward staff, and those in our orbit, have found ourselves doing this year. Some are probably relatable, some are actually quite lovely and some — well, some are just strange.

Starting a new job on Zoom — in another country

Several of us at the Forward have started our jobs here during the pandemic. Most notably, editorial intern David Ian Klein has been stranded in Turkey since the pandemic began, and since taking this job has stayed up late to Zoom into meetings from his basement in Istanbul.

Hypochondria — but not about COVID.

Investigative reporter Molly Boigon has turned into all of our parents, nagging herself about her posture.

“Because I sit in the same chair all day every day, I feel that my back has rounded and I am on the fast track to terrible posture. To prevent this I have started sleeping on my back without a pillow. I know this sounds insane. I haven’t noticed a difference in my posture but the paranoia about hunching over in my sleep makes me unable to fall asleep with even the flattest pillow.”

Sure, yes, we’ve all done it on a road trip. But without coffee shops or hotel lobbies to run into when desperate, and with all socializing taking place outside, sacrifices have to be made.

Personally, this author has peed multiple times behind the shed in a friend’s backyard, even though the house was right there. The fairly sheltered shed area was actually a considerable upgrade from the large bush on a median strip in Queens that he’d recommended, which had apparently become a favorite of his on walks.

Some of us have had more magical quarantine experiences than others. Opinion Editor Batya Ungar-Sargon trained a flock of mourning doves to land on her windowsill and coo. “It gives me no end of delight,” she says. “They are magnificent.” How did she lure them? “The old-fashioned way:” food.

“While I’ve covered everything in Yiddish over the years and have found myself looking up all sorts of unexpected terms, I never thought I’d get so much practice writing about pandemics, viruses, immune systems, quarantines, fevers, rashes, body bags, morgues etc.,” wrote deputy Yiddish editor, Jordan Kutzik.

“I’ve learned a lot of the terminology as needed and found ways to express other concepts that didn’t exist before, such as the expression ‘social distancing,’ which is really a terrible misnomer as it’s physically distancing and not necessarily social distancing.”

Developing an addiction to TikTok

Judging by the exponential growth of the app, TikTok addiction is a common coping mechanism for the pandemic malaise. But while, at least stereotypically, the app’s usual users are teens, staff writer PJ Grisar became one of the adults to fall prey to TikTok’s algorithmic spell.

“It starts small, with daily updates from users on their hobby farms. Then you learn about various popular sounds that Zoomers use on their videos. There are the dances and the subcultures,” he said. “Jewish TikTok is a thing. So is Synth Rat Tiktok (don’t ask) and ‘Ratatouille: The Musical’ TikTok. Early in the pandemic I would spend at least an hour each morning scrolling through an algorithm that would appear to have the dopamine potential of hard drugs. In short, I went through something these last few months. I’m on the other side of it now. But I will never be the same.”

“Without a doubt the weirdest thing I have started doing during the pandemic is insisting that my brother and his fiancée FaceTime me just so I can talk to their dog, Sparrow,” said innovation editor Talya Zax. “Sparrow does not understand FaceTime, so this endeavor mostly means making my brother chase him around while I scream his name from the phone, which I can imagine is somewhat traumatizing for both Sparrow and my brother. However, it is worth it because Sparrow is very good and I love him, and on occasion when trapped he will give the phone screen a little nuzzle, at which point I cry.”

Online board games with strangers

Editor-in-chief Jodi Rudoren found herself addicted to something less common than TikTok:

It started as a new family board game: after spending a pandemic week with her cousins, my daughter insisted we order Settlers of Catan. I love board games but had avoided this one, perhaps because I first discovered it while living in Jerusalem covering the Israeli-Palestinian conflict, where I didn’t want to spend my off time thinking about “settlements.” (Catan turns out to be based on fictional islands off the south of France.) Now, I was entranced by the interlocking pieces, intrigued by the mix of strategy and luck and almost instantly addicted.

But Catan takes a good hour to set up and play — and getting me, my husband and both kids psyched to do the same thing at the same time is something of an ordeal. Then my nephew turned me on to colonist.io, where there is no setup, the speed can be set to “very fast” and there are always people ready to play — mostly, I’m convinced by the coarseness of the chat, teenage boys. I’m surprised and a little embarrassed to admit it’s become a daily habit.

I generally play at 8 or 9 p.m., multitasking in front of the T.V. Sometimes also while cooking, taking my turns between stirs of the soup. It’s the perfect balance of distracting and engaging — it decompresses me from the stresses of work, child-rearing and pandemic-worry, but it’s also challenging. And the stakes couldn’t be lower.

Early in his tenure at the Forward, national editor Rob Eshman, who has the good luck of living in Los Angeles, ran a Zoom event in which we saw his beautiful garden, where he harvested some of the artichokes he was growing on camera. I told him how jealous I was; artichokes are my favorite vegetable. About two weeks later, the USPS deposited a box on my Brooklyn doorstep. It contained six artichokes, their stems carefully wrapped in a still-damp paper towel to preserve them on their cross-country journey.

The “Bachelor” and “Bachelorette” franchise:

“I’m not ashamed to admit I watched multiple seasons of ‘The Bachelor/ette’ this year, but now, having watched them, I’m ashamed to admit it never occurred to me to watch them before,” said reporter Ari Feldman.

“There is a time and a place for reality television, and for me that time is anytime during a pandemic and the place is my bed. Also, sometimes, the time is from 5:01 P.M. until whenever I drift off to sleep, dreaming about roses and the lengths to which humans will go to achieve a lifelong partnership. Watch the show (skip through the previews and recaps, it goes faster) and marvel at the fact that none of these people — aside from the titular bachelor/ette — is getting paid to compete for love in front of millions of viewers.”

Eating in the freezing cold

This has become the norm in the pandemic, but we should not forget that it is absolutely insane to try to consume a meal outdoors once the temperature has dropped below 50 degrees, lest your fingers grow too numb to hold a fork. Forward writer Irene Katz Connelly spent her Thanksgiving dinner huddled around a restaurant style heat lamp in a backyard, a far cry from the cozy, boisterous meal we usually think of.

Investigative reporter Molly Boigon has worries that go beyond posture, including a growing obsession with former president George W. Bush.

“In reading a book about the history of the Republican party, I was reminded of all of these moments during Bush’s presidency that I was barely conscious for but rang tiny bells in my head (I was born in 1994),” she said. “Elian Gonzalez, Terri Schiavo, the economic stimulus package, No Child Left Behind, Hurricane Katrina — these are all things that swirled around me as a child that I never truly understood and never really had the time or interest to explore before. I ordered two books about the Bush years from Books Are Magic in Cobble Hill and when I went to pick them up, the employee just said ‘George W. Bush???’”

It’s understandable that many of us have become sedentary during quarantine. Senior News Editor Helen Chernikoff, however, got into doing pushups between tasks. I admire her commitment; I personally have tried many exercise routines for the pandemic, none of which I’ve managed to keep up for more than a single day.

My roommate had been planning to go to her friend’s wedding in the spring, but of course it was canceled; the couple managed to elope in early March and sent around a film of the tiny ceremony. We decided to pretend we had been there, even though the rest of our household had never met the bride or groom. We dressed up, arranged chairs for the ceremony (at which we watched the elopement), and held a reception complete with dancing, photobooth and, of course, a tiered cake.

Personally, though I love sleeping in, I’ve been unable to, even though I only really need to wake up 15 minutes before work. Perhaps it’s my anxiety about the world ending. Reader Suzanne Frisch, however, has had the opposite experience, and finds herself suddenly sleeping in. “I’ve never done that in 62 years — even as a teenager,” she wrote.

“I usually gravitate toward political nonfiction of various sorts,” said reporter Arno Rosenfeld, “but now I find myself struggling to read anything other than sort of literary pop fiction (“Severance,” “The Incendiaries,” “Normal People”). My backlog of books on the Israeli-Palestinian conflict is gathering dust.”

We’re not even close enough to infect each other, yet every time someone coughs or sneezes in a meeting, they hurry to reassure everyone that it’s not coronavirus. I had a cough for nearly two months in the early pandemic and, growing tired of repeating my excuse, I began to mute myself strategically even while talking, subtly pausing mid-sentence to cough before carrying on after what I hope appeared to be a thoughtful pause.

The weirdest habits we’ve developed during this weirdest year