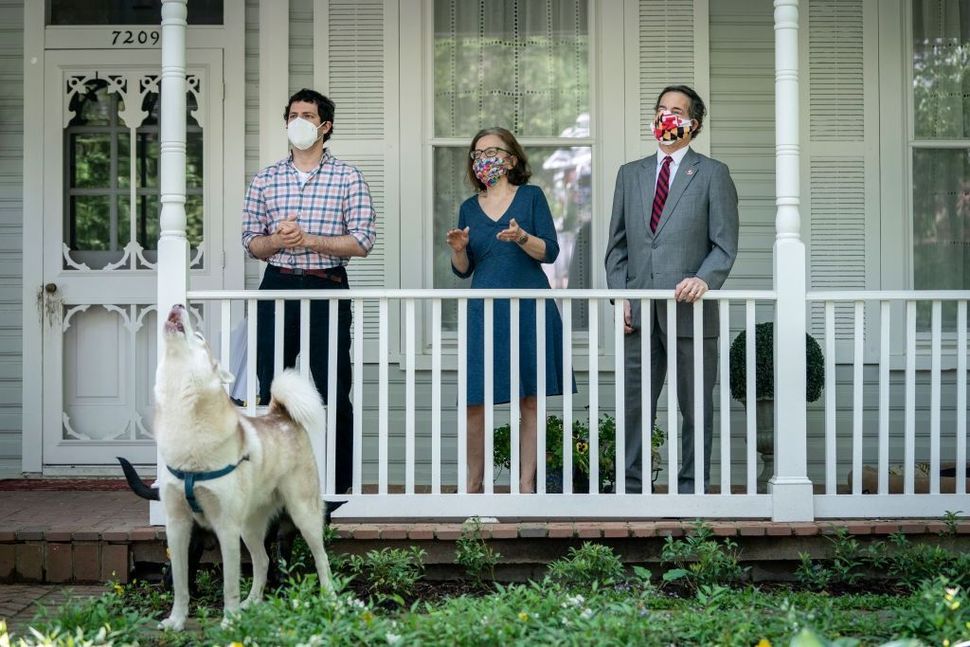 Thomas Raskin, left, stands with his parents earlier in the year listening to a group serenade them. Courtesy of Getty Images

Tommy Raskin was, by all accounts, a deeply empathetic individual, whether fighting on behalf of humans or animals. His father, Rep. Jamie Raskin of Maryland, wrote in a statement published on Medium that his son “hated cliques and social snobbery, never had a negative word for anyone but tyrants and despots, and opposed all malicious gossip, stopping all such gossipers with a trademark Tommy line — ‘forgive me, but it’s hard to be a human.’” On New Year’s Eve, it became too hard; Tommy Raskin died by suicide.

The heartbreaking tribute by Raskin and his wife, Sarah Bloom Raskin, hit a nerve. “May his memory be a blessing,” resounded around Twitter as the eulogy was shared widely. This outpouring of support is a sign of how far the discourse around mental health and suicide has come in Jewish circles.

Historically, Judaism took a hard-line stance against suicide, forbidding mourners from sitting shiva and sectioning the graves off from the rest of the graveyard. Suicide was seen as knowingly taking a life, which removes God’s power to decree life and death, and a violation against the exhortation to preserve life, pikuach nefesh. Thankfully, there are also rulings decreeing that suicide “by compulsion,” which includes mental illnesses, should be mourned fully; today, that category includes the vast majority of deaths by suicide.

“Mental health has been an issue in the Jewish community since biblical times. Even our heroes, Elijah and Moses, have called out and needed support,” said Efrem Epstein, founder of Elijah’s Journey, a Jewish suicide awareness organization. He uses characters such as Elijah, Moses, Chana and Jonah to illustrate that mental health struggles are an accepted part of Jewish history and tradition in workshops at Hillels, synagogues and camps.

But there is still a strong stigma against mental illness, and often a taboo against sharing that a loved one died by suicide. A 2014 article in Tablet discussed a young man who was forbidden by his family from discussing his multiple suicide attempts or his mother’s mental illness for fear that it would damage their reputation or marriage prospects.

This is why the congressman’s open and loving declaration of his son’s struggles was so moving for many in the Jewish community, as was his unambiguous description of Tommy’s depression as an illness, a “relentless torture of the brain,” instead of something shameful.

She described the positive shift change she’s seen in the Jewish community’s approach to suicide and mental health; just two months ago, she worked with an Orthodox family whose son died by suicide; they sat shiva and the community was very supportive, she said. But it’s hard to generalize about the progress across the Jewish community, or even denominations.

“I’ll hear someone from one congregation say, ‘Oh we’ve certainly normalized mental health in our community,’ and then someone from a similar branch of Judaism say, ‘Well we certainly need to talk more about this,’” she said, an observation echoed by Epstein, who noted that many communities also need to try harder to keep up with changing best practices.

This is not a problem unique to the Jewish community; open discussion of mental health is only just beginning to enter mainstream discourse. But the more it is discussed, the more support will be available to suffering and those who have lost loved ones.

It’s not always enough — the congressman said his son had good doctors and friends and family who knew what he was fighting against. But the discourse around mental health has a long way to go; especially in a pandemic that has distanced many from their support networks, communities need to continue fighting to open the conversation around mental illness so people are able to get the help they need. As Tommy Raskin said in the note he left on New Year’s Eve, “My illness won today. Please look after each other, the animals, and the global poor for me.” May his memory be a blessing.

If you are struggling with mental health or suicidal ideation, help is available. Call the National Suicide Prevention Lifeline at 800-273-8255.

Mira Fox is a fellow at the Forward. You can contact her at fox@forward.com or on Twitter @miraefox.