Actress Alley Bean sheltering in place at her home in Venice. Image by Alon Goldsmith

On the morning of April 1st, 2020, about two weeks after the United States entered a national state of emergency and Governor Gavin Newsom issued California’s first statewide stay-at-home order, Alon Goldsmith slung his camera bag over his shoulder, hopped on his bicycle, and began pedaling through the quiet, empty streets of the Del Rey neighborhood in Los Angeles.

Goldsmith arrived at his destination— the sidewalk across the street from his friend Tray’s apartment building— and looked up toward the second floor where Tray stood leaning over the balcony.

He pointed his camera, and snapped the image.

And so was the start of “In Place: Portraits of a Pandemic,” a photography project showcasing portraits and profiles of over 100 Angelenos as they shelter in place. 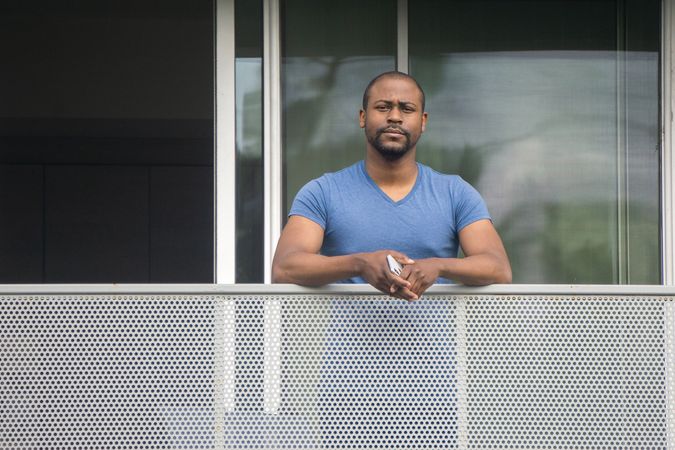 Tray Thompson, who works in the financial services industry, stands for a photo on the balcony of his apartment building in Del Rey, Los Angeles. Image by Alon Goldsmith

The project features a random sampling of people Goldsmith, 59, has encountered throughout his 35 years living in Los Angeles— from rabbis to rock stars to authors to activists— and gives a glimpse into their lives in lockdown.

For each profile, Goldsmith aimed to get three particular shots— a longer-distance establishing shot of his subject in front of their home, a close-up, and a shot through a window or cracked door— in order to tell his subjects’ stories in the most compelling way.

He also sent his subjects a variety of questions and prompts to get a better sense of their unique pandemic experiences and included the responses next to their portraits. Abira (75) stands in her home studio. She is a working artist is sheltering in place in Brentwood, Los Angeles. Image by Alon Goldsmith

Goldsmith thought of the idea for “In Place” in late March when his wife showed him photos a man had taken of his neighbors sitting on their porches. He immediately started thinking of ways to create a project based on the shared experience of different living situations. And after sharing his idea with friends on Facebook, Goldsmith began filling his days with socially distanced photoshoots.

“I wanted to dig into what it is everyone is doing to pass the time, to work, to handle challenges, to live in these unprecedented times” Goldsmith said. “The question was how to capture that with photography, and how to do it safely.”

Goldsmith spent about 30 minutes photographing each of his subjects, in most cases shouting through his mask to communicate and give direction.

“It was quite a reflection of the time we’re in,” Goldsmith said. 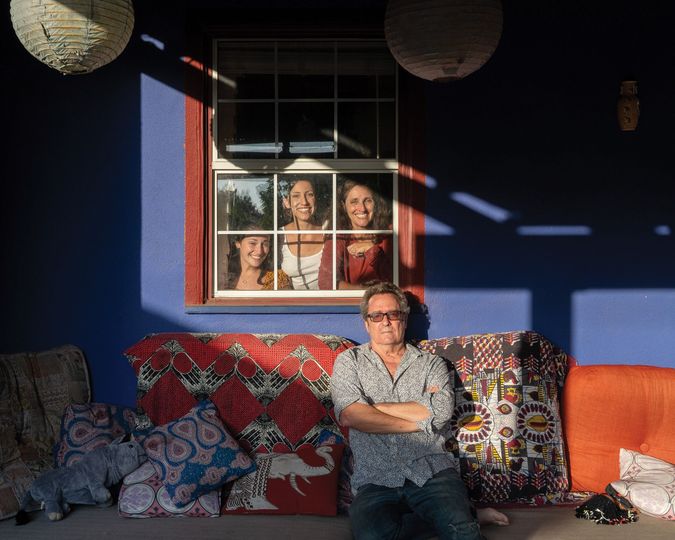 Goldsmith stumbled into photography almost by accident. Originally from Johannesburg, South Africa, Goldsmith grew up loving music and went to study English at the Hebrew University in Jerusalem.

Although Goldsmith had a passing interest in photography since age five (when he got his first Instamatic camera), he didn’t seriously begin pursuing it until he moved to Los Angeles and began commuting to his job at an ad agency on his bike.

His morning route took him along the Venice Beach boardwalk where he was inspired to hop off and take photos of the interesting people and scenes he saw with his iPhone— a silhouetted skateboarder, a person juxtaposed against a colorful wall, or a man in a space suit carrying a briefcase.

To Goldsmith’s surprise, his photos began gaining traction in online iPhone photography communities, and soon he enrolled in photography classes.

“Up until that point my photography was very reactive. I was going to places and waiting for something interesting to happen,” Goldsmith explained. “But through my class I began to understand and appreciate the art of project-based photography and the idea of manipulating situations to create something based on a bigger idea. I would have never found my way to ‘In Place’ if not for that course.” 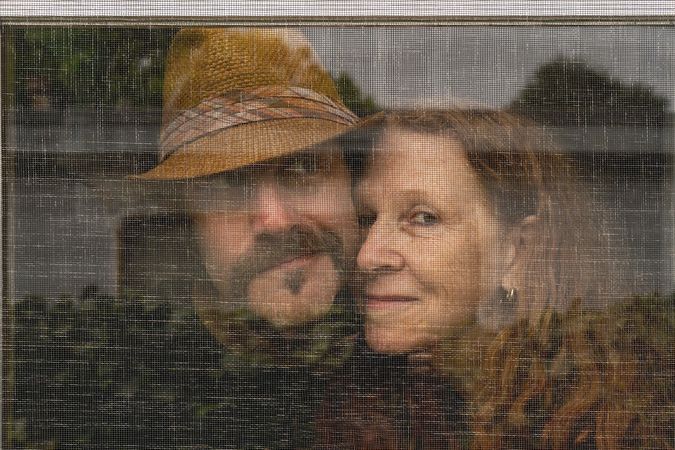 Goldsmith’s passion for his project only grew as the pandemic wore on and lockdowns remained. It gave him a productive way to fill his time and a way to connect with people in a time when connection was scarce.

Sharon Brous, Goldsmith’s rabbi and the founder of IKAR synagogue in Los Angeles, posed for a photo with her family at their home in Los Angeles. Alley Bean, a well-known actress, opened up to Goldsmith about the tragic death of her husband, actor Orson Bean, early in the pandemic. Salty, a woman sheltering in place in a tent by Ballona Creek in Culver City whom Goldsmith met by chance, gave Goldsmith a grand tour of her art garden and shared intricate details of her childhood and cultural awakening. 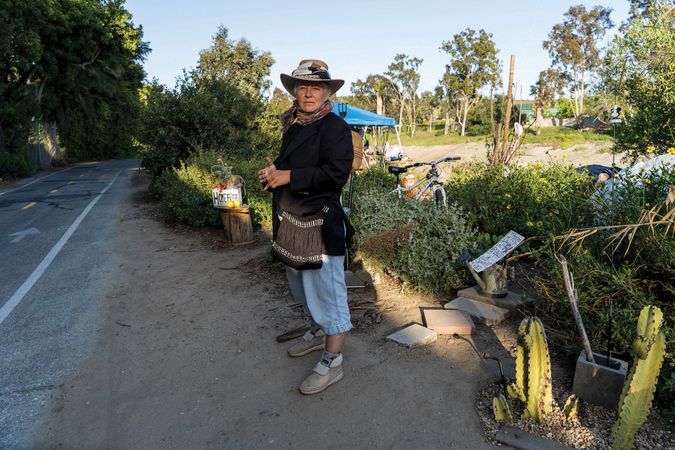 Salty, sheltering in place in her tent by Ballona Creek, gives Goldsmith a tour of her art garden Image by Alon Goldsmith

While COVID-19 limited time for extended interaction, Goldsmith said there was something special about being allowed into people’s lives at a time of such dramatic change in the world and in people’s personal lives.

“There was something deep about it even though it was so fleeting,” Goldsmith said. “I felt quite close to them while I was creating their profiles.” 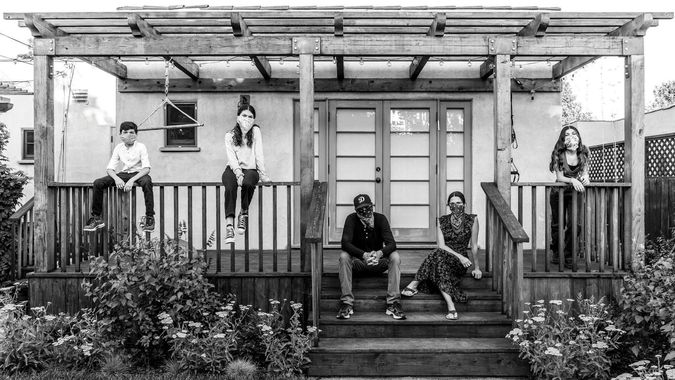 Rabbi Sharon Brous, her husband and comedy writer David Light, and their three children ages 16, 14, and 11 Image by Alon Goldsmith

While “In Place” is Goldsmith’s brainchild, pandemic photography projects are not an original concept. Many in the global photography community, both professional and amateur, have been moved to take photographs and develop projects inspired by COVID-19’s impact on people’s everyday lives.

“It makes a lot of sense,” Goldsmith said about the other projects he’s seen. “Photography has become even more important than it was before. People have a sense of the significance of the time we’re living through, and with that comes a need or desire to document it for posterity.” 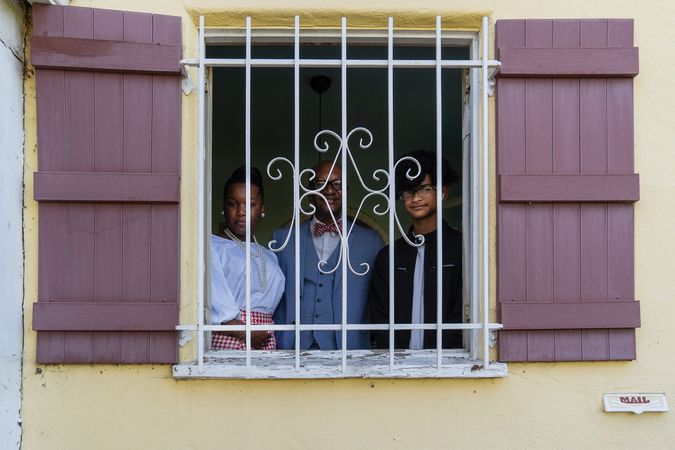 Sean Morris (center) and his two children, Janette(13) and Jonathan(15) quarantining in their home in Los Angeles Image by Alon Goldsmith

The impact of “In Place” can be partially attributed to its chronological nature, which Goldsmith maintained so as to keep continuity and allow his audience to see the passage of time. In this way, the project’s presentation is reflective of the unpredictable ebb and flow of Los Angeles’ lockdown, and allowed Goldsmith to capture an honest and unapologetic timeline of movement, angst, loneliness, fear, confusion, contentment, joy, and acceptance.

“Just like the pandemic itself, the project and the way it unfolded was a learning and growth experience for me,” Goldsmith said. “An ‘I don’t know how to do this, I’ve got to figure this out as I go’ kind of thing, which is what everybody has been doing in their lives. There’s no manual, we’re getting better at it, and yeah, we all slip.”

More information about “In Place: Portraits of a Pandemic” can be found on the artist’s website www.alongoldsmithphoto.com. You can also follow his work on instagram @alon_goldsmith.