No, the Trump Twitter ban isn’t ‘Orwellian’ – Stop saying it is. 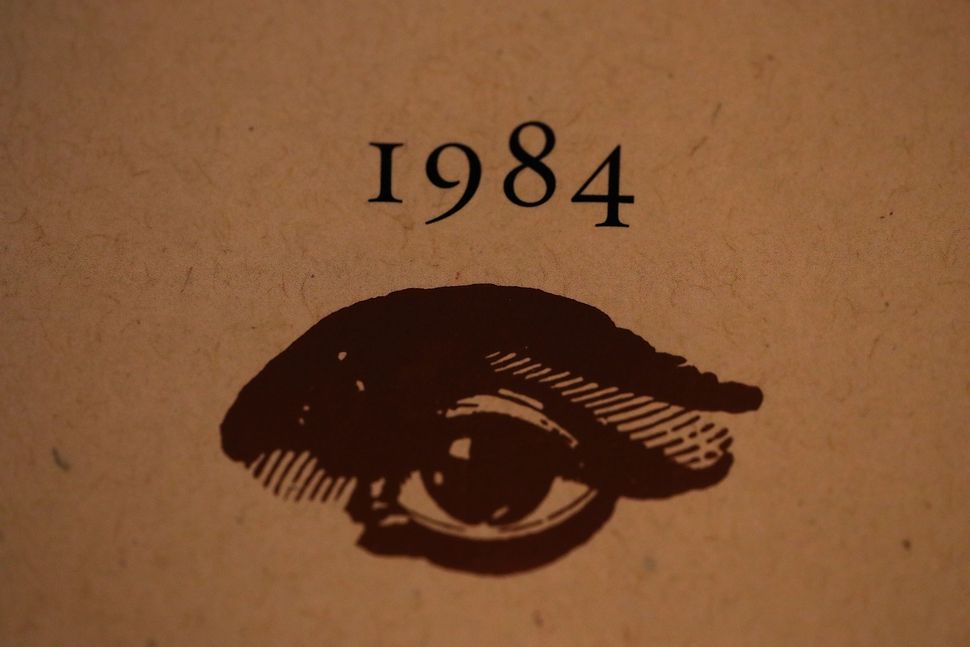 Events that have been taking place in Washington will force dystopian novelists to try a little harder to imagine the collapse of civilization.

When Twitter permanently banned President Donald Trump’s social account in the aftermath of the violent riot that took over Capitol Hill, sending members of Congress into hiding and reporters fleeing for cover, German chancellor Angela Merkel slammed Twitter’s decision, saying it was a “problematic” breach of the “fundamental right to free speech.”

Others on the right rushed to call the Twitter ban “Orwellian,” echoing the President’s son, Donald Trump Jr., who said: “We are living in Orwell’s ‘1984.’”

“Orwellian” is an interesting word choice — is it accurate?

In “1984,” a totalitarian state removes the freedoms of private citizens. Yet it’s extremely strange to hear a left-wing, lifelong anti-totalitarian writer invoked to describe this slap on President Trump’s wrist, after he rode his Twitter account all the way to the presidency. Trump’s insistence that he did not have to leave office, and his incitement of a riot that left five dead — all that is evidence of aspiring totalitarian behavior. And totalitarianism was Orwell’s Great Enemy.

The fact that the right is using “Orwellian” is not entirely surprising, because there has long been disagreement — on both sides of the pond — on what “Orwellian” means.

That disagreement precedes the rise of Trump, the seditious behavior of Senator Ted Cruz and the most recent incarnation of the Republican party, which has moved so far from its roots that none other than Colin Powell has announced that he is no longer a Republican.

Orwell published seven novels, but also three nonfiction books, pamphlets and hundreds of essays, which make it a lot harder to use the word “Orwellian,” simply because the writer’s subjects are so varied, ranging from boarding school to Burma to why people write.

But everyone seems to like to use the word “Orwellian,” for all kinds of reasons. Back in 2003, on the 100th anniversary of Orwell’s birth, Geoffrey Nunberg wrote about the term “Orwellian” in The New York Times, noting that the adjective appears online far more often than terms like “Kafkaesque” and “Hemingwayesque” and “Dickensian” combined.

“If It’s Orwellian, It’s Probably Not,” the headline noted.

”Orwellian” reduces Orwell’s palette to a single shade of noir,” Nunberg aptly observed. “It brings to mind only sordid regimes of surveillance and thought control and the distortions of language that make them possible.”

In addition to the novels “1984” and “Animal Farm,” which is what people tend to mean when they say “Orwellian,” there is also Orwell’s magnificent writing on the power and danger of language, which is directly relevant to the Twitter ban on Trump. In his famous essay “Politics and the English Language,” Orwell warns about the relationship between language and murder. He notes that unclear language can hide the desire to kill.

I believe Orwell was thinking of terms like “Final Solution” when he wrote “Politics and the English Language” — and railed against phrases that do not place the fact of mass murder in prose as clear as a windowpane. Or perhaps he was thinking of Stalin and the phrase “enemy of the people,” applied to Jews, and repurposed by Trump to apply to journalists.

Orwell advocates for using individual words instead of cobbled-together phrases that obfuscate the truth. He sees danger in meaningless phrases. He would shudder at “Make America Great Again,” which says nothing and therefore opens the door to horror. And Orwell would probably frown at “Orwellian,” which has no clear meaning.

In a 2014 piece in The Guardian, Sam Jordison says that the problem with “Orwellian” is not just that no one can agree on what it actually means, but that it has two opposite meanings.

“It is both a compliment and an insult,” Jordison writes. “If you call a person an Orwellian, they generally like it. If, however, you refer to something they’re doing as Orwellian – and by extension a bit like all that horrible stuff in ‘1984’ – odds are you aren’t aiming for their Christmas card list.”

In “On Tyranny: Twenty Lessons from the Twentieth Century,” Timothy Snyder observes that one of the goals of dictators is to discredit all sources of information other than themselves. If the news is worthless, then only the leader has the facts. And of course, if the dictator is doing his job, belief in facts will be shaken.

Trump has so dominated the American conversation — and the global one — that his phrases and framings have functioned as a means of maintaining power and control. Now, years into this drama, the tech giants are finally stepping in, making themselves the arbiters — not the State.

Is that attempt to mute the microphone and reclaim American language, in all its fullness, “Orwellian,” whatever that means?

What is most “Orwellian” is the importance of thinking clearly. If he were alive, Orwell would show us how that ability is literally a matter of life and death — and Orwell would emphasize how horrible an assault on life is. Here is Orwell in the essay “A Hanging,” writing on observing the killing of one man — and how he realized what that meant:

“It is curious, but till that moment I had never realized what it means to destroy a healthy, conscious man. When I saw the prisoner step aside to avoid the puddle, I saw the mystery, the unspeakable wrongness, of cutting a life short when it is in full tide.”

We need to see “the unspeakable wrongness” of what is happening in America. We need to be clear: five dead at the Capitol, 374,000 and counting from the coronavirus. And we need to talk about language, and acknowledge the transformation of the American conversation into Trumpspeak. In these dark days, we must face how murderous language went so far, and up so high, in the storied echelons of power in America, that it led to murder itself. As for Orwell, his essays show us that he would be focusing on the loss of life, not the loss of a Twitter feed.

Aviya Kushner is The Forward’s language columnist and the author of The Grammar of God (Spiegel & Grau) and Wolf Lamb Bomb (forthcoming from Orison Books in June 2021). Follow her on Twitter @AviyaKushner

No, the Trump Twitter ban isn’t ‘Orwellian’ – Stop saying it is.