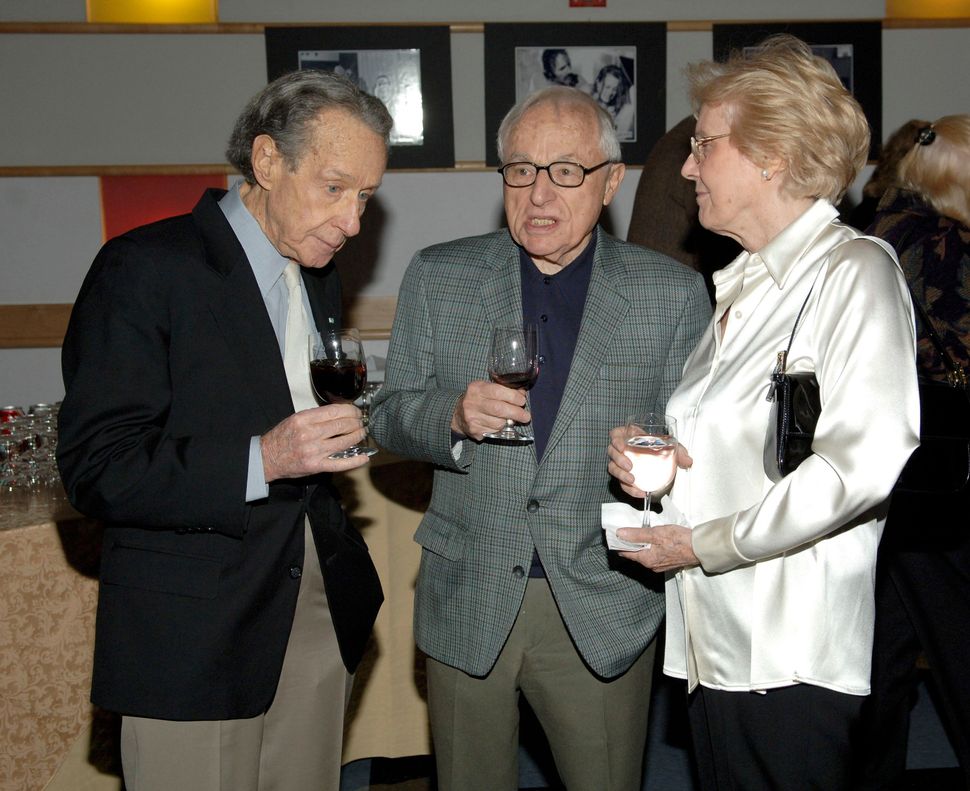 The American Jewish screenwriter Walter Bernstein, who died Jan. 23 at the age of 101, knew how to choose his battles. Perhaps most celebrated for “The Front” (1976), a semi-autobiographical evocation of his experiences during the Hollywood Blacklist, Bernstein fought for social progress while astutely side-stepping some life-threatening conflicts.

Bernstein was born in Crown Heights, Brooklyn in 1919, just as his grandfathers progressed from being pushcart peddlers to shopkeepers. On the high holy days, his family would attend Chovevei Torah on Eastern Parkway, known locally as Murphy’s Shul. He was bar mitzvahed and told one interviewer later, “I’ve always been happy to be a Jew,” but Bernstein’s family was mainly assimilated. Still, they proudly discussed Hollywood films with strong Jewish themes like Al Jolson’s “The Jazz Singer” (1927) and “Symphony of Six Million (1932).”. The latter, based on a story, “Night Bell,” by Jewish author Fannie Hurst, starred Ricardo Cortez, (born Jacob Krantz) as a Jewish doctor who loses touch with his roots.

After he graduated from Erasmus Hall High School, Bernstein was sent for a few months in 1936 to Grenoble to improve his command of the French language. There he witnessed the rise of the Popular Front led by the French Jewish statesman Léon Blum. He also met some British exchange students, including Robert Conquest, later a leading expert about Stalinist tyranny but at the time a devout Communist. Conquest suggested that Bernstein accompany him on a trip to Spain, where the Civil War had just broken out. Although already an avid anti-Fascist, Bernstein demurred on the grounds that his budget did not allow for side trips, and he returned home instead. As a teenager he was published in “The New Yorker,” after the intervention of a family friend, the American Jewish playwright Moss Hart.

During war service, chiefly as a correspondent for “Yank Magazine,” he got into hot water with Army brass by infiltrating German-occupied Yugoslavia to interview Marshal Tito, then an anti-Nazi resistance fighter. Discharged by the Army for this unauthorized exploit, later reprinted in his first book, Keep Your Head Down (1945), Bernstein was offered the choice of returning home or participating in the D-Day invasions. He chose the former, again opting out of danger and confessing to “Brooklyn Rail” in 2011, “I always felt a little guilty about that.”

“Keep Your Head Down” led to work in Hollywood assisting director Robert Rossen (born Rosen on the Lower East Side) and producer Harold Hecht. Bernstein soon co-authored with Ben Maddow, another writer who would be blacklisted, the 1948 film noir “Kiss the Blood off My Hands.” By 1950, Bernstein’s name was printed in “Red Channels,” a publication which attempted to expose Communists. Bernstein, who had joined the Party after his return from the war, did not disavow Communism until the Soviets crushed the Hungarian independence movement in 1956.

Despite the resulting blacklist, as he later recounted in “Inside Out: A Memoir of The Blacklist”, Bernstein continued to write television shows, using pseudonyms and fronts (people who agree to sign his work with their names). By 1959, when the director Sidney Lumet hired Bernstein to work on the screenplay for a Sophia Loren movie, the worst of the blacklist was over for Bernstein, and he returned to penning socially relevant films such as “Paris Blues” (1961) about the racism African-American jazz musicians faced at home. Displaying a genuinely subversive creative spirit, Bernstein wrote an epic of Cold War paranoia, “Fail-Safe” (1964), also directed by Lumet, about a nuclear crisis.

Preceding George Clooney’s “The Monuments Men” (2014) by a half-century, Bernstein authored the screenplay for “The Train” (1964), dealing with Nazi-looted art.

Bernstein’s resolve to address social justice in his films led him to write and co-produce “The Molly Maguires,” (1970) the true story of Irish-American coal miners resisting capitalist exploitation. “The Front,” for which Bernstein was Oscar-nominated, included a tragic wordless scene in which Zero Mostel, himself a real-life victim of the blacklist, played a despairing blacklisted comedian who throws himself out of a hotel bedroom window.
This profound emotion reaction to historical truth was also present in Bernstein’s script for “Miss Evers’ Boys” a 1997 HBO film based on the Tuskegee experiment, a U.S. Public Health Service initiative from 1932 to 1972 that targeted poor African-Americans, many of whom were infected with syphilis. The volunteers thought they were receiving free health care, whereas the purpose of the study was to discover results of entirely withholding treatment.

In his nineties, Bernstein continued to develop screenplays, one on Richard Nixon’s 1950 dirty tricks senate campaign against Helen Gahagan Douglas (whom he implied had Communist sympathies), and a biopic about the leftist American Jewish lawyer William Kunstler. Having missed witnessing the Spanish Civil War and D-Day assured that Bernstein, a gentle, spoken presence, survived to create these and other screen stories.