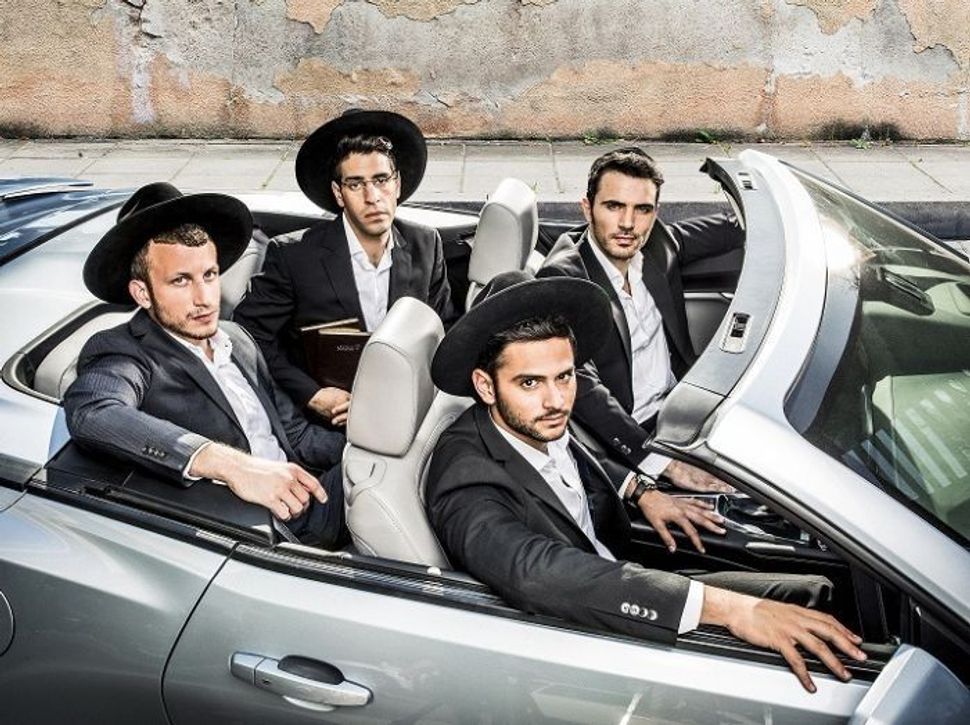 “The New Black,” which goes by the name “Shababnikim” in its original Hebrew, was a hit in Israel when it came out in 2017;. Airing on Israel’s HOT network, its views outstripped even popular foreign shows such as “Game of Thrones.” Now it is being released in the U.S., with English subtitles, accessible to a whole new audience.

The show, created by Eliran Malka, follows four Haredi men in a yeshiva. But unlike most recent depictions of the Haredi community — such as “Shtisel” and “Unorthodox” — this one doesn’t paint life inside it as a struggle against repressive norms. Instead, the boys are fun-loving mischief-makers in snazzy suits, and the show is just as much about flirting and money and privilege as it is about religious belief and the limits of Haredi society.

The show is being released with English subtitles on ChaiFlicks, a streaming service launched in 2020 featuring Jewish and Israeli content, writ large. This means the likely audience for “The New Black” is a self-selecting Jewish one, not the wide breadth of American society that shows such as “Unorthodox” reached.

Much of the show’s popularity and cleverness lies in its interrogation of subtle divisions within Israeli society — nuanced variations that viewers outside Israel might not fully understand. The references that made it successful in Israel may make it hard for a foreign audience to appreciate.

The show’s four main characters all come from different sectors of society. Avinoam Lasri, the gang’s ringleader, is the wealthy son of a Mizrachi Knesset member; he has little interest in serious Torah study and struggles with his crush on the secular waitress at a nearby cafe. Dov “Lazer” Brown, the only Ashkenazi of the group, is the son of a wealthy American businessman who excels academically but has a rebellious streak. Meir Sabag, the son of a shopkeeper, is from a lower economic class; though he is religiously devoted, he struggles with study. And finally, there’s Gedaliah — last name oddly unspecified — a far more devout student than the other three, who was forced to room with the troublemakers.

The group has numerous misadventures, meeting a movie star in a Brooks Brothers in Tel Aviv and burning a billboard featuring a scantily-clad woman, but the bulk of the plot consists of the relationship between the men. They navigate their socio-economic privilege and the hierarchy of Haredi society, quibbling over the matchmaker they use and whether Avinoam should flirt with his waitress, always justifying their positions with bits of Talmud. Religion is a factor in their lives and relationships, but only one of many.

While the show adds sidebar explanations for some of the more religious terms used in the show through somewhat ungainly pop-up graphics — the target audience in Israel was secular — some of the social nuances may be harder to appreciate for anyone who has spent little time in Israel. And even with the explainers, the religious references and jokes can be hard to parse without some familiarity with the finer points of Jewish law.

The appeal of the show in Israel seems to be its ability to demystify the complex world of Haredi society, which most citizens see only from the outside. Walking down the streets of Jerusalem, the differences in clothing are apparent, but few wonder about the divides, painting all of Haredi society with a similar brush.

But despite the homogenous outer appearance of Haredi society, the show presents a very different internal world. I, for one, had little idea of the internal hierarchy that characterizes Haredi society. Yet for viewers outside of Israel or, perhaps, Brooklyn, for whom enigmatic black-hatted men have never been part of the scenery, curiosity about the Haredi world is less likely to be a driving force.

Chances are good that ChaiFlicks managed to snag “The New Black” because other, larger international distributors were worried about its ability to translate across cultures, despite its high ratings in Israel. But that may have worked out for the best; ChaiFlicks’ audience is a cross-section of exactly the international audience most likely to enjoy the show and chances are good that it will be a hit for the new platform.

Even if half the jokes go over viewers’ heads, the friendship between the boys and their struggles with family are compelling; I first watched it in Hebrew and I missed half the dialogue (they talk fast!) but I still followed all the main plot points. American audiences might like it for different reasons than Israelis, but the themes of desire, yearning, family and community are universally relatable.

For the past few years, “Shababnikim” was hard to find with English subtitles; American Jews who heard of it from friends couldn’t watch it without fluent Hebrew. Now their patience is rewarded — and just in time for the second season to enter production. Israelis had to wait years between seasons but we will get nearly instant gratification.

Mira Fox is a fellow at the Forward. You can contact her at fox@forward.com or on Twitter @miraefox.