If you’ve spent any time in Jerusalem, you’ve seen these young men before.

Sometimes, they appear in the Mamilla mall, ecstatic to be out on the town. You’ll see them on the public bus, or at a ‘mehadrin‘-kosher pizza shop, wearing identical black hats and holding the ubiquitous Israeli plastic bag.

Finally, the Israeli TV viewer is getting a glimpse into the life of the Haredi yeshiva boy, in the hit show “Shababnikim” (slang for ‘yeshiva drop-out’), written by Eliran Malka and Daniel Paran and produced by the Israeli HOT cable company.

The four protagonists are roommates in a Jerusalem yeshiva: Avinoam is the suave son of a powerful Sephardic Knesset member; Dov Laizer is the caustic-tongued son of a wealthy Ashkenazi businessman, planning to become a lawyer; Meir is the bright-eyed son of a Sephardic storekeeper; and then there is Gedalya, the nerdy scholar among these bad boys, plagued with a photographic memory and a very desperate sexual desire. 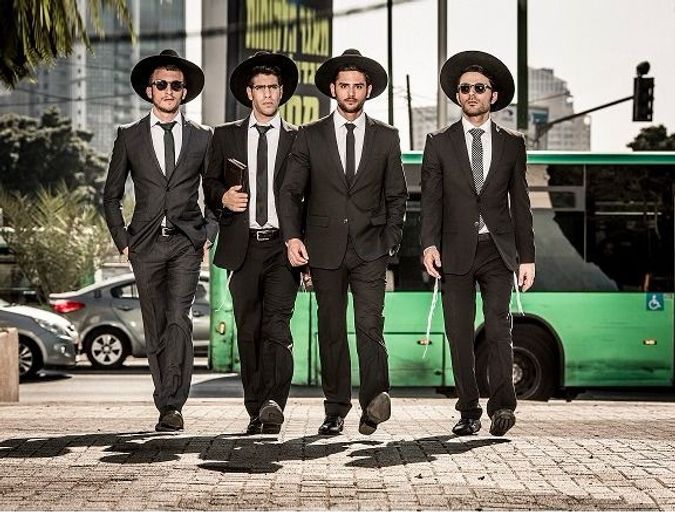 The four young men struggle with the tensions between the yeshiva’s safe insularity and the real world of turmoil outside, in scenarios that are extremely improbable: The boys set fire to a billboard picturing a scantily-clad model; the Haredi son of an MK is seeing a secular waitress secretly; the newly-appointed rosh yeshiva Shpitzer is a Harry-Potter-esque villain who is bent on expelling the protagonists; a young Orthodox woman is a brilliant Talmud scholar who secretly publishes academic articles under a pen name.

Yet under all of its absurd hyperbole, the truth emerges.

Throughout the series, the students encounter different prototypes of Israeli Jewish society: The embittered secular IDF soldier, the national religious Jew with a white yarmulke — and of course, the women who wield power over them, secular women, brilliant women, wealthy women – and beautiful women.

But perhaps what is most fascinating — more than any other recent Israeli cultural representation of Haredi culture, whether the YES hit show ‘Shtisel’ or Rama Burstein’s film ‘To Fill The Void’ — is the portrait of the yeshiva world’s social hierarchy, in all of its complexity, something rarely if ever portrayed on the Israeli screen.

Gone are the monastic apartments, the harsh lighting, the dirty streets of Mea Shearim, the ratty suits, the terrible wigs.

The drama of the unenlightened ultra-Orthodox — and the secular viewer’s schadenfreude in watching it — is passe.

This is the “Haredi HaHadash”, the New Haredi.

Here is the luxury SUV. The fitted Brooks Brothers suits. The lively cafes and the iPhones. Here is the cool yeshiva student dating the hotelier’s daughter; the wealthy kid taking his friend out for steaks on his dad’s bill. The yeshiva student is no longer an ‘other’; we see a group of young men, just like any others, searching for themselves, experimenting, listening to Shlomo Artzi music, sipping Nespresso and smoking late at night in their tzitzis.

This is a Haredi lifestyle that is becoming more and more a reality in Israel — and has long been the reality in America, too — as more Haredim enter the workforce and use the Internet, and as living standards are on the rise. (Simply open a Haredi periodical, peruse the ads, and you’ll see the aspirations — five-star Passover vacations and Italian designer shoes.)

And there, lurking underneath those Borsalino hats, is a rigidly tiered society — a caste system that follows unspoken rules.

The Haredi system is a relic of an old world order, of hardlined gender roles and clearly defined classes. It’s Edith Wharton, except in Hebrew and it’s 2018, and the romance takes place not in the Astor ballroom but in the King David hotel lobby over a glass of Perrier.

Here’s a very rudimentary guide to these classes, as I’ve observed:

The first tier of this society is, what I call, “Torah U’Gedulah”, or the elite: These are the real ‘gedolim’, the great rabbis, few in number but huge in stature, including heads of the best yeshivas and chief rabbis; the very wealthy businessmen, whom we call balabatim (literally, “householders”), who bankroll the system (like Laizer’s father); and the politicians — Knesset members (like Avinoam’s father) and heads of major political organizations.

Their children will marry within this tier; a wealthy in-law will support the young couple, enabling the husband to study in yeshiva full-time. The balabatim have freedom to do as they please, pretty much, as long as they write a regular check to the yeshivas; they are permitted earthly pleasures like long blonde wigs and luxe European hotels, and their sons do not have to be especially bright to be accepted to the yeshiva, either — no different from some purchasing admission to Harvard.

Occasionally, you’ll find the nonconformists here, individuals who feel confident enough in their social status to express different views — this is how the Adina Bar Shalom’s are born.

The next tier is that of the local leadership — the educators; the village machers and fundraisers; the newspaper editors and bloggers; the ones who influence the masses; who appoint themselves to speak on behalf of the gedolim (who lead more cloistered lives, poring over books day and night), many times espousing even more conservative views than the actual leaders themselves.

The rosh yeshiva is confronted by the students. Image by HOT

This is ‘Shpitzer’, the head of the yeshiva in ‘Shababnikim’ – a stickler administrator determined to make the boys into serious ‘Haredim’. And this is also where the ‘Gedalya’s eventually graduate to — good students, though not brilliant or connected enough to head a yeshiva, who are eventually placed as rebbes in a yeshiva somewhere in peripheral Israel. This is where your seminary rabbi who railed against college education comes from; he graduated from the system, but never got to the top (thus relying on zealotry, to prove himself).

The final tier — “amcha”, or the masses. These are the ‘Meir’s, the simple God-fearing people, devoted believers in the rabbis, evangelists for the cause. These are the baalei teshuva (those who chose to become Orthodox), or those without money, or those without lineage. Nonconformists will occasionally arise here, too, from the margins — yet will rarely make much of a dent when talking about social reform, given their low political clout.

It is from here that the movement of the ‘New Haredi’, of the educated professionals, has emerged, from the masses who have been fed up with living in poverty as lifetime yeshiva students.

Between these classes, social mobility exists only through Torah study (which is, of course, limited to men): Orthodox society is a meritocracy only when a brilliant yeshiva student, from a lower-class family, can marry into the first tier, in what is the ultimate Cinderella story.

These tiers are most vivid in the shidduch (‘matchmaking’) process, as “Shababnikim” illustrates. Prices are set on yeshiva students’ heads for prospective bride’s parents to assess: the brighter the boy, the more expensive he is. In a recent Amnon Levi exposé on Israel’s Channel 2, students in Jerusalem’s elite Hebron Yeshiva (its acceptance rate is notoriously low), told Levi, without blinking an eye that they are worth “600 [thousand shekel, about $179,000]”; another said, “600,000, that’s a minimum, it could go as far as 800,000 [about $226,000]”.

Rarely will a match cross class lines or, in Israel, racial lines. Shababnikim’s love triangle shows this best when the poor, Sephardic Meir falls in love with Ruth Gottlieb, who is very wealthy and very Ashkenazi, and who has been set up with the much more suitable Dov Laizer. Ruth and Meir in ‘Shababnikim’. Image by Screenshot

“Meir, this is how it works. I didn’t create this system, okay?”

It’s the age-old story of forbidden love — where else would one find this sort of heightened drama today, if not in a religious community?

This sort of hierarchy is the price of living in a community that is so tightly-knit, so committed to one another by divine covenant. When people choose to be constantly connected to one another, through an exchange of spiritual and monetary values, some sort of order inevitably evolves.

And for better or for worse, this elitism has become the very social DNA of this community. It’s this elitism which fuels zealotry, yes, allowing fringe extremists to spit on those in uniform or riot in the streets.

But it is this pride which also keeps many young people within the fold – and which is so mesmerizing about “Shababnikim”, for both religious and secular viewers alike.

This pride oozes off of the main characters; it is deliberately instilled into young graduates of Bais Yaakovs and yeshivas — to be “Haredi” is to be a nationalist for the black-and-white army of Toireh. It is this pride which ensures that even the shababnik’s, with their swagger and hip hop soundtracks, will stick to the yeshiva world. Because this is where they will remain royalty, and where their future families will be cared for. After all, in the secular world, they will float unmoored.

Not long ago, those who sought to lead more modern lifestyles would leave the community altogether. But today, retention rates are rather high in the Israeli Haredi community, with only 7.1% of Haredim aged 20 and over, according to JPPI and a 2009 Israeli Central Bureau of Statistics census, saying they became less religious over the course of their lives — compared to 20-21% among other religious people and those who identify as traditional.

This is largely, I believe, because the outside world is becoming less ‘tempting’, with the phenomenon of The New Haredi, as ‘Shababnikim’ portrays so colorfully. Perhaps, these young men wonder, one can enjoy more and more of the wider world’s pleasures — both material and intellectual — while keeping one’s black hat.

That is — as long as you have the requisite social clout.