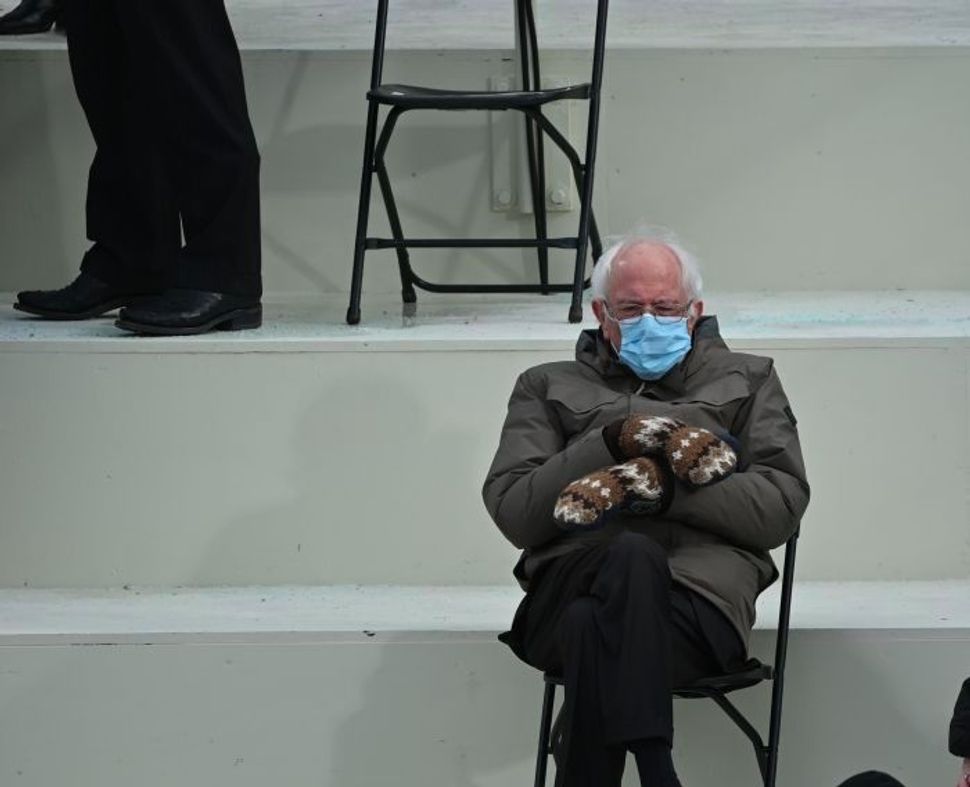 The now-famous picture of Bernie Sanders at the 2021 inauguration. Image by Getty

When my boyfriend sent me the first of hundreds of Bernie Sanders mittens memes I have consumed in the past 10 days, I was watching inauguration coverage and writing about Ella Emhoff’s coat.

I knew there were going to be a lot of great coats, and I enjoyed every minute I spent thinking about them: Not just Ella’s bedazzled shoulders but her father’s understated greatcoat, the Biden granddaughters’ monochromatic ensembles, Michelle Obama’s triumphant red wrap. The coats were very cool, and their coolness seemed to serve a larger purpose. Two weeks after an attempted coup, it felt especially necessary to mark a peaceful transition of power with all available pomp and circumstance.

Still, the coats were also part of a branding effort, bolstering their wearers’ political mandate by casting them as larger-than-life archetypes of style, confidence and affluence. These people hold power, the assembled outerwear seemed to say, because they are less ordinary than you.

That’s why the image of Bernie Sanders, slouched in his folding chair with a manila envelope clasped under one arm, was so endearing to me and to thousands of other Americans. Not because his eminently sensible Burton parka and recycled mittens constituted any kind of fashion statement — rather, because ordinary people might plausibly wear them at an event that was not a presidential inauguration. The posts that proliferated during and after the ceremony showed how easy it was to imagine Bernie into everyday situations: Waiting for his wife at Loehman’s, quibbling at the deli counter, or preparing to hand you a newspaper clipping you might find interesting.

Inside the envelope is an article Bernie cut out of the newspaper that he thought Biden would find interesting https://t.co/E2t7kYiPMN

Bernie’s just waiting for the shul president to finish announcements so he can go to kiddush already. pic.twitter.com/2MV20rkHEf

On a morning when power coats made political might seem synonymous with money, Bernie offered a sartorial antidote, a glimpse at another kind of civic landscape. So it’s ironic — although not totally surprising — that in just over a week the image captured by photographer Brendan Smialowski has been so instantly, thoroughly, commodified.

To be fair, Bernie kind of started it. Shortly after the inauguration, the senator’s office started selling union-made sweatshirts emblazoned with the photo, donating all profits to Meals on Wheels Vermont and a host of other organizations that provide food, dental care, and other essential services to low-income Vermonters.

When the Bernie-sanctioned merch sold out almost instantly, it became clear there was money to be made here. But companies seeking to take advantage of the moment had to adhere to charitable standards set by the senator — sort of. Getty Images, which owns the original photo, agreed to donate proceeds from licensing agreements to Meals on Wheels of America.

After a crocheted Bernie Sanders doll sold for $20,000 on eBay, the online retailer made an equivalent donation to the organization. The National Bobblehead Hall of Fame and Museum, which has sold 20,000 mitten-clad Bernie Sanders bobbleheads in the last week, made a $10,000 donation. (Contacted for comment, a representative said the company could not yet estimate the portion of profits that donation represents.)

But there are plenty of companies profiting from the image without making any charitable gestures, including some pretty unsavory ones: Some of the t-shirt retailers that the Forward found selling “Camp Auschwitz” sweatshirts after the Capitol riot are now hawking shirts emblazoned with the senator’s grumpy visage.

Intense identification with Bernie’s extremely ordinary presence at the inauguration gave his image its life and power as a meme. But the myriad opportunities that now exist to buy this image remind us how quickly popular sentiment can be commandeered for profit, how easily a viral moment can be sold back to the people who created it. Though a wave of high-profile donations has given the mittens’ rise a feel-good tinge, Bernie himself has gently hinted that funding essential services through private sector philanthropy is antithetical to his political vision.

“Even this amount of money is no substitute for action by Congress,” he said in a statement. Perusing the array of Bernie Sanders-themed mugs, magnets, stickers and greeting cards now available to me, it’s hard for to recapture the sense of energy I felt on Inauguration Day, when his unfussy appearance made it feel for a moment like that stage could belong to any of us.

But as long as we’re doing this, I have a plea on behalf of Janet Yellen, who literally brought her own blanket to the ceremony and deserves her moment in the sun: Can someone please put that woman’s coat on a mug?