How will history judge Trump and his enablers? You’re asking the wrong question. 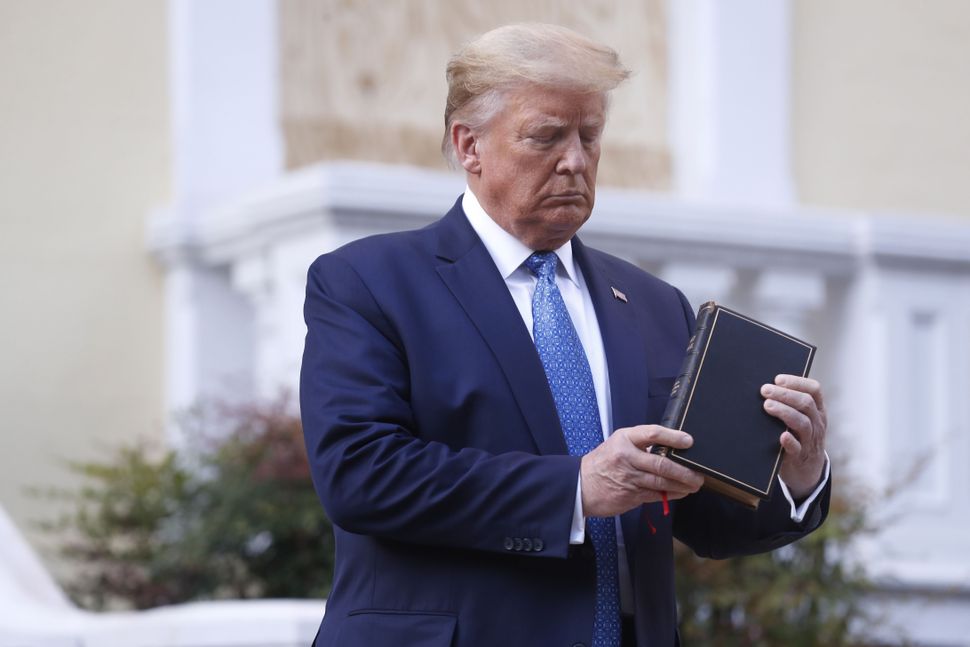 Trump and the Bible By Getty Images

From the day Donald Trump was ushered into the White House to the day he was ushered out, commentators have found comfort in the phrase “history will judge.” If they mean that historians will not look kindly on Donald Trump and his enablers, they are probably right. But right or wrong, their “judgment” will probably not matter to future generations. We need look no further than the tension between Jewish history and Jewish memory to understand why this is so.

In his brilliant book “Zakhor,” which examines the fraught relationship between Jewish history and Jewish memory, the late historian Yosef Yerushalmi claimed that the latter will always best the former. The Jewish imperative to remember — declensions of the verb zakhor ring out nearly 200 times in the Hebrew Bible — has long had little if anything to do with the writing of history. Until the modern era, Yerushalmi argues, Jews were less interested in establishing historical narratives than in establishing metahistorical meaning. With the destruction of the Temple in 70 CE, the rabbis had all the history they needed.

Yerushalmi’s insight oddly echoes the old joke about the two Jewish women complaining about a restaurant’s fare: “The food was terrible” says one; “Yes, and it was such small portions too,” says the other. So, too, with the Jewish response to history’s fare: The servings are few and terrible. From the fall of the Temple in 70 CE and the expulsion from Spain to the Polish pogroms and the Shoah, the servings of history have been traumatic. As a result, it is as if everything and nothing has changed over the millennia. If the prophets, writes Yerushalmi, had established the pattern to history based on the destruction of the Temple, it is a pattern that seems to have stuck with us ever since.

Medieval Jews, writes Yerushalmi, continued to “subsume even major new events to familiar archetype” through the early modern era. In the wake of the Spanish expulsion, Jews did not turn to history and historiography for comprehension, but instead to the Kabbalah for consolation. The mystical teachings of Isaac Luria offered an interpretation of history “that lay beyond history.” The desire for something more than history to explain history remains embedded in Jewish culture. Reflecting on the massive historiography of the Shoah, Yerushalmi more or less concludes that rarely have so many historians done so much to inform so few. Instead, most Jews have turned to literature and ideology in their search for meaning. The result, Yerushalmi concludes is that while many Jews are searching for a past, “they patently do not want the past that is offered by the historian.”

All of this casts a sharp light not just on the relationship between Jews and their history, but also between other groups and their histories. While commentators invoke history as the measure by which Trump will be judged, some of these groups have different measures in mind. Clearly, this is case with America’s religious right.. As Andrew Whitehead and Samuel L. Perry argue in their new book “Taking Back America for God,” this powerful movement embraces a “specific vision of Christianity’s relationship to American identity and civic life.”

We can add American history to that list of relationships. The Christian right is as dismissive of academic historians as early modern European Jews were of the few scholars who sought to base history on worldy, not other-wordly causes. profane history to explain 1492. Then and now, these groups thought traditional historiography irrelevant at best, invidious at worst. In fact, for Christian nationalists like mega-preacher Robert Jeffress, the real purveyors of myth are the trained historians. We are, in their eyes, a benighted profession either clueless or contemptuous of this country’s Christian foundations. “Our success,” he warns his flock, “depends on our country being faithful to those eternal truths of God’s word.”

What Luria’s followers and Christian nationalists share is the conviction that the past’s meaning is found not in material, political, or social changes, but instead in unchanging and transcendental truths. Then and now, history is not the study of events unfolding causally but instead, as Yerushalmi argues, “a series of situations into which one could somehow be existentially drawn.” No less important, for both groups, this approach to history seems to “endow the individual with the power to participate actively in hastening its messianic liquidation.”

The similarities end here, though. One crucial difference between the two religious groups is that the kabbalists did not participate actively by storming palaces and churches. Instead, they limited their participation in repairing the world to performing mitzvahs. As for the Christian insurrectionists, repairing the world means tearing it apart and terrorizing those still wedded to its reality. While Jeffress condemned the insurrection as “sinful,” he refused to condemn former President Trump” declaring: “I don’t regret for one minute supporting him.”

For those of us devoted to our democracy and our world, this moment has existential import. At such a moment, Yerushalmi believed, historians have a crucial role to play. But it is a role that demands an audience. If our books are to be read, we must write them for readers beyond the academy. We cannot succeed by continuing to write on narrow topics in turgid prose. The divorce of history from literature, Yerushalmi lamented, has been catastrophic for both Jewish and non-Jewish historical writing. “Those who are alienated from the past cannot be drawn to it by explanation alone; they require evocation as well.” The most urgent of mitzvahs that historians can perform is not to tell us — to judge — who is guilty or innocent, but instead to show us — to evoke — how we reached the point. This is the first step to take if we hope to avoid reaching such points ever again.

How will history judge Trump and his enablers? You’re asking the wrong question.