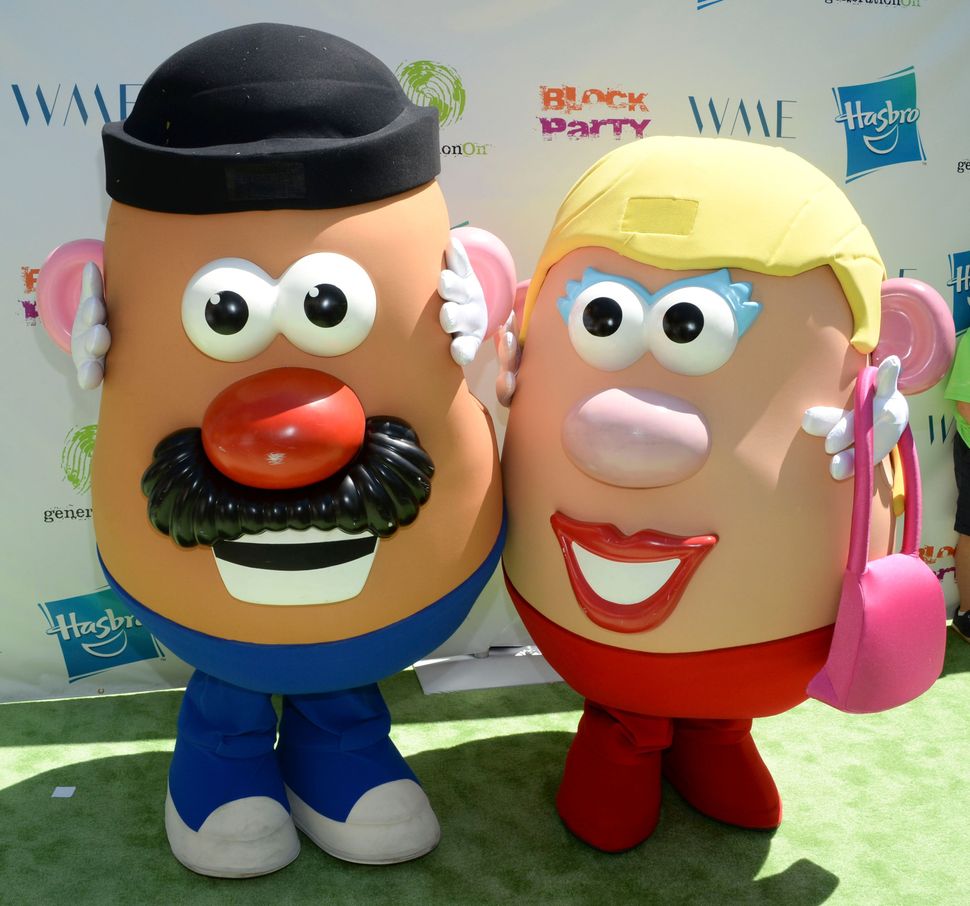 The discourse boiled over Thursday with the announcement that Mr. Potato Head products would be rebranded as the gender neutral “Potato Head.” Knowing that potato plants are hermaphroditic anyway, I welcome this inclusive marketing change. But let’s hash out one thing: I would like for Potato Head to still be Jewish.

If the idea of playing with a potato as a toy seems to have echoes of a Semitic childhood circa the Depression, there’s a reason. As JTA reported previously, Mr. Potato Head was the brainchild of a Jew named George Lerner who came up with the idea while puttering around his Brooklyn kitchen.

Born in 1922, Lerner developed the idea to make plastic facial features that could be inserted into produce around 1950. The toy didn’t take off at first — the postwar mindset didn’t take kindly to playing with pantry staples, — but eventually caught the attention of Polish immigrant brothers Henry, Herman and Hillel Hassenfeld (the Hasbros).

The original Mr. Potato Head kit from 1952 came with the features we know and a Styrofoam head. Instructions urged tots to place the pieces in taters and other veggies, much to the dismay of parents who complained about the rotting carcass of the patater familias. 12 years later, in light of new government regulations on sharp parts in children’s toys, true tubers were out and the plastic and — I might add — gender ambiguous, plastic body was introduced, By then, Mr. Potato Head had already been nurturing an 11-year marriage with the missus.

The Potato Heads, who aren’t going anywhere in spite of the name change, are certainly iconic. They offer children the chance to play at being Picasso and imagine a perhaps problematic conception of gender roles that the Potato Head rebrand is meant to remedy. In honor of the name change, Hasbro announced a new playset that will allow kids to create “all types of families,” not limited to the nuclear, heteronormative arrangement of the toy’s last seven decades.

That original dynamic was reinforced by the “Toy Story” franchise, which presented a grouchy, Jewish-coded husband in a bowler hat and a domineering — if by turns tender — wife with lipstick and a purse (who probably shopped at Loehmann’s).

The update doesn’t erase that history. In fact, dropping the honorific in front of Potato Head makes it sound like the sort of insult Don Rickles might use on a hapless audience member . What better way to honor that legacy?